Toto, we’re not in Kansas anymore. We’re in a warped, futuristic vision of homophobic Kansas on steroids. 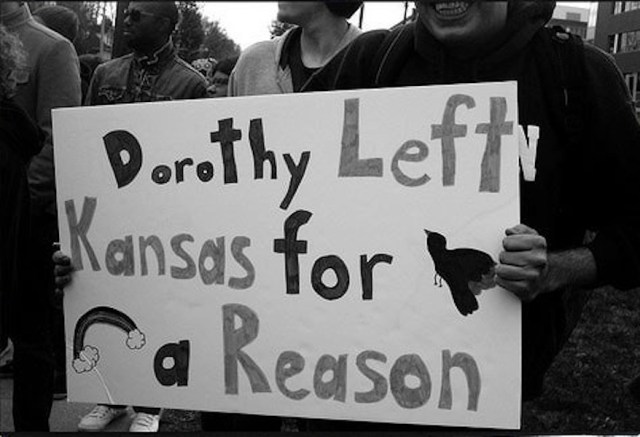 Last Tuesday, the Kansas House of Representatives temporarily lost their minds and overwhelmingly voted for a bill framed as “protecting religious freedom” which, in the end, (SURPRISE!) just legalizes discrimination against queer people.

Slate called HB 2453, which allows individuals, groups, and private businesses to refuse service to gay couples, fire gay people, and even block entry to buildings to folks based purely on their sexuality, “a blank check to discriminate.” The legislation is centered specifically around marriage and other forms of unions by same-sex couples, but because it was written to preserve “religious liberty,” all individual employees can use their own religion to justify discrimination — including cops, teachers, nurses, pharmacists, hotel owners, and doctors alike. Gay people could be banished from public life, one by one, employee by employee and business by business. No gay people in the park, no gay people in the grocery store, no gay people in hospitals or schools. People who attempted, as they inevitably would, to challenge anti-gay discrimination would get stuck paying the lawyer fees for their opponents. The legislation would bring a new era of segregation in Kansas. “If the bill passes,” Lisbeth Hunter wrote for Ryot, “gay people won’t be able to feel safe anywhere.”

According to the Movement Advancement Project, 79,979 LGBT people live in Kansas, and 26% of them are raising kids. Only 3% of the state’s LGBT population is protected from anti-gay discrimination — and only because they reside in the City of Lawrence. There is a ban on marriage equality for gay couples, second-parent adoption for gay spouses, and medical decision-making by gay life partners of patients in Kansas; no state-level legislation defines policies on adoption overall, anti-gay bullying in schools, family leave, housing discrimination, or workplace protections for gay people. HB 2453 didn’t need to pass; anti-gay segregation doesn’t need to be codified to be a reality of life. The state’s LGBT community was already siloed, stranded with no real legal leg to stand on.

Perhaps even scarier than the bill itself is how quietly it snuck by. Democrats seemed complacent and unwilling to engage in debate during the House vote, including the Minority Leader, who received  a verbal spanking afterward from gay rights advocates in the state.

“Kansans across the state are rightly appalled that legislators are spending their efforts to pass yet another piece of legislation that seeks to enshrine discrimination against gay and lesbian people into law,” said Sandra Meade, state chair of Equality Kansas, in a statement. “What is most disappointing about the House vote to pass this bill isn’t the vote of the conservatives who we know must appease their extremist base, but the lack of public action to oppose or amend the bill by those legislators who claim they sincerely oppose it.”

She added, “It’s unfortunate that discrimination against LGBT Kansans is seen as a distraction… rather than a call to action.”

Episcopal Bishops spoke out about the legislation as well in an open letter to the Kansas Senate after HB 2453 passed. “Some people regularly suggest that the Church should stay out of politics,” they wrote, “but we regret to observe that the current political agenda is encroaching upon fundamental principles that Christians, and people of all faiths, hold dear: compassion for the poor, safety for all people and equality for everyone.”

It was originally predicted that HB 2453 would make it all the way to the Governor’s office, where it would then become state law — at which point, gay folks would of course scramble to buy the last of the fair-trade coffee at the local grocery owned by a religious zealot and rush to rent U-Haul trucks from their Republican neighbor’s local franchise before word of the law had spread too far. As of Thursday, however, the nervousness of every queer person within the sunflower state was put to rest when Kansas Senate President Susan Wagle insisted to press that her compadres in the chamber would not let it pass.

“I’ve grown concerned about the practical impact of the bill,” Wagle said in a statement. Though she is no LGBT rights advocate (and preceded her reassuring remarks on the anti-gay monstrosity of HB 2453 with a promise that her Republican counterparts in the Senate still “support traditional marriage“), she was not fooled by the bill’s promise of religious liberty. “My members,” she explained, “don’t condone discrimination.”

HB 2453 was borne out of fear of a marriage equality challenge in Kansas, which makes the state the first to attempt to obliterate the constitutional freedoms of thousands of people rather than just stand up in court and admit that they wanted to all along. As we’ve explored here before, marriage equality is not the first step to gay equality, and indicates nothing insofar as LGBT rights by state. So what does it say about gay rights in Kansas when lawmakers scramble to legalize discrimination rather than confront the reality of anti-gay discrimination at all levels occurring in their government, private economy, and personal lives? What does it mean for gay rights advocates in the state when one simple request — the right to marry — turns into a free-for-all on their human rights?