If you watched the Grammys last month, you’re well aware that harnesses are making their way out of the dungeon and into the streets (or at the very least, into your sheets). While mainstream companies are cranking out cheap, “kinky chic” designs, independent queer designers are meeting the demand with harnesses that are fashionable, functional and hand-made for folks of all sizes.

If you’re a Chicago queer, you’ve probably fucked in an Emma Alamo harness. Her leather and vegan leather designs are worn by dancers in Chicago’s annual cabaret with a cult following, The Fly Honey Show, and her custom pieces have been modeled by queer notables like Jacq the Stripper and Theo Germaine. Thanks to her Etsy store, these Chicago-made harnesses are available to kinksters everywhere.

The babe behind the buckles is Emma Alamo — a queer creator, a recovering alcoholic, a proud power bottom and business owner with serious hustle. Emma welcomed me into her studio and talked about social media, body image and building a career selling bondage gear.

Malic: Tell me about your creative background.

Emma: I was making stuff as soon as I had the motor skills to hold a crayon. I was always the weird art kid starting in elementary school, and then I went to MICA (Maryland Institute College of Art) in Baltimore and I changed majors a hundred times. I started out in painting and photography, and I ended up with a degree in sculpture. I mostly did woodworking. For most of my 20s, I was a set designer and theater carpenter. I had to stop doing that when I got really sick five years ago. Being in a woodshop all the time… it’s not good for you.

It was sort of like an episode of House for four years trying to figure out what was wrong with me, but being in a wood shop was not helping. You can’t have a chronic respiratory disease and be a woodworker. So I had to quit doing that, and I was a sad drunk about it for a couple of years. Then I started working with leather instead.

What were some of the first leather items you made?

I started making myself utility belts when I was 21. The first one I made was made all out of trash things, stuff I got out of free piles. I took apart an apron, a dress and a handbag. I really liked that it was three stereotypically “woman”-coded things. I called it my “tool belt.” I would wear it every day and people always asked about it, and I was like, “Oh, yeah, I’ll start an Etsy page one of these days.” But I didn’t until I was 28.

What led to you making harnesses? Are harnesses just the next logical step after tool belts?

Basically, when I got sober and was like, “I’m going to get my life together. I need to find something new to do because I can’t do woodworking now.” People were asking about this utility belt forever, so I started making utility belts and jewelry. I was making the jewelry out of chain and the utility belts out of leather, mostly. I was just dicking around and made a few harnesses. I posted pictures online, and everyone was like, “This! We want this!” I was excited to do it. It’s definitely not what I thought I’d be doing. It turns out people are willing to spend a lot more money on their sex lives than hipster fanny packs.

Who makes up your customer base?

Predominantly women and queers in their 20s and 30s. There are also a lot of older, straight swinger couples at the conventions I go to. I sell probably more than half of my stuff in person. I go to a bunch of different kink conventions.

Why do you think you sell more of your harnesses in person?

I’m so much more likely to sell something to someone if they try it on. I think part of that is because I really put in a lot of effort into making my stuff comfortable. I bevel the edges. But also, my stuff is flattering. In person, I sell mostly to plus-size women. I think part of it is that they don’t see a lot of people carrying stuff that fits or flatters their bodies. 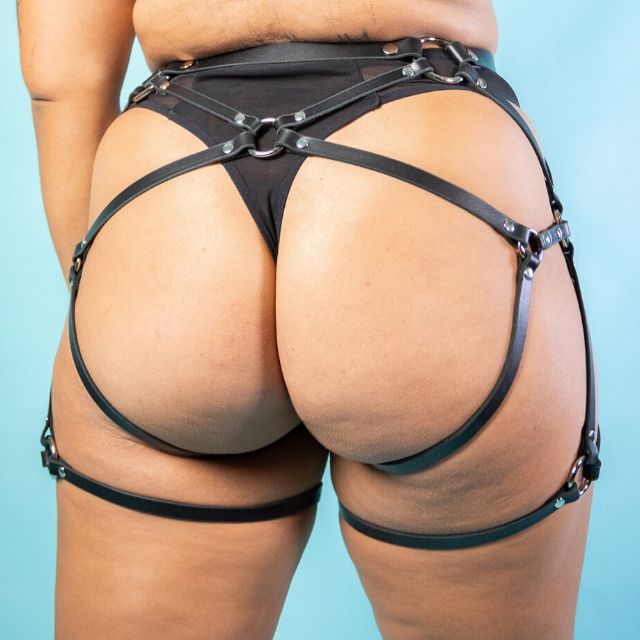 I had an eating disorder in middle school and high school, and I’ve struggled with body dysmorphia my whole life. Even still, when I’m shopping for things, half the time I’m looking at the models and I forget about the garment I’m looking at. I’m just like, “I wish I had that body.” I try to beat it out of me and therapize it out of me.

I think it’s important when you’re shopping for something to be able to see yourself in it, to see your body in it. That’s part of why most of the women and AFAB people of our generation have eating disorders or some kind of body dysmorphia —it’s because we’re shown over and over again just one body type. Even if you carry a little bit of weight, you have to carry it in a really specific way. I think it’s empowering to see different sorts of bodies being shown as “hot,” because it’s easy to think that if you have a body that doesn’t look like the American, conventional form of sexy, that you can’t be a sexual person.

A harness is such a great symbol of sexuality. You make some harnesses that are functional and some that more… wearable out on the town?

Some of them are really thin leather and have elastic in them and are just for looking sexy.

Are fashion harnesses a gateway to kink?

Oh, yeah. It’s funny when I do pop-ups in places that aren’t kink-oriented and people are like, “Ooh, what are these for?”

And then you become an unintentional kink educator? 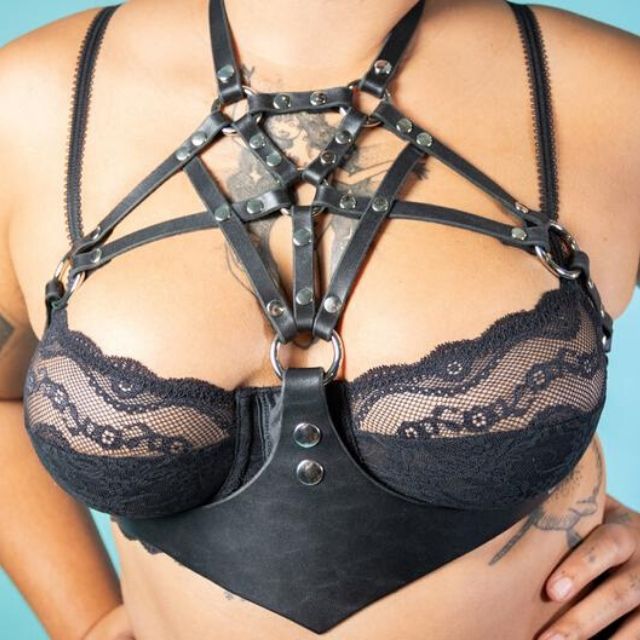 Your harness business took off really quickly. Why do you think that happened?

Because I hustled my ass off. I think that’s the main reason. But also, like I said, I decided to start a business when I quit drinking, and I funneled that energy into this business. I guess you could say I became a workaholic instead of an alcoholic. But I think it was a really important part of my recovery. Making things with my hands is really important to my mental health, and I just became really passionate about it and fully threw myself into it. Also, when I quit drinking I lost part of my identity, too. I started doing this and really liked it.

How do you want people to feel when they’re wearing your harnesses?

Sexy. Powerful. Emboldened. There’s something about leather that makes you feel powerful — even the smell of it, the experience of it — whatever “powerful” means to you. As a sub, I feel powerful when… I guess I’m a power bottom. I feel powerful being restrained. I want people to be more in touch with their desires and their bodies.

What are some of the challenges that you face marketing your harnesses on social media?

Well, social media fucking sucks right now. Since FOSTA-SESTA passed, Facebook and Instagram have been cracking down hard on anything that has to do with sexuality, and it ends up being super biased towards women, especially plus-sized women, women of color and queer people. I’m currently partially shadowbanned on Instagram. For a while, I was fully shadow banned — you couldn’t search for me. The last time I had a picture taken down, they were like, “If this happens again, your account may be deleted.”

I follow all the rules. I specifically take pictures where people are covering their boobs so I don’t scandalize anyone with a dreaded female nipple, and still those pictures will get taken down. And there’s nothing you can do when you get a picture taken down. You can click a button to challenge it, but it doesn’t do anything.

If you could show whatever you wanted on Instagram, what would you do with that?

I’d definitely have a lot more nudity, but I’d still keep it classy. I think it’s actually more sexualizing to have someone with pasties over their nipples than to to have someone topless. I think it sexualizes someone more to be like, “Oh, no, we can’t show these two square inches of this.” 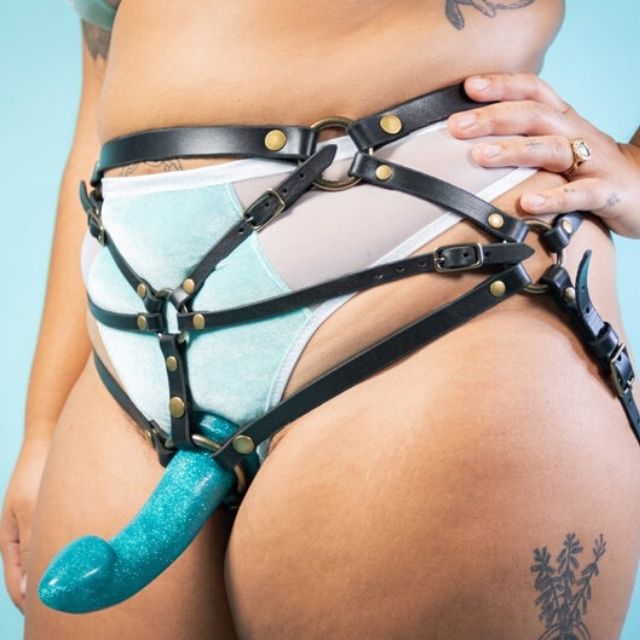 Exactly. Nipples are the new ankles. Put that on a bumper sticker.

Pubic hair is another thing that can get you flagged on Instagram, which makes me so mad. You can have a woman who waxes everything in a tiny bikini and that’s fine, but if you have a person who doesn’t alter their body to fit this beauty standard in the same bikini, that’s considered vulgar. We’re just penalizing people for simply having bodies — for being mammals.

Do you have any words of advice for someone who’s ready to get their first harness?

If you’re trying to get one for fucking, the bottom ones are definitely more fun. Having a bottom harness really allows your partner to manipulate their body. It adds handles to your body, so you can really be tossed around. I’ve also had couples buy those when the dominant one is a lot smaller than the subbier one. It allows you to feel bigger because you have more power over the other person’s body.

Usually when I think of a bottom harness I’m only thinking about strap-on fucking. I don’t think about lifting my sweetie like a suitcase.

Yeah! It’s like having reins on them. You can fuck someone really hard. It’s great! Also, to any woman who sleeps with men — peg your boyfriend. It’s amazing. I was making and selling strap ons before I’d ever pegged a guy, and oh man. I love having a dick.

To learn more about Emma Alamo or to find out where she’s selling her wares next, follow her on Instagram and Twitter. If Emma won’t be in a city near you but you want to take a harness for a ride, visit Emma’s Etsy page.

Ro has written 87 articles for us.