Another day, another protest. If you gazed upon the streets of Paris this weekend you would have seen a familiar scene: long lines of people shouting and hollering over same-sex marriage. It happened a month ago, it happened a few weeks ago, so really there’s no surprise that it’s happening again. 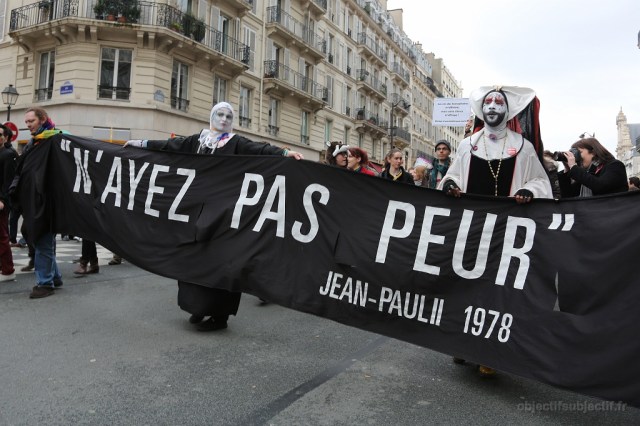 Be Not Afraid Via Pierre Goyard 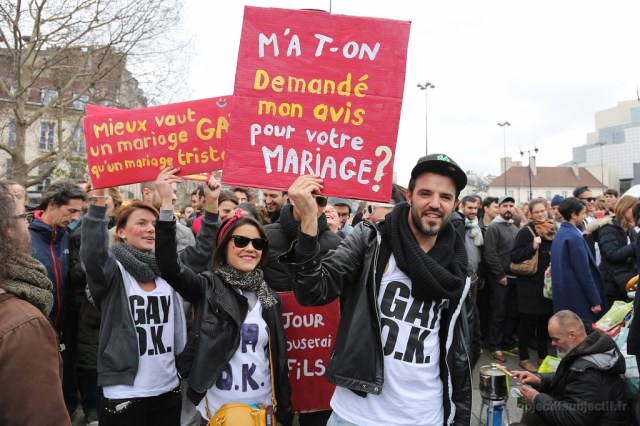 Did you ask for our opinion on your marriage? Via Pierre Goyard 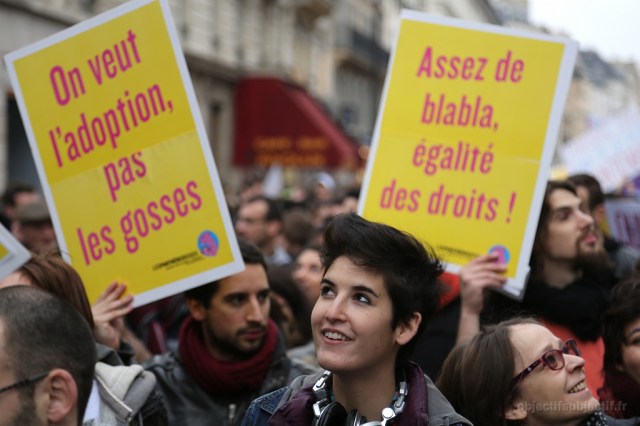 We want adoption, not your balls/kids Via Pierre Goyard 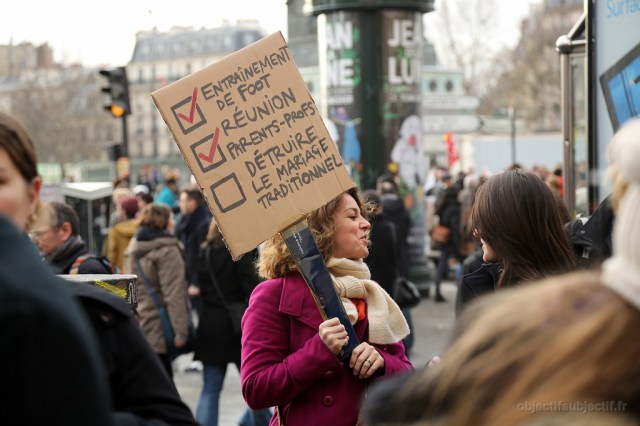 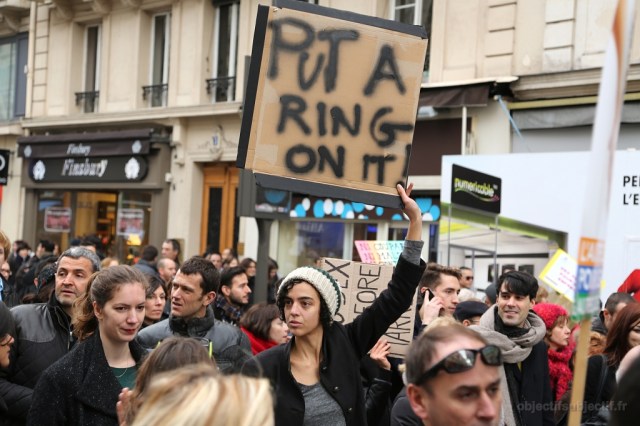 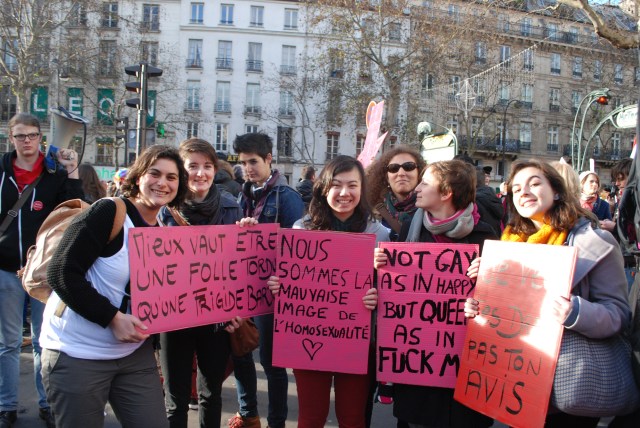 Inter-LGBT, Fédération LGBT and Coordination Interpride-France teamed up to organize a series of weekend rallies throughout France. Up until now, conservative anti-gay citizens had claimed the title of vocal majority and used it as a platform for their ludicrous claims. To prove that the VITA Alliance didn’t speak for everyone, same-sex supporters showed they could put on an equally impressive march, even if they lacked the coordinated T-shirts. Organizers estimated more than 100,000 people took to Paris’s street on Sunday, which echos an IFOP poll result projecting that 60% of France’s population support same-sex marriages and 46% are in favour of same-sex adoption. 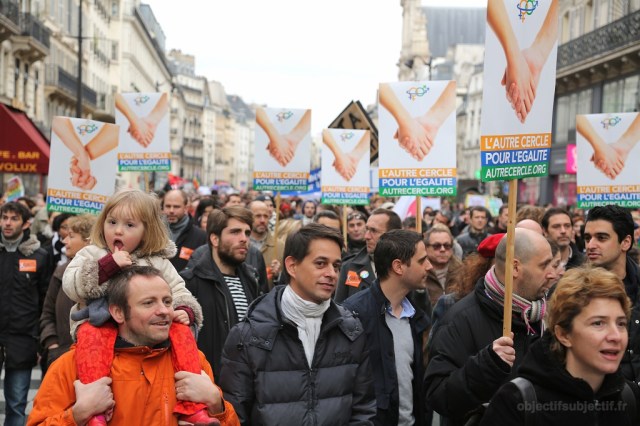 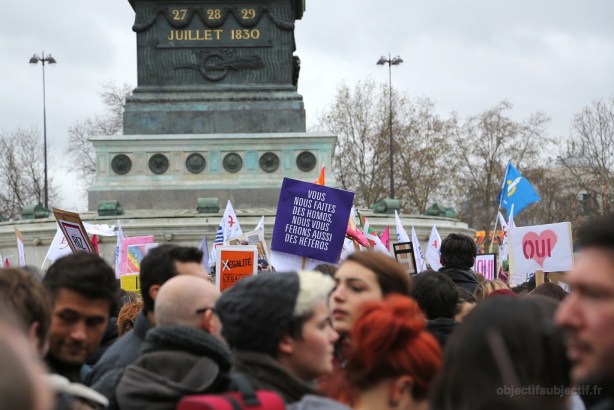 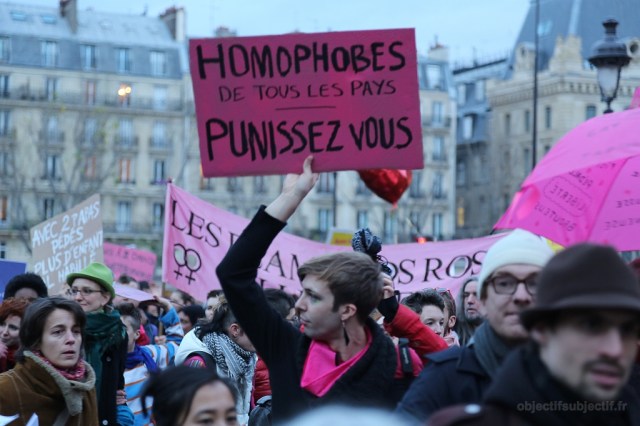 Homophobes from all countries – punish yourselves Via Pierre Goyard 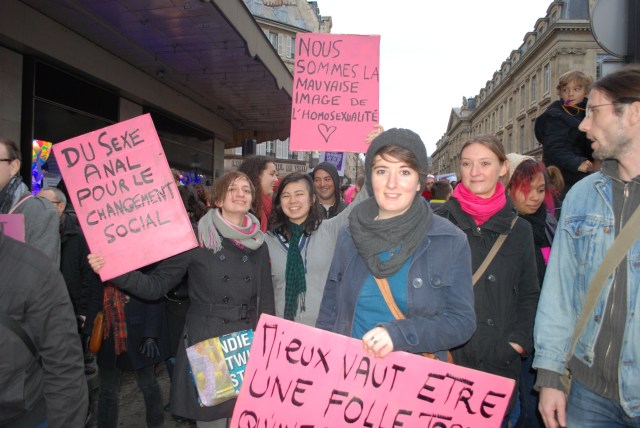 Even though the protesters were smiling and in good spirits, they weren’t ecstatic. The proposed same-sex marriage law is a step towards progress, but it still falls short of equality. The law extends rights to married couples, but what about families? While the VITA Alliance and other groups protest the law because it may hurt children that are born to same-sex couples, same-sex supporters worry that the law won’t do enough to protect kids and their parents. When it comes to same-sex co-parent adoption, non-biological parents would have to jump through a thousand hoops, including marriage, before they could say their kid was theirs. A heterosexual man would simply have to sign on a dotted line to say he was the adoptive father of his partner’s children. Amantine Revol, deputy president of the association Les Enfants d’Arc en Ciel expressed her concern,

We’re not talking about virtual kids, we’re talking about perhaps hundreds of thousands of children currently being raised in gay families in France who need legal rights. What is being proposed is not enough – couples would have to marry before applying to adopt their own children, which could take years. Gay co-parents need immediate legal recognition and the automatic right to be named on a child’s birth certificate. 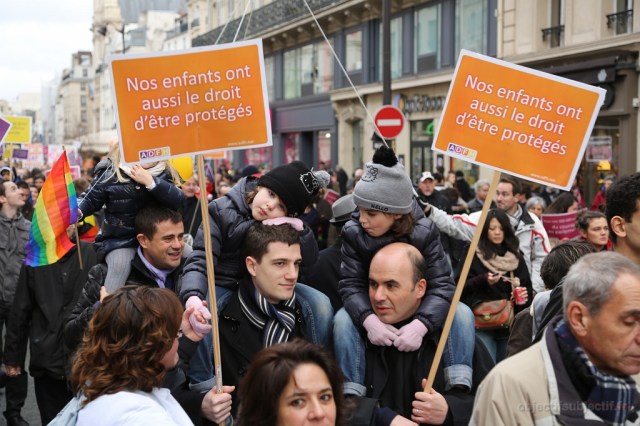 Our children also need to be protected Via Pierre Goyard 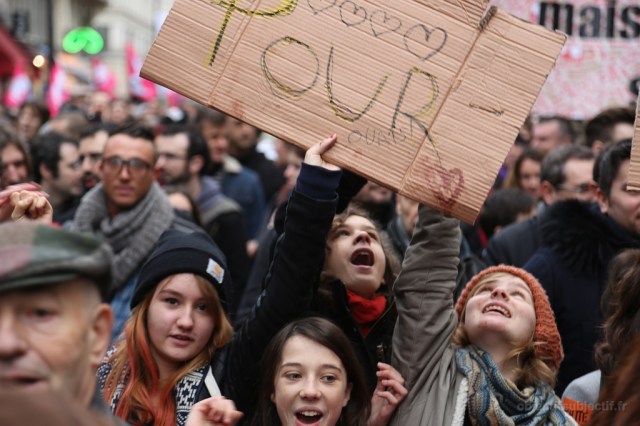 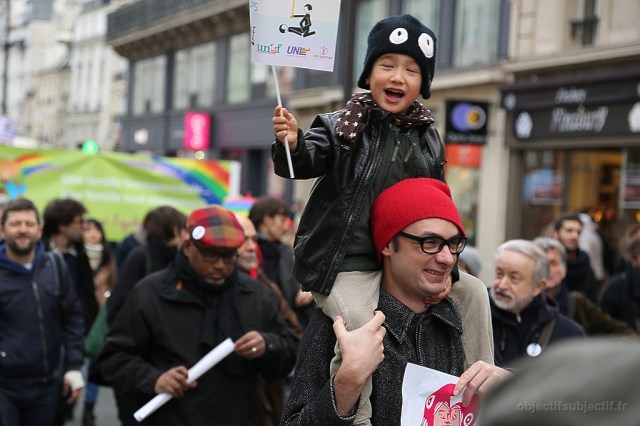 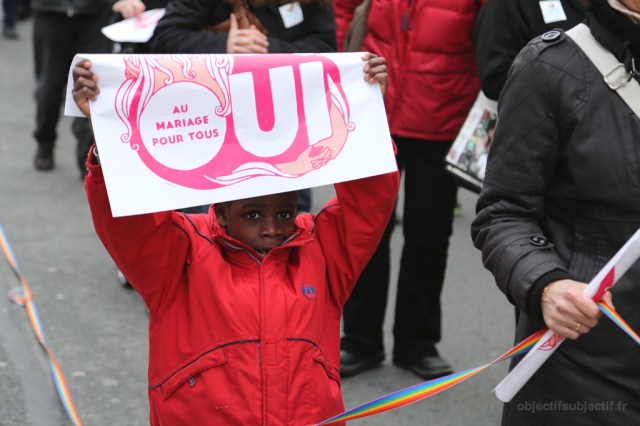 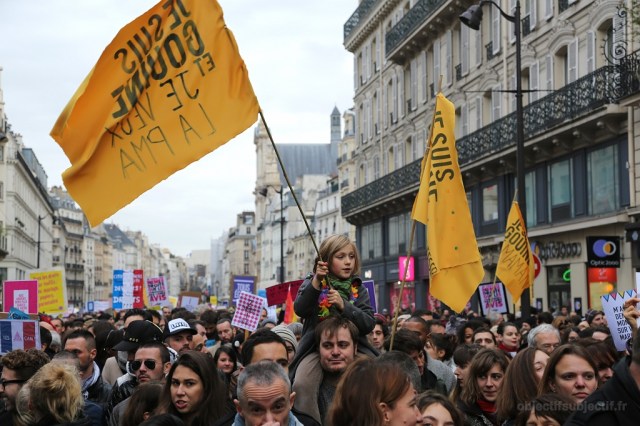 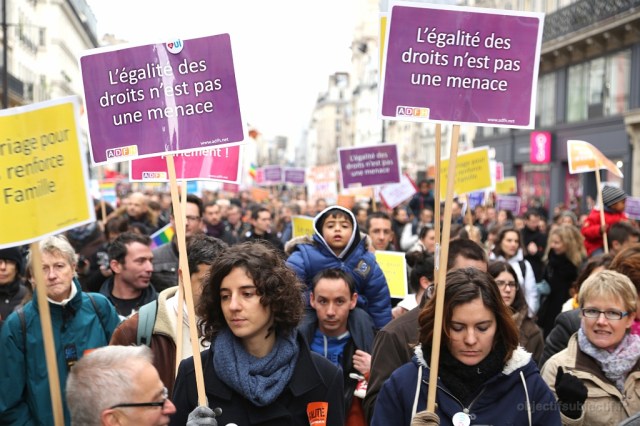 Equal rights are not a threat Via Pierre Goyard

This is a historic moment because it’s the first time a French government is moving towards more equal rights for gay couples and families. But we’re not celebrating yet because the proposed law still doesn’t give complete equality. We want equal rights to medically assisted procreation. We want legal rights for co-parents – that means full parental responsibility for people raising a child with their partner. We have urged the government not to bow to the pressure of the opposition against this law. We expected some to oppose it, but we’ve been shocked by the violence of the opposition – and the retrograde, cliche-ridden arguments bordering on insults.

There’s another month of hand-wringing and people-watching before French citizens see which side made a greater impression on Parliament and the people, but this weekend’s protests stand as message to Hollande that he can’t back down or fail those that voted him into office. We’ll see whether love or hate wins out in January when the anti-gay rally dons their gendered shirts once more on the 13th and Take Action for Equality walks on the 27th.