I thought we were past the point of making fun of Asian/Americans for having accents in mainstream media, but I guess not — somebody out there thinks it’s funny, and that one lonely person is Bob Oschack, a comedian and “investigative reporter” for Fox Sports, who conducted the entirely racist, supposedly humorous TV short titled Oschack visits USC that recently aired on Fox Sports.

In the short, Oschack interviews University of Southern California students under the premise of asking them how they feel about University of Colorado at Boulder and the University of Utah being inducted in the Pacific-10 football conference, of which USC is a member. “Let’s give the conference’s two newest members a good, old-fashioned all-American welcome!” he says — the not-at-all humorous setup is that Oschack selectively chooses East Asian students who are not native English speakers to give this welcome. The punchline: It turns out that by “All-American” Oschack means “Hey, look at all of these Asians who can’t speak English in America! Isn’t it funny?” 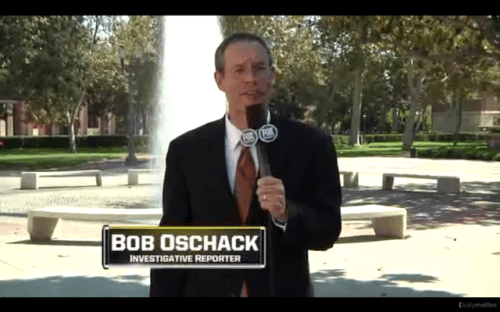 Oschack, for instance, singles out some students and plays the “What? I can’t understand you” game for laughs — he mishears certain words the English as a second language (ESL) students say, mistaking words like “ask” and “better” for “ass” and “Batman,” respectively. He corrects and questions the way students use English words like the word “fighting” — “Colorado and Utah and fighting … Fighting means to play better,” one student says, which Oschack responds with an overtly confused face and asks incredulously, “What’s that, fighting? … Do you like to fight?” He puts students on the spot to say scripted phrases, which result in grammatical slip-ups, only to correct them condescendingly: “Welcome to Colorado and Utah!” one student enthusiastically says, only to include Oschack responding, “No, you’re saying welcome TO Colorado and Utah. We’re in Los Angeles.”

The short even includes a section at the end where Oshack says, “Colorado and Utah, this is for you!” and trumpets begin playing dramatic fanfare over the spectacle of ESL students saying, in often thick accents, phrases like “Welcome Colorado and Utah to the top twelve!” — the spectacle here is not so much the enthusiasm these students have for USC’s football team but their odd pronunciation. What year is this? The ‘80s want their stereotypes back. 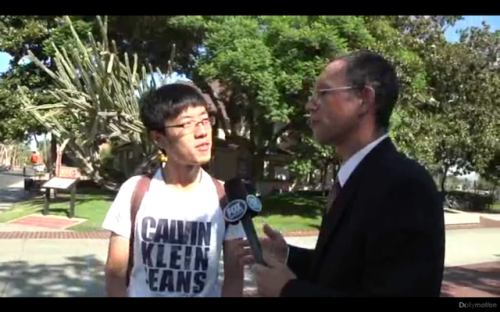 I’m not going to give Oschack the benefit of the doubt here. If he were seriously interviewing students about the Pac-12 and wanted an honest portrayal of USC and its student body, the video would have included a larger demographic than just East Asian ESL students who don’t follow American football, which puts the interviewed students in a position of ignorance by default. I’m sure that if Oschack wanted to interview a random sampling of students at diverse school like USC, he would have likely bumped into a native English speaker, or a student who loves USC sports — the video has selected clips that refuse to portray this, however. The short’s editing is also very telling — the video editor would have likely not included the copious amounts of corrections and uncomfortable responses Oschack says to the students if the aim were to not humiliate these unknowing students.

This isn’t funny. It never was funny. And the reason behind this? The other-ing of Asian/Americans through appearance, English-speaking ability and accent-related condescension by a privileged majority has been going on for years. Oschack finds irony (and lowbrow humor) in Asian ESL students delivering an “American” greeting from USC — because they don’t know anything about American football, don’t speak English “correctly” and have accents that are supposedly impenetrable to the average white guy (i.e. Oschack). Using this kind of humor to humiliate these Asian students, Oschack is really saying that modern American-ness is singularly comprised of speaking English, being white, having a Midwestern accent and knowing football inside and out. Seriously? It’s 2011. This Oschack guy is living in a John Hughes movie — Long Duk Dong be damned. 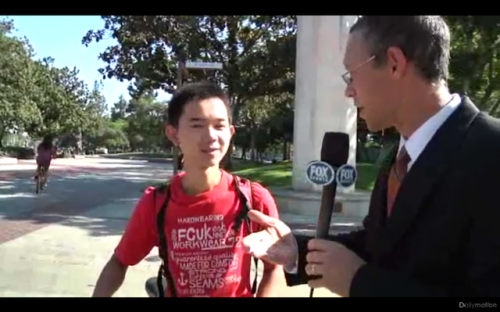 I was pleasantly surprised, however, with the general response to Oschack Visits USC — so far a few sports websites have blogged about the video, calling it overtly racist and not at all humorous, a response that’s good to see from the sports community. Total Pro Sports commented, “This isn’t even funny … I guess this is pretty much what many of us have come to expect from Fox these days,” and The 110 Report commented that the video is “really unbelievable. [If] they’re going to interview people not interested in football, why make it a racial profiling crusade? It’s uncalled for, unfunny and disrespectful to not only the foreign students at USC, but throughout our country.”

Because the general response was so overwhelmingly negative, Fox Sports immediately withdrew the video from official sources including the Fox website and Hulu before it could go viral. Deadspin followed up on the story by contacting Lou D’Ermillo, the Fox Sports head of media relations. D’Ermillo then released an official apology through Deadspin not long after:

“We sincerely apologize to President [C. L. Max] Nikias and the entire USC community for the production and posting of the video. The context was clearly inappropriate and the video was removed as soon as we became aware of it. We will review our editorial process to determine where the breakdown occurred, and we will take steps to ensure something like this never happens again.” 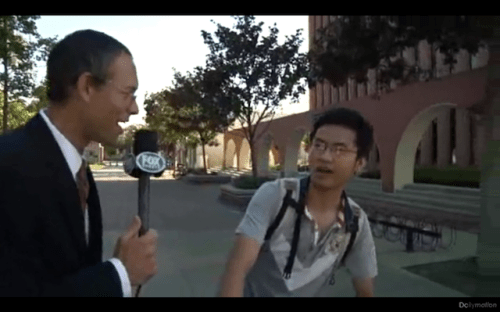 While I’m glad that Fox released an apology over this huge mess, I still wonder about Oschack — so far there’s no news about his employment with Fox Sports, but I’d like to report that Oschack’s charismatic on-screen personality has primarily been put to use in an acting role in the almost completely unknown 2001 movie Sharkman, starring Oschack as “Tim the Cartoonist.” On the glass-half-full side of Oschack Visits USC: I guess the cartoonist role in that unknown man-shark movie isn’t the lowest point of his career anymore.