I love portable gaming. This love affair started with the SEGA Game Gear, which is the approximate size and weight of a cinder block, runs on 6 AA batteries, and is the video game equivalent of Zack Morris’s cell phone. The Game Gear is what turned me on to games you can play while under the covers / in a closet when your family is having a family reunion. This was very important to my socially anxious social life growing up.

So what are the options now that we’re out of the technologically oversized ’80s? The Nintendo 3DS and DS – while I am a huge fan – are still a little unwieldy, large and conspicuous. This is part of what makes iPhone gaming so great – there’s still an element of stealth. Are you answering a pressing email from work? Or are you flinging frustrated birds at wooden shanties built by amorphous, egg-stealing, ball-shaped pigs? Are you texting your landlord about the water leak? Or are you dodging explosives while slicing up exotic fruit? Sometimes you just want to look like you’re doing something important to avoid enduring the uncomfortable conversation about sexual harassment your aunt is initiating at your grandma’s 80th birthday party.

Mobile gaming is probably the most portable of all the gaming options right now, particularly because your phone goes everywhere you go. While Angry Birds or Fruit Ninja are tried and true options for passing the time, there’s a great array of witty, interestingly odd games by smaller developers that range anywhere from “bro”-style, fist-bumping gothic Bram Stoker games to culinary undead mash-ups where you wheel a giant angry-looking pizza over an array of skeletons. Here are some you should check out: 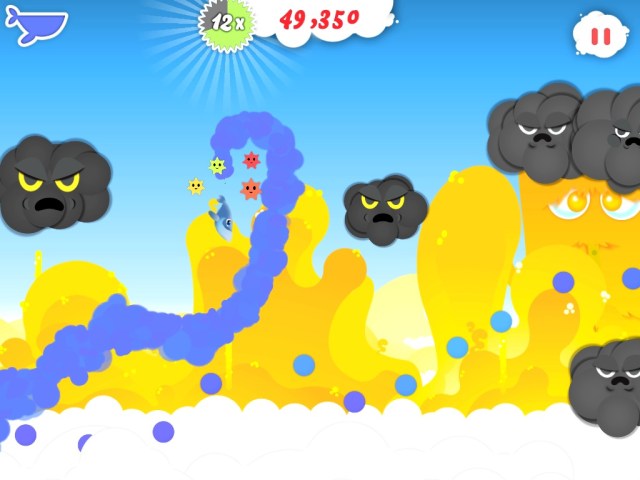 Would you believe it if I said that this game is about an airborne whale named Willow who collects rainbow stars and multicolored bubbles called Blubbles in a place called Rainbow Land? Believe it. This shit is real. In the beautifully designed game by ustwo, you use one-touch controls to fly Willow through a landscape of angry clouds while collecting rainbow-colored bubbles and stars — the more bubbles you catch, the longer you remain airborne, and the higher your score. The game ranks pretty high on the hipness scale, not just because of the beautiful design and intuitive controls, but because Whale Trail comes with a theme song by Gruff Rhys of Super Furry Animals. Bonus: in the Whale Trail music video, Rhys wears a yellow raincoat and rides through the clouds on a motorized old people scooter. Beauty. 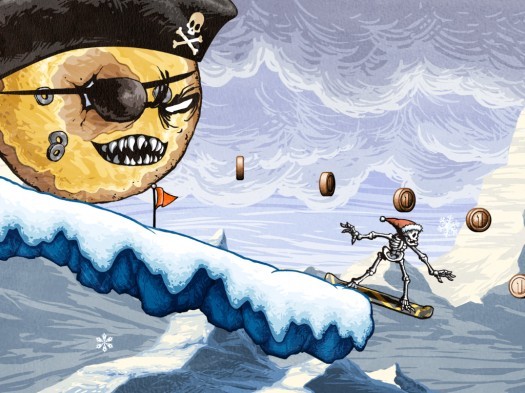 Why yes, that is a giant pizza bagel wearing an eyepatch skiing down an icy slope. via examiner.com

Have you ever wanted to be a gigantic, angry pizza capable of crushing every robot, skull, and skeleton in your path? No? Okay. Granted, it’s not an obvious dream like “make out with Ellen Page,” but once you start rolling your massive, customizable, doughy body over all things living and undead you might realize what you’ve been missing out on. The game by Riverman Media utilizes sensitive touch and tap controls to wheel your gigantic pizza avatar through graveyards, space, and the ocean. While the game can be effectively summed up by its simple title, the levels never lack in variety — each has an entirely different objective, from rolling down a rollercoaster-like ramp to tromping through a graveyard. You can also adorn your pizza with a variety of unlock-able customizations like lovely mustaches, cowboy hats and various gourmet toppings and doughs. While it may not compare to making out with Ellen Page, it’s pretty damn great anyway. 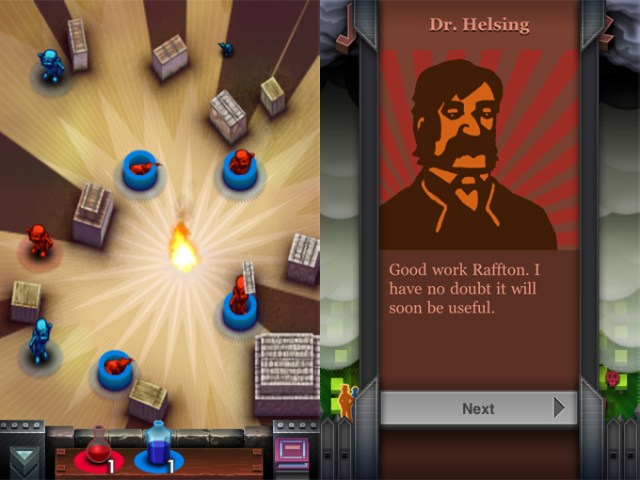 Love that 'stache. via gizmodo.com

In this “Dracula”-themed game by Clickgamer you fist-bump, vaporize vampires and drink celebratory tea while listening to soothing moog and organ synth music reminiscent of the soundtrack of Napoleon Dynamite. Are you still with me? Yeah, while mixing gothic literary allusions with fist-bumping and fascinatingly retro music seems a little odd, it fits together in Helsing’s Fire. You wander about increasingly puzzling rat-, vampire- and werewolf-infested rooms in a gigantic mansion sending various monsters back-from-whence-they-came with the aid of your torch and colored tonics. My favorite part about this game is the bold cut-out, mustachioed illustrations of Helsing and his buddy Rifton doing celebratory handshakes at the end of every level. 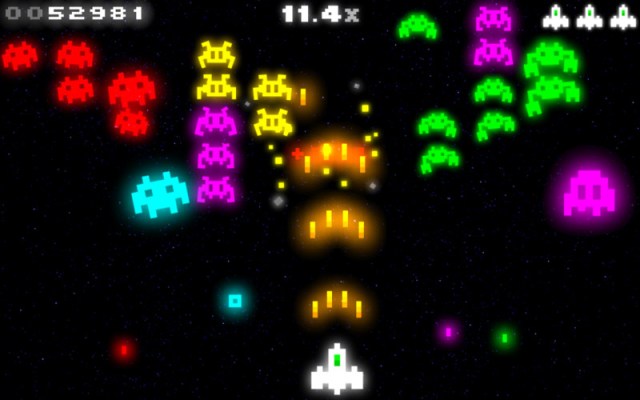 Remember Space Invaders? This is just like that except for the tongue-in-cheek B-movie  dialogue (and sometimes smack-talk) that happens between you (the alien-blasting space pilot) and the evil alien invaders. What sets this game by Hexage apart are the beautifully rendered neon retro-esque visuals and the atmospheric, electronic music. You blast through blocky, pixely alien hoards that look like they came straight out of your Atari, except that the aliens have suddenly moved into a nightclub and swallowed glowsticks, pulsating and shimmering fluorescently in the outer space sky. The storyline reads like it came out of a not-so-great alien movie (complete with time-traveling action!) but the writers of Radiant‘s dialogue seem to be aware of it and play with the tropes lightheartedly. The main pull is the simple controls and sleek visuals, which create an addictive, nostalgic, alien-shooting experience.

What kinds of mobile games have you been playing? Any great / odd / quirky games to add to the list?