Secretly, every parent or guardian fears that they’re somehow dooming their child to a life that’s less than that of their peers simply by virtue of being the parent they are. Are we ruining our kids’ futures by being working moms?By openly enjoying Dancing with the Stars? By playing Robyn around the house instead of exposing them to opera and classical music?

Gay parents are especially encouraged in this process, as there’s an extremely vocal contingent of people who believe that we ARE ruining our children just because of who we are as people, and some of them are even “experts!” 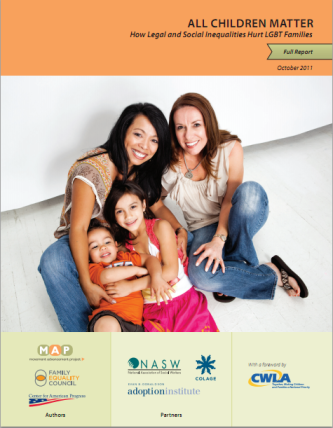 Enter “All Children Matter: How Legal and Social Inequalities Hurt LGBT Families,” a new report authored by several groups including the Center for American Progress and The Family Equality Council. It notably also includes groups concerned solely with the wellbeing of children and not with the “gay agenda,” like the National Association of Social Workers. The full report was presented in Washington DC yesterday, October 25; what impact it will have is only starting to emerge.

First of all, there’s headlines like “Children of gay families more likely to be poor,” which seems like a sweeping and potentially harmful statement to throw around. The facts are there — it notes that since gay parents aren’t always able to establish legal ties to their own children, issues like inheritance are never a sure thing. It’s much harder to pass wealth and property through a family that isn’t legally recognized as one, which is of course part of DOMA’s continuing footprint in our lives.

But it might be a little misleading; while DOMA is an issue that’s particular to the queer community, you could look at virtually every marginalized group in America and declare that their children are “more likely to be poor.” People of color have are statistically likely to have much lower incomes as well as lower levels of accumulated wealth. Americans whose ancestors were enslaved only a few generations ago aren’t going to have the same level of wealth accumulated, just sitting around to be passed on to their children, as a white family who’s owned land and property since the early 1800s. Studies also show that single women in the workforce are rarely able to set up retirement accounts for themselves, let alone trust funds for their children. If you’re part of a demographic, like black men or trans people, that suffers disproportionately sky-high unemployment rates because of systemic discrimination, then sometimes paying the bills can be a challenge, let alone amassing someone’s future inheritance.

Put simply, oppressed groups in a capitalist system will also be poorer groups when compared to their more privileged counterparts, and being born into a poorer family is always a statistical indicator of poverty later in life. Being born rich means you’re instantly equipped with the tools to stay rich: good schooling, usually a level of financial literacy, possibly social connections to other rich, educated people, and the safety net to try and fail as many times as you need to succeed. Children born into families with marginalized identities are often working without any of that, and it’s not because of who their parents are; it’s because of how America treats them. (Also, given the current state of the economy for young people, isn’t it sort of fair the majority of kids in America, regardless of their parents, are pretty likely to be poor right now?)

Which is really what this study is all about. When you look at the facts, it’s clear: It’s not us; it’s them. In its own words, “Many of the challenges LGBT families face stem from a society that assumes that everyone is heterosexual and comes from a family with two married heterosexual parents,” The study finds that children of LGBT families do in fact face serious challenges that children of straight couples don’t, but it’s not because children of gay families are inherently more likely to be anything; it’s because the country we live in is set up such that they have nowhere near equal footing.

Some of the report’s key findings:

+ The number of children with LGBT parents is significant: roughly two million children are being raised by LGBT parents.

+ LGBT families are more likely to be poor – twice as likely to live in poverty.

+ Laws and stigma hurt children of LGBT families — they’re less likely to have permanent homes, often don’t have legal ties to their own parents and lack protection in case of divorce or death, live in fear of a parent’s deportation, fall through safety nets designed for “families” because their own isn’t recognized as such, have unequal health insurance coverage, and face stigma and discrimination every day. 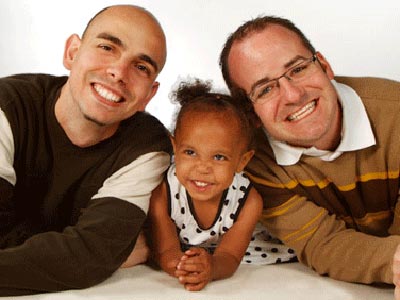 So, contrary to some popular beliefs, children of gay parents are: numerous, ethnically and culturally diverse, and perfectly capable of leading healthy and happy lives — if there weren’t powerful social structures totally out of their (or their parents’) control preventing them from doing so.

Obviously repealing DOMA would help, but that’s not the whole solution and besides, it’s unclear how far off that really is. The study’s ultimate recommendations are far-reaching, and they include goals like recognizing LGBT families and children in government safety net programs, expanding education and cultural competency around queer families, and enacting state anti-bullying laws as well as laws barring discrimination in the workplace, adoption, custody, health services, and housing. It seems like if DOMA could just be repealed — which seems likely to happen in the foreseeable future — these issues might somehow take care of themselves. But unfortunately, as Slate explains, the legal minefield for gay families is more complicated than most realize:

While most straight allies are probably aware of the economic inequalities same-sex partners face in many states and on the federal level in terms of taxation, inheritance and employer benefits (among many others), the discrimination faced by those couples’ children may come as a surprise. The report explains that many government “safety-net” programs rely on a limited definition of family that necessarily excludes the kids of same-sex parents. Furthermore, the law does not currently deal with custody issues in the case of separations, and medical visitation and decision-making rights are often not extended to both parents.

In a way, this report just says something we’ve known for a long time: that gay families have it tough, and kids with gay parents face a lot of things that their peers don’t. But it also confirms something we need to have repeated as often as possible: that isn’t our fault. Not that there wasn’t already, as the report explains, 30 years of research confirming that we’re competent, loving parents. But this time the message is loud and clear: not only are bigots wrong in their assumption that we’re bad for our own kids, but they’re in fact responsible for all the problems our kids face. The movement to ‘protect children’ and ‘the family’ from gays has, because it is totally misguided and wrongheaded, resulted in harm for kids whose parents are doing everything for them they can. 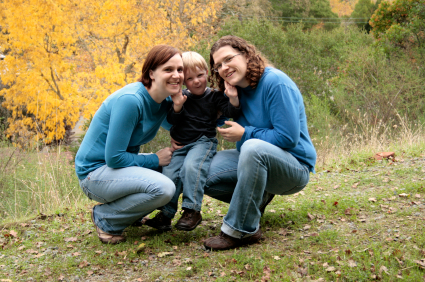 Depending on how seriously this study is taken (and probably in large part on how the political landscape of 2012 turns out), this could turn out to be a strong facet of the always-evolving gay rights movement. What if instead of trying to prove that we weren’t a danger to kids, we demanded that everyone who really cares about children started making the world better for them by helping their families stay safe? We may already be seeing it in action:

Bryan Samuels, commissioner of the federal Administration on Children, Youth and Families, is scheduled to be part of a panel discussion, and the opening speech will be given by Maryland Attorney General Douglas Gansler, a staunch gay-rights supporter in a state where lawmakers will be considering a bill to legalize same-sex marriage next year.

“Same-sex marriage is a pro-family measure,” Gansler said in a telephone interview.

Lisa Polyak, chair of the statewide gay-rights group Equality Maryland, says there will be a concerted effort during the legislative debate to highlight the challenges facing children of gays and lesbians.

“If you care about children, you should care that the parents don’t have the legal tools to take the best care of them,” she said.

Shaming marginalized groups by calling their parenting skills and families into question is an old tactic, and when we’re steeped in a culture that encourages self-loathing and second-guessing, it hits even harder. But this report shows that when you look at the facts, they’re pretty clear: the ones really hurting children are the people trying to undermine the families that love them.