Leah Horlick has been on Autostraddle’s radar lately. Initially, Riese and Carolyn mentioned one of her readings in Lez Liberty Lit #3; then, Carmen reviewed the first issue of Plentitude Magazine and called “Fault Lines,” a poem by Horlick, “one of her favorites.” While working on my forthcoming review of Poetry is Dead, a magazine that also features Horlick’s work, we realized that  she wasn’t just making the rounds on Autostraddle, but the queer lit world as well. Three mentions felt like a charm. It was time to match a face with the wonderful words on the page. 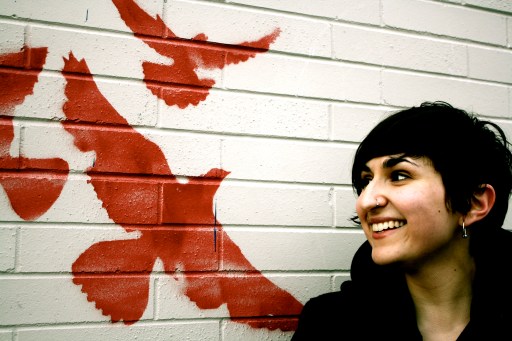 A seasoned poet hailing from Saskatoon, Saskatchewan, Horlick is a 2012 Lambda Literary Fellow and a Short Grain Award winner.  A University of British Columbia grad student, Horlick’s first book of poetry, Riot Lung, will debut this fall and can be pre-ordered through Thistledown Press:

Leah Horlick’s poems vibrate with spontaneity and yet retain an intimacy that is emotionally intoxicating. Whether reflecting on her coming of age moments within her family, or measuring the impact of both the rural and urban prairie landscapes on her life, she never strays far from her spoken word roots or her feminist politics.

The title poem, “Riot Lung” is an anarchist’s love letter. Set in post-9/11 New York, Horlick’s outsiderness is evident as she navigates the city of perpetually checked bags and the world’s most famous police department. The poem features such gems as “when you call me, i’m the girl on the sidewalk with a loud voice and a cellphone in her hand like a heart, or a seashell” and “a country where I get through through customs with a smile on my face and a four-chambered hand grenade in my ribcage.” You can watch Horlick read “Riot Lung” here:

I had the privilege of attending one of Horlick’s readings this summer. Afterwards, a fellow writer asked Horlick if she’d swallowed a bird before her performance. That a pretty strong indicator of how great she is behind the mic. To keep up with Horlick’s performance dates and news of her book release, you can follow her on WordPress and twitter.