MTV’s show Faking It, about two high school best friends, Amy and Karma, who pretend to be lesbians in order to gain popularity, only to have one realize that she’s queer for real, is putting out a call for new actors. They’re not just looking for any for any actors though; they’re looking for trans and gender non-conforming actors to play both background characters and speaking roles in the show’s upcoming third season.

In a video released on Friday, the show’s stars — Rita Volk (Amy) and Katie Stevens (Karma) —join showrunner Carter Covington to announce an open casting call for trans actors. “Our show is all about inclusion,” Covington starts off. Volk adds, “We have characters who are lesbian, gay, bisexual, questioning…” with Stevens finishing off: “And intersex, don’t forget Lauren.” They continue to say that this season they want to expand that inclusion to trans and gender non-conforming actors on camera both in speaking roles and in background.

If you’re a trans actor over the age of 18, but you look like you could be a high school student, they want you to make a one minute or less audition tape where you tell a story about your best friend, whether it’s funny, scary, heartwarming or something else and submit it to the casting website. Both new and experienced actors are welcome. The deadline for submitting your video is November 13.

Faking It already has more of LGBTQI characters than your average TV show. Amy is definitely attracted to women, but she might also be attracted to some men; Karma is attracted to men, but she’s also got feelings for Amy; Amy’s step sister Lauren is probably the first example of positive intersex representation on TV since Freaks and Geeks; Shane is gay; Reagan is a lesbian; Wade is bisexual and a few other lesbian and gay characters have been on the show. Even Laverne Cox showed up for an episode, to play the school’s drama teacher. 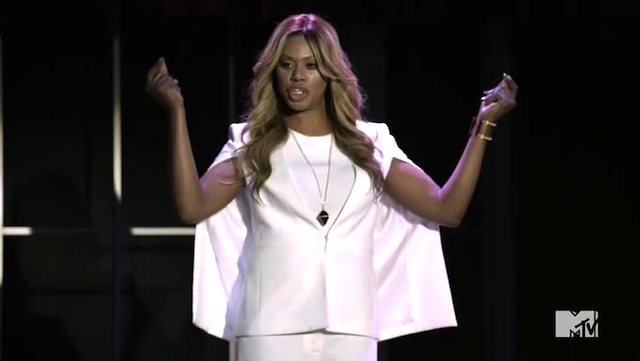 Laverne Cox on Faking It

I’ve been desperately hoping for another chance for positive teenage trans representation on a TV show after the disaster that was Glee’s abuse of Unique. I’ve also even hoped that this specific show would include a trans character, guessing that maybe Lauren was trans before she came out as intersex. However, this show has often done a really terrible job of representing lesbian, questioning and bisexual characters (just read Riese’s wonderful recaps to see how), especially this season, and oddly seems to be about a school that is incredibly liberal and open-minded, yet only contains one confirmed not-straight female student (Amy).

But it has done a really great job with Lauren’s intersex identity, even working with the intersex youth advocacy group Inter/Act, to make sure that they do right by the intersex community. Hopefully some of these actors will see their speaking roles expanded to recurring roles on this show and to more roles down the road in other projects. Ideally, next season will do better by all its LGBTQI characters.

The Faking It season two finale airs this upcoming Monday on MTV.