Back at Sporkle, Liam’s Dad is trying to convince everybody that he’s fine, despite the fact that he’s totally not fine. On a scale of one to ten, Liam’s Dad cannot get out of his chair. 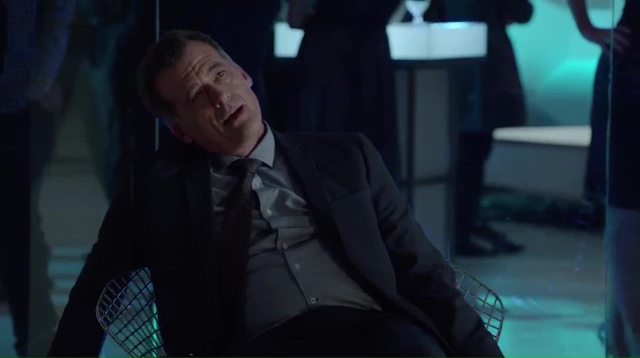 Liam’s like hey Dad, this is super-neat super-fun time, but it’s time to cut the crap and get your shit together so we can do this big presentation. 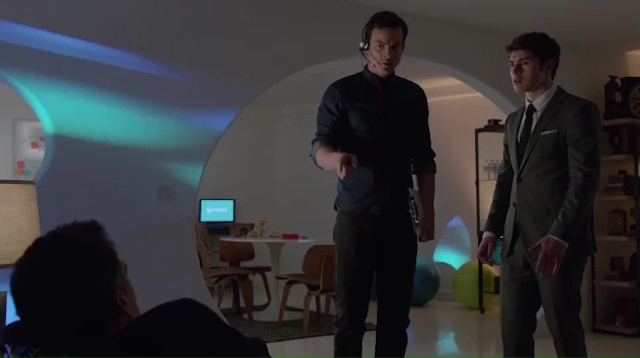 Is that bib necessary?

“You got it! be right there,” Liam’s Dad says before collapsing like a secondary cast member of The Real L Word. And no sooner has Liam noted that the only thing he saw his Dad drink was a glass of water than he spots Karma across the room, pouring more water and mouthing “I’m sorry.” This is proof they have a special connection because how on earth does he know what she’s apologizing for? 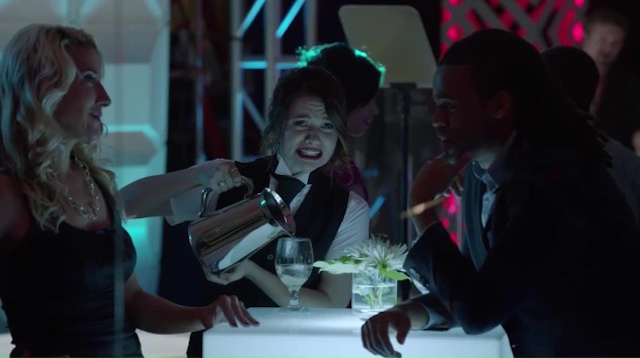 I only date girls now, sorry!

Regardless, apparently nobody else works at Squirrel-kle besides Liam so he’s gotta give the big presentation! It’ll be okay, he’s just gotta read the teleprompter, but he can’t even do that very good so he loses his place and starts riffing! Liam admits at first he thought Spoogle Glass Cyborg Glasses were a dumb idea but who hasn’t dreamed of having a computer on his face? 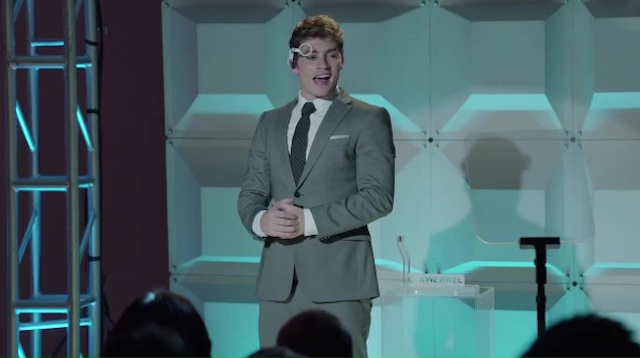 So, if a tree falls on a woman and there’s nobody there to catch it… 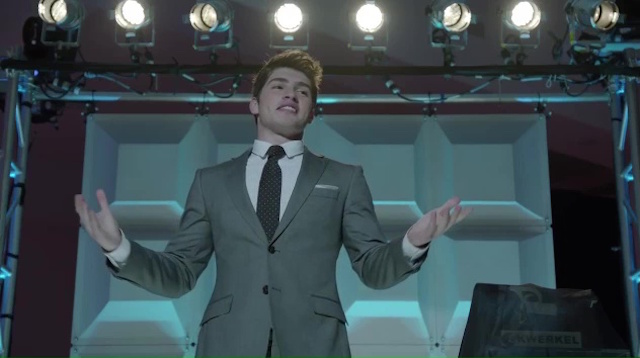 THEN WHAT WAS A TREE DOING IN THE KITCHEN??? 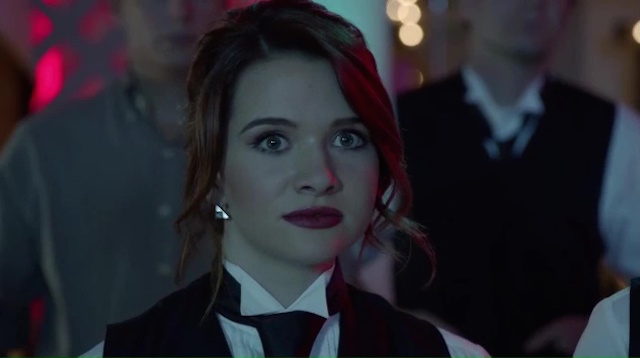 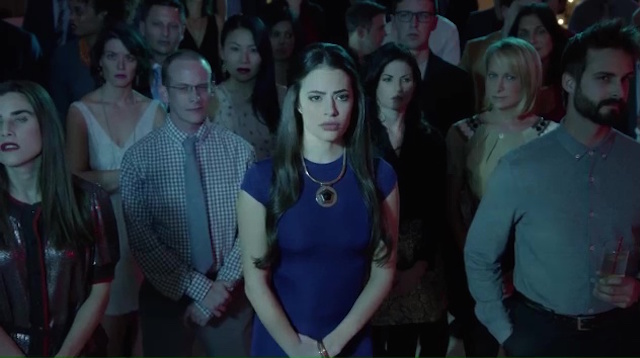 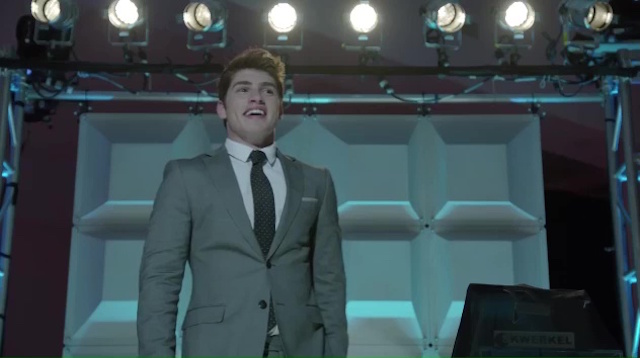 Reagan: Charlotte really played with my head, she used me as a test to prove whether or not she was actually a lesbian and guess what the results are?
Karma: Reagan, that sucks, I’m so sorry.
Reagan: It’s okay, I’ve learned from my mistakes and now I have an awesome girlfriend who’s got it all figured out!

Ah yes, if there’s anything I love more than sticking my face in a giant-sized bowl of Fruity Pebbles, it’s the trope that questioning women are deceptive and confused and that lesbians are biphobic, clingy, easily made jealous and close-minded. Plus, slipping roofies in somebody’s drink is straight-up illegal and monumentally fucked up, so this episode is really doing an all-around bang-up job with the only out lesbian character on this show (and a lesbian of color, at that.) 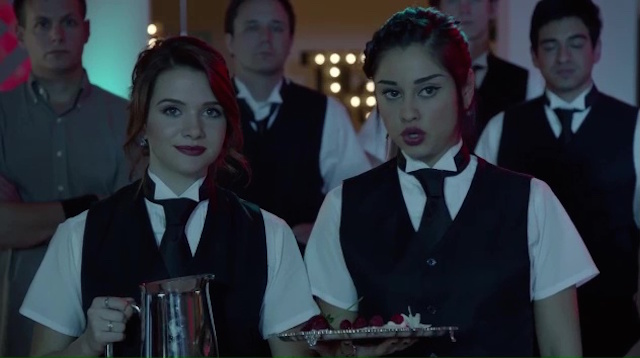 It all just feels so… contrived?

Back at Baldwin, Theo is introduced as “Jimmy,” which is like, basically the Narc-iest name of all time, and Lauren grabs the mike, as planned, to tell everybody that there’s something they don’t know about him! Yup! 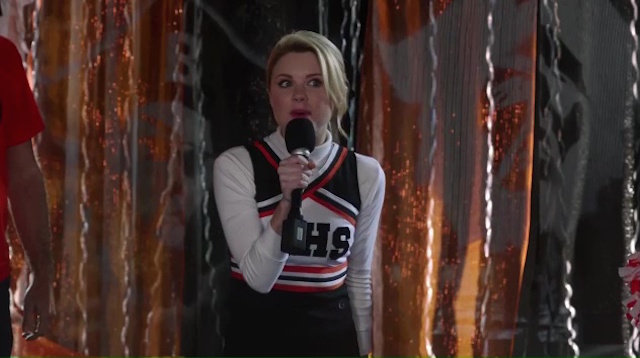 You think Jimmy’s such a good basketballer, dontcha? Well, let me tell you a little something about a substance known as “flubber.”

“Lauren, please,” says Theo, I MEAN JIMMY. Lauren hesitates as her little heart swims to the surface of her skin, reminding her that her cold, mean exterior is just that — an exterior. Unfortunately, she’s already gotten her friends involved and so Amy inexplicably picks up where Lauren left off, with Shane there for support. 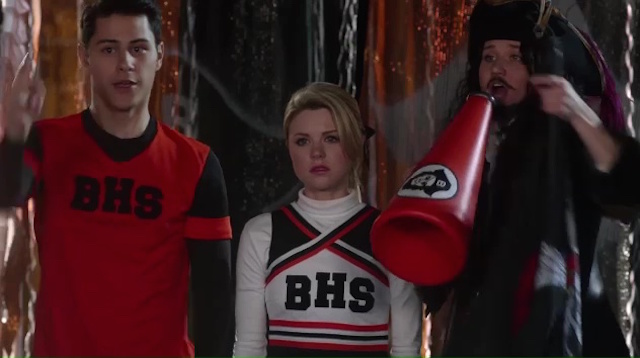 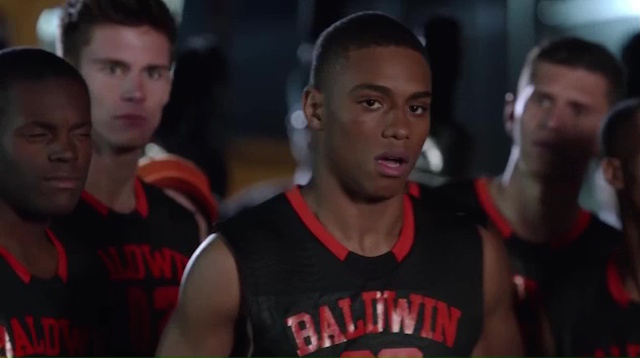 Well, there goes my job at Crabtree & Evelyn

And when it’s all said and done, nobody feels better about anything.

When you got out of bed this morning I hope you thought to yourself, “You know what this show needs? Less homosexual love scenes and more heterosexual love scenes.” GOOD NEWS YOU GOT YOUR WISH! So, it turns out that Liam didn’t tell Karma the truth about “giving up art.” ’cause he wants to “earn her forgiveness, not buy it.” But uh, he sort of earned it by buying it? Anyhow. 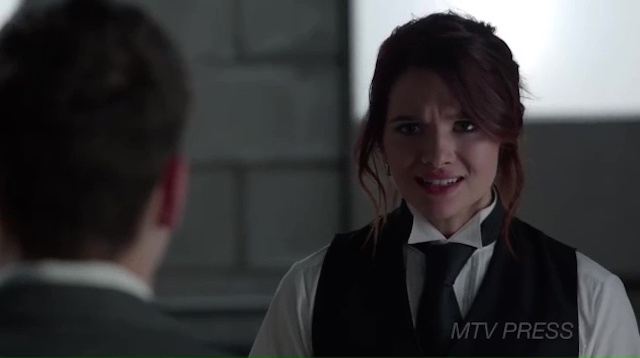 Why did you put that note in my locker about wanting to see me in a suit and tie if you didn’t mean it? 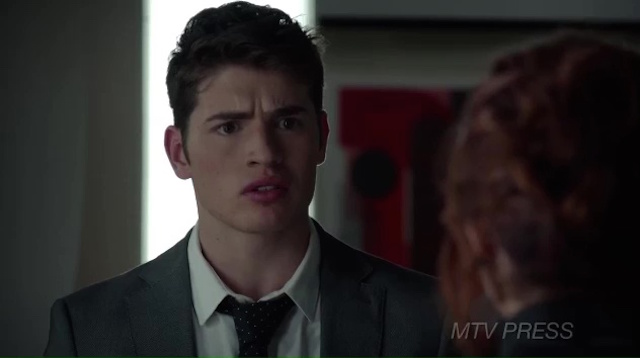 I didn’t put any notes in your locker. 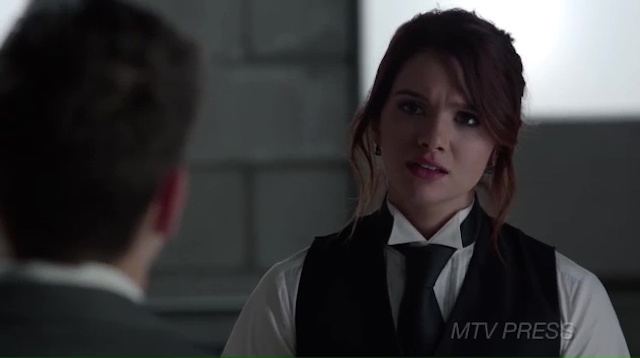 Karma says she’s scared of being hurt again so this can only work if she’s in control. Basically she read 50 Shades of Grey and is listening really hard to her Inner Goddess and biting her lip a lot. She commands Liam to put his hands behind his back, so she can tie him up and thrust him onto the desk for some heavy petting. I always knew Karma was a top! 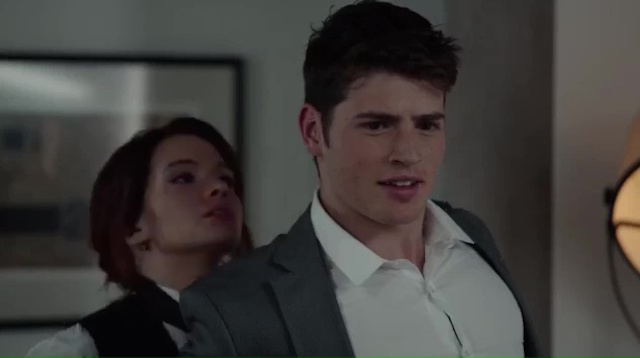 Back at Chez Fawcett, the three Revengers are sharing ice cream, just like Amy wishes everybody was always doing all the time. Also, Amy’s moustache won’t come off, and Lauren says that outing Theo didn’t make her feel any better. 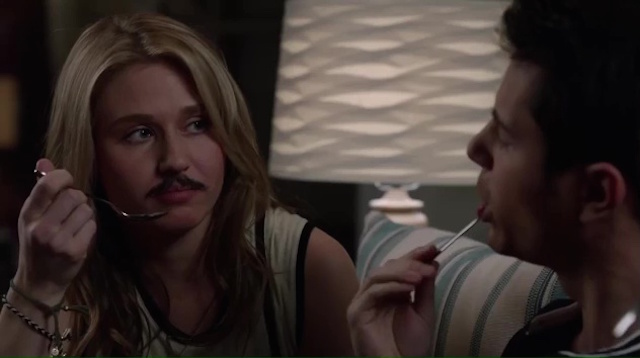 Amy says that she’s gonna tell Reagan how she really feels and if she wants a real relationship she really has to be honest about who she is. 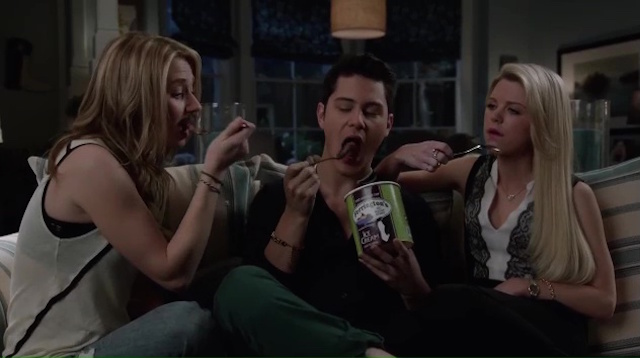 After the little chow-down, Amy heads upstairs to find Karma sitting in her room, wanting to be sure Amy knows that Reagan’s last girlfriend dumped her for a boy. I love how all Amy’s friends have Spidey-powers and can scale walls to get into her room. 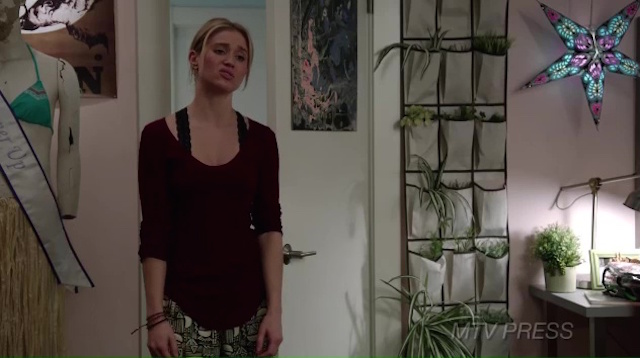 Really? Dry-humping AGAIN? I thought we were gonna try something new! 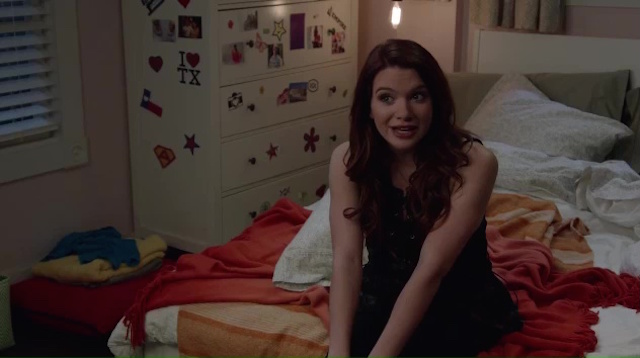 I’ll take my shirt off this time! 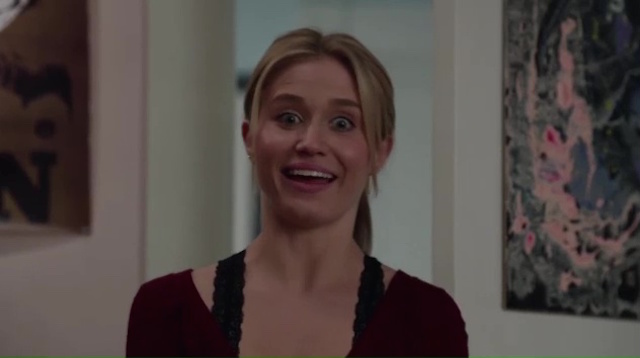 Karma: Did you know that her last girlfriend dumped her for a boy and now she has zero tolerance for girls who are still questioning her sexuality?
Amy: Oh, that!
Karma: She thinks you have it all figured out. Amy, you have to tell her the truth.
Amy: I know but how do I even begin? Oh, by the way I’m sometimes attracted to guys and oh by the way I once slept with Liam.

Obviously Reagan is lurking outside Amy’s room listening to the conversation, because tropes. 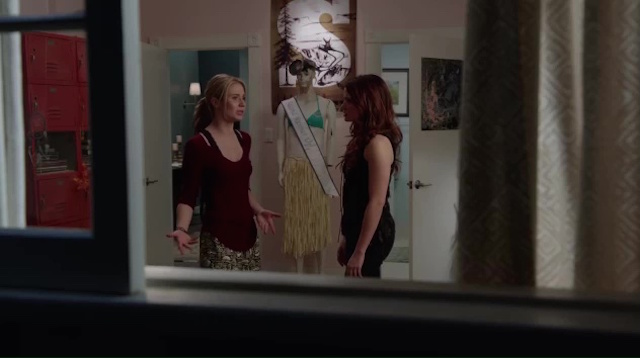 Okay, sure, yes, I don’t watch the show, I only read the recaps. But Reagan would be so hurt if she knew! 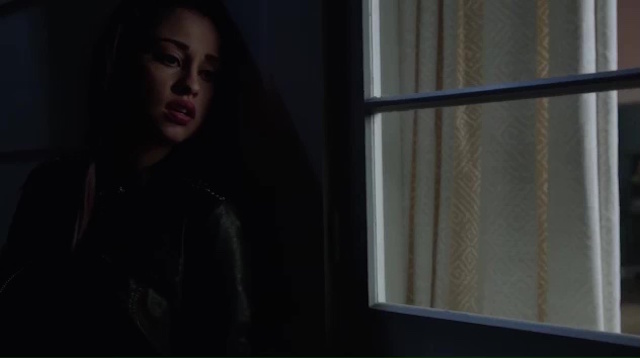 This explains so much

Okay look this annoys me on a very basic elemental level of how logic and arguments and ideas work. This is apples and oranges. Charlotte didn’t know if she liked girls or not, but she had a girlfriend anyway, and then left Reagan for a boy. Amy is sure that she likes girls, and therefore has a girlfriend. She might still be attracted to guys, but if she were to leave Reagan for a guy, it wouldn’t be ’cause it turns out she never liked girls at all! It’d be because she doesn’t want me to recap this show anymore. JUST KIDDING BUT REALLY. Also, this is the blue liberal heart in the deep gut of red Texas, right? So it’s not like a small town in the Bible Belt where Amy would have to give up her job and friends and family and church to be with Reagan and might do her best to turn off those feelings and re-direct them towards a man if there was any possible way to do so. It feels like everybody except Amy wants this to be a much bigger deal than it is. Plus, like I’ve said a million times — having drunken heartbreak sex with a person of a certain gender doesn’t have to mean anything about your attraction to people of that gender. Karma has shown more attraction to Amy than Amy ever has to any guy, and nobody’s pressuring her to re-assess her label! None of this adds up.

Honestly I’m struggling to say something coherent about this or make any kind of real declaration. I mean, right off the bat, I think y’all know that I personally really want Amy to remain a lesbian character and I feel like the “questioning” storyline has been done to death and it’s not as “edgy” as the producers seem to think it is. But that’s just my personal opinion. (I also have a bone to pick from a media representation angle, though, which you can read about here.)

On the story level, it’s just that this element of Amy’s character hasn’t been sold to us hard enough for me to really assess its importance. We keep hearing over and over what a huge deception this is and how Amy is “into guys” … but we’re being told, not shown. It feels like everybody this season needed a lie and so this became Amy’s. Karma’s lie is also pretty stupid. So was Liam’s. Shane’s really the only one with a legitimate secret this season.

So I don’t know how I feel. But I’m pretty sure you’re gonna tell me how you feel!

Next week on “Faking It”: