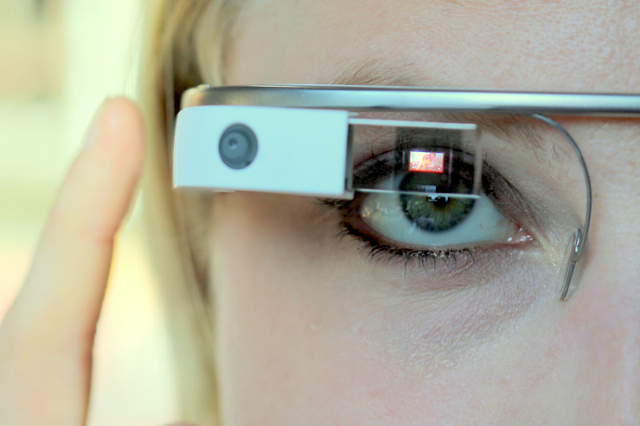 I am a pioneer (ahem, Explorer) tasked with testing the developer edition of Google Glass, arguably technology’s biggest quantum leap forward since the advent of the tablet. The start of Google’s epic annual conference this week will no doubt bring a critical mass of Glass-wearers into San Francisco, making its social implications more relevant than ever — especially come happy hour.

But since hardware benchmarks, unboxings and rigorous teardowns are so 2012, I to set out to review Google Glass with one noble (if amorous) goal. I wanted to wear the device on a full-fledged, real-life, real-stakes date and see what happened. Just for the hell of it. 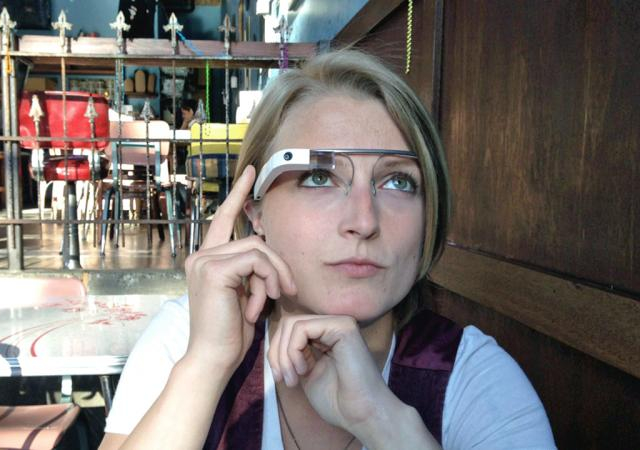 Glasshole in the wild

Sure, a romantic evening on the town wearing a Star Trek-remixed smartphone on your face might ward off your average weirdo, but I like to live well beyond the doldrums of social custom. Which is to say that my editors suggested the idea and I blame them for everything. They may have been joking – I’m not actually sure. Everything began innocently enough on our weekly over-caffeinated Skype call. The rest is history, especially the bivalves.

This is how it goes: I propose that a cute girl of interest (her name is Rebecca) accompany me to dinner and drinks… and mention my one wearable, Bluetooth-enabled caveat. As it turns out, she’s game for the experiment, curious about Google Glass and accepts my invite. Cue nerd panic.

Glasshole On The Half-Shell

My frantic pre-date self pep-talk logic goes like this: 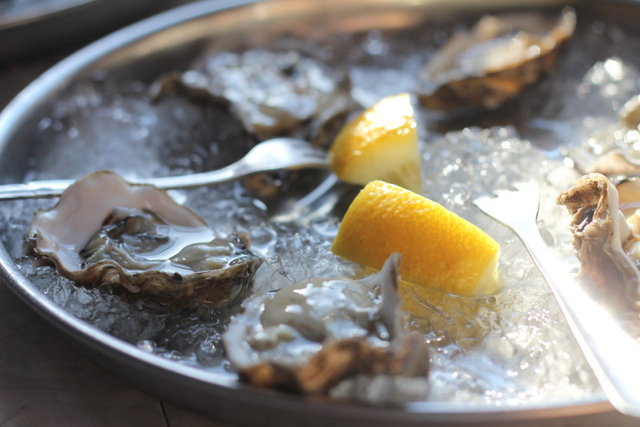 Don’t act like you haven’t read Tipping The Velvet

A Date With A Glasshole, Documented In Realtime

For dinner, we agreed on an authentic cajun place/oyster bar in North Portland with stiff drinks and plenty of exits. 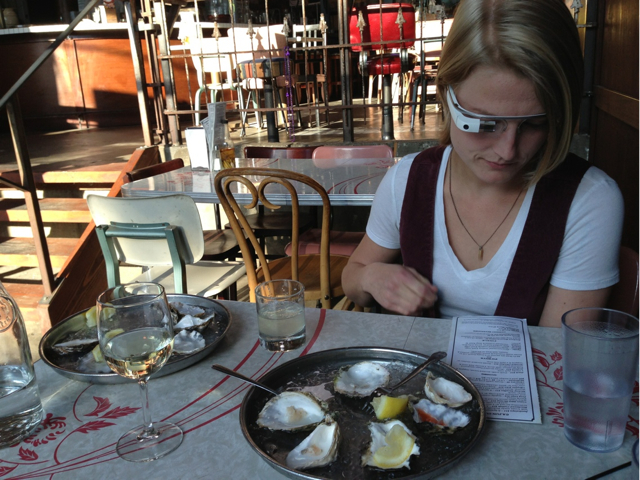 Taylor: Do you generally like technology? How do you use your mobile devices?

Rebecca: Sure, I like technology. That said, I’m not crazy in love with it. I do use my iPhone 5 almost constantly. I listen to podcasts and stream music all day at work. I text up a storm every 15 minutes… at least. I check my email, Instagram and Facebook every hour or so.

T: What’s the first you heard about this whole Google Glass thing?
R: I first heard about it about five months ago. I thought it would be a great for people who need to be available all of the time for work. But I knew it [wasn’t] for me.

T: So what do you do for work?
R: I am a vintage dealer and leather craftsman.
T: That’s pretty old school. You make like… non-virtual 3D objects? Whoa. 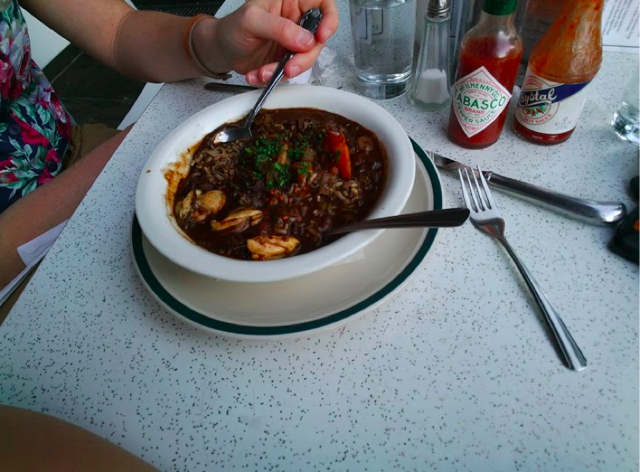 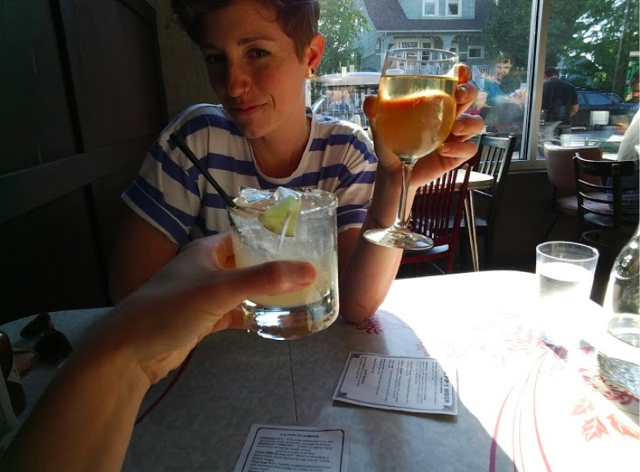 I swear the thing on my face ordered the third margarita

A day after the date, I check in to see how she thinks things went. You know, for the story. At some point she called Glass a “breakup-inducing cyborg face device,” so I was a little nervous about this part, I admit.

T: So, like, why did you agree to do that? Was it weird?
R: It was kind of weird. But the face that Glass was attached to is so damn charming. And it was promising oysters and tequila. Who could resist?

T: Fair enough. Flattery will get you everywhere.
R: I was also curious to see the general public’s first reaction to it. People looked for any excuse to come up and talk to you about it. It was the first thing our server asked us, remember? “I’ve gotta ask: What’s up with that glass visor thing?” Everyone sitting near us was staring. You might as well have been wearing a huge squirrel costume.
T: Next time I will wear my huge squirrel costume. That’s more of a date 2.0 thing, I think.

T: Squirrels aside, do you think there are rules around technology and date etiquette?
R: There are most definitely unspoken rules around dating and phones. And, yes, I tend to obliviously violate them.
T: Okay so maybe I got mad at you for texting back and forth with a friend while we waited for our entree. Was that hypocritical?
R: Well, yeah… at least a little. You were also on your Android phone too. We were both on our phones on that date – not just on Glass. I have pictures to prove it.
T: Oh. Er… my bad. 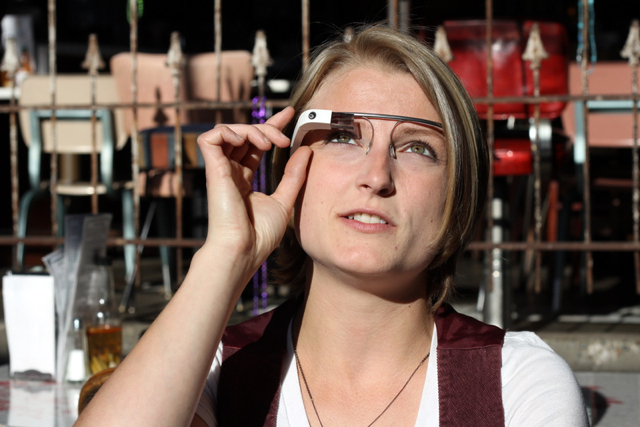 R: There are rules. No phones on fancy date night. It’s a time to connect with a person that’s important to you.

T: Oh, so you’re saying that I’m important to you? The truth comes out! Maybe this was all a ruse to get you to say that you liked me?
R: [Possibly creeped-out silence]

T: So, uh, let’s get down to brass tacks. Do you think Google Glass is going to turn us all into zombie cyborgs who don’t care about other humans? There are apps for virtual kissing, you know.
R: I think Google Glass is going to turn the people who are already predisposed to being zombie cyborgs into zombie cyborgs. I think it’s easy to own and use Glass with respect and class to the people around you. It really depends on the person wearing them.

T: What about how I used Glass during our date? Was it distracting or rude?
R: I thought you were super classy. You only talked to it (to send texts) when you needed to. And I love that you could take candid pictures of our experience, that part was great. But in the back of my mind I worried I didn’t have your full attention.
T: You did… I swear!
R: But the fact of the matter is there was a thing on your face that also had that attention. I had trouble seeing my way around it, literally. A phone in a bag wouldn’t get checked [until] the date is over. Not that mine was in a bag…

T: How much did you enjoy our landmark social experiment on a scale of 1 (total catastrophe) to 10 (impromptu marriage in Vegas)?

R: I’d give the outing a 7. I definitely wouldn’t want you to wear it to my birthday dinner or anything. But it was a fun to see other people react to a thing that they really didn’t understand… especially during Happy Hour.

T: So how did you think the end of the date went? Did Glass affect that?
R: You mean when I gently lifted Glass from your face and with one careful motion and slid it into its specialty Japanese microfiber case with a hardshell bottom?
T: You had me at “microfiber.”

T: So, um, do you want to get drinks this weekend?
R: I would love to go on another date with you. But will Glass be coming?

Back To The Future

As for delicate, at-times technophobic Portland, I may have unraveled its gossamer social fabric in ways irrevocable. After drawing a lot of stares, I’m a little embarrassed to go back to the same oyster place in my North Portland neighborhood. (Which sucks, because they have a kick-ass special on Tuesdays.)

Still, my date — who I have taken quite a shine to — is game for further interactions in the three-dimensional world. (And I mean, how cute is it that she put up with all of this experiential tech-journo bullshit to begin with?)

I have to admit: The world beyond Glass does have its perks.

Confused about this whole Google Glass thing? Google’s official video is a pretty accurate depiction of the device:

[All photos by Rebecca Barron, who is a very good sport, and Taylor Hatmaker]

This story was originally published on ReadWrite, a place for news and analysis on all things web, tech and social media — and coincidentally a place where Taylor also writes things.

Want to see more good stuff from ReadWrite? Check it: