Earlier today, my friend Batia introduced me to the taco box.

Me: Maybe someone someday will love me enough to make me a taco box.
Batia: My future is me making myself a taco box. Is this liberation?

This is a taco box you guys: 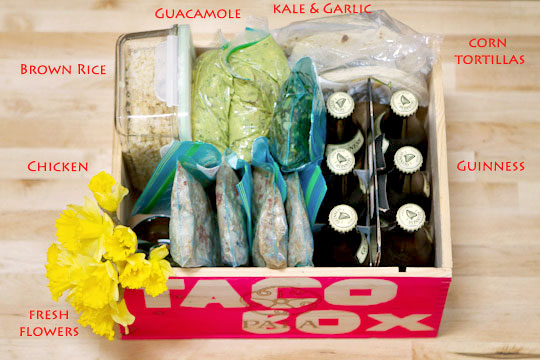 Do you get it? It’s everything you need for tacos. In a box. Also flowers. And beer. Guinness wouldn’t be my choice, but let’s not nitpick. There’s also some kale, which is an excellent decision. Also I have the exact same tupperware that the brown rice comes in. I’m hard pressed to think of anything I really, truly need in life that is not found in the taco box.

In the original post on The Kitchn, the taco box is presented as a gift for new parents, so that they don’t have to fit taco-making into their infant-centric schedule. It’s in the same vein as dropping off lasagna or casseroles for stressed or put-upon friends. I’m hoping I don’t have to have a kid to merit a taco box, though. I think there are many occasions in life that are well suited to being commemorated with a taco box. For instance:

What are you waiting for? This is a cold, cruel world, and needs more taco boxes in it. Be the taco box you want to see in the world.