Fred Rogers began working in television because he “hated it so.” He believed that children deserved respect and that tv shows could do a better job of giving it to them. He became the change he wanted to see in this world, is what I’m saying. Today is Fred Rogers’ birthday, along with Won’t You Be My Neighbor Day, and those are both excellent excuses to talk about our Mister Rogers’ Neighborhood-related feelings, of which I have a blue million. 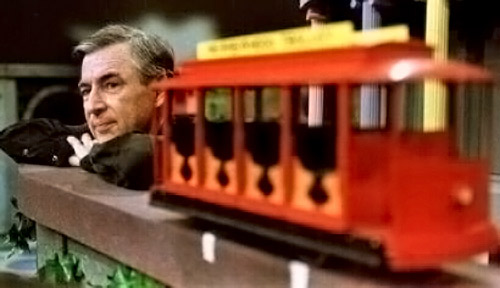 I can barely even think about Mister Rogers without being on the verge of tears, which is ridiculous and embarrassing, to be totally honest. I mean the crying is embarrassing, not how much I love Mister Rogers. I’ve never been embarrassed about that. My family always appreciated creativity and uniqueness (we were all such special snowflakes back then), but I must’ve taken that for granted because when Mister Rogers told me I was special just the way I was, it resonated in a different way. You just knew that everything he told you was true, and kids appreciate straightforward honesty.  So when he said he liked me for me, and that it was ok to have feelings and that he’d be back when the day was new, I believed him. And even though I wasn’t scared of being sucked down the bath drain, Mister Rogers showed me that some kids were. That was probably the most invaluable lesson I learned from him: really respectful empathy.

So in honor of his birth (and Daniel Lion, just in general), here are my number one feelings and favorite things about Fred Rogers on this snappy new day! 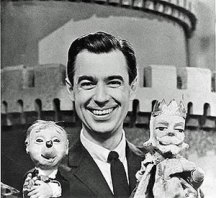 1. Fun Fact: The very first version of Mister Rogers’ Neighborhood was a 15-minute show called Misterogers that aired on Canadian television beginning in 1963. In 1966, Fred Rogers bought the rights to his show and brought it to the US, proving yet again that damn near everything that’s good and decent in this world probably had something to do with Canada. (see also: SCTV)

3. Fred Rogers had really progressive parents. They respected him as a whole person when he was young, and he was encouraged to talk about his feelings. So much respect and feelings and love in that house.

“When I was a boy and I would see scary things in the news, my mother would say to me, “Look for the helpers. You will always find people who are helping.”

4. He was really into honesty. I love honesty! Write this down and read it all the time:

“The greatest gift you ever give is your honest self.”

5. Speaking to the US Senate in support of government funding for public television.
This just never ever gets old. Ever.

6. Mister Rogers was so proud of you. All the time.

“I hope you’re proud of yourself for the times you’ve said “yes,” when all it meant was extra work for you and was seemingly helpful only to someone else.”

“I’m proud of you for the times you came in second, or third, or fourth, but what you did was the best you have ever done.”

7. Two words: Picture Picture
Please observe the mandatory viewing of the Picture Picture tour of a crayon factory aka The Best Factory Tour Ever and the beginning of my obsession with shows like How It’s Made. (Again, thank you Canada.)

You can purchase so many seasons of Mister Rogers’ Neighborhood on Amazon Instant Video! Or watch complete episodes on PBS Kids, including “Mister Rogers Talks About Competition,” in which Big Bird himself visits the neighborhood of Make Believe.

Did you want to visit Lady Elaine’s Museum-Go-Round? Was your favorite part when Mister Rogers would do crafts in his kitchen or when he fed his goldfish? I think you should share all of your feelings in the comments!