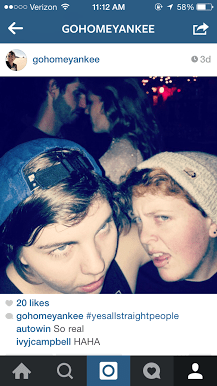 relevant image from our trip to The Lex last weekend

A few weeks ago, we all had a nice time reading excerpts from 1-star Yelp reviews of lesbian bars from actual queer women. But lesbians aren’t the only humans with feelings about their lesbian bars — there are some straights and gay men with a few choice words to share as well. (This list could’ve easily been 26 accusations of “hypocritical” stances on equality or reminders that “discrimination goes both ways” from people horrified that there might ever be a space that doesn’t immediately prioritize their needs.) Everybody has mixed feelings about mixed crowds at lesbian bars, and the reviews are mixed, too — for every straight and/or male hater, there’s another who loves the place despite not being its target audience! Every night, in some lesbian bar somewhere around the world, a straight woman or a man is having a really nice time with his gay lady pals. It’s true! But there are also some straight women and men who can’t handle the adventure and instead wrote these reviews on Yelp. (Also, #23 isn’t actually a negative review, I just thought it was funny.)

If you think lesbians hate lesbian bars, just listen to these folks!

Everything below has been ripped mercilessly out of context.

2. “To The Drew Carey lookalike Lesbian bouncer: be nice to people, especially to customers. You never know who will write a review and call you out on your rudeness. Oh and for your own health reasons: lose some weight or adjust your attitude. Nobody likes a Mean Fat Person. You can’t be both!”

4. “When my friend used the men’s restroom he discovered that someone had written above the urinal “you are not welcome here.” Really?”

5. “I intentionally let some stranger beat me at pool because 1. this girl was sporting a mullet and 2. I think she was carrying a knife.”

7. “Well, after building this place up in my mind for years and begging countless females to let me tag along, last Friday I finally got to experience [bar]. It was so anti-climatic to realize it is just a neighborhood bar that happens to be very woman-identified.”

8. “I have a feeling as to why we were rushed out: we weren’t lesbians.”

9. “Can you imagine what kind of uproar these women would have caused if the roles were reversed and they were refused entrance into a straight business?  LOL!  They’d probably call all the local news stations!”

10. “The door dyke was SO rude and sour that I’m a little scurred of her — even though I’m over 6′ and she’s probably a foot shorter.”

11. “Most of the “ladies ” here are haters. So much for a supportive, all-inclusive gay community. Perhaps they were jealous because I have fuller facial hair.”

12. “No matter how much you tip or compliment the bartenders, you cannot get them to crack a smile. You may, however, see their crack as their Dickies sag or when they bend over to grab a beer.”

13. “The place is so dingy, grimy, and gross that I seriously believe monsters are going to come flying out of the bathroom at any moment and swoop down on all the dudes and chop our heads off.”

14. “I had met the owner a dozen times but either she never remembered my name or pretended not to. This was obviously because I was a guy.”

16. “I tried making conversations with a couple chicks there with no intentions but a friendly gesture and I would literally get quick, sharp answers. I’m sorry, I was interested in how adorable your pug was, not you. I’m straight.”

17. “Talking with my female friends, their guess is that the owner is a manhater.”

18. “I’m reviewing [bar] solely as a neighbor sick of the asinine wasted jackasses that roll out of here at all hours. I’m talking each and every night, around 2 am, girls AND guys are yelling in the streets, usually fighting with each other, trees, street poles, god knows what.”

20. “She had no cause to be rude to me, unless she’s male-o-phobic or something.”

22. “Some girl with a fake purse tried to tell my friend that she had a mullet, when it was clearly layered fringe.”

23. “even tho I am a dong pirate, I like [bar]. The crowd is fun and rad, the bartenderwomen are hot so if i was going to go the other way id probably go for one of them.”

24. “You preach equality, yet if you are a newcomer (and straight, accompanied by your boyfriend) to [bar], you will not even be served a drink within 30 minutes (at least). I was excited to be in an establishment that would respect the fact that everyone lives differently, and these differences should be embraced. Unfortunately, because I am heterosexual, I’m not to be treated equally… Needless to say, we left after we were not treated EQUALLY!”

25. “Guys definitely beware, they have absolutely no interest in having you there and definitely will make you feel unwelcome at any and every point.  On the other hand, If you’re a man hating lesbian that doesn’t mind overpriced drinks, this is the place for you.”