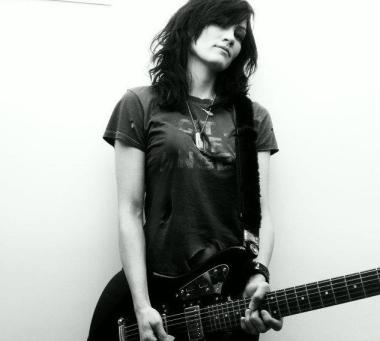 My introduction to musician slash reality television superstar Somer Bingham was in July 2011, when I received an email suggesting that I would really dig the band Clinical Trials. Somer and her music — which was described as “thrashy all-female electro grunge rock with a side of angst” — quickly became my new favorite things.

Almost one year later, the announcement was made that Somer had joined the cast of Autostraddle’s favorite lesbian reality television program, The Real L Word. Obviously I jumped at the opportunity to call her up and ask, “oh God, WHY?”

Here’s the thing: Somer gets it. Like, she’s in on the joke too, and anybody who follows her on twitter knows that from her self-deprecating episode live-tweeting and overall sense of humor about the whole project.

After dealing with a phone speaker blow-out (which, fyi, an empathetic Somer offered to help fix) and being read the world’s most polite riot act by Showtime PR, we settled in for a deep and meaningful discussion about music and TRLW that ended up getting totally de-railed.

What were you thinking when you signed on to do The Real L Word?

To be honest with you, I wasn’t all that interested on being on the show. In fact I had a couple of conversations with Vero (Hunter Valentine) when trying to decide what to do, I wasn’t really sure if I wanted to be on reality television or if I wanted to let people into my life. I’m a musician, not a TV person, and so I had a lot of hesitation.

Also I was in this in-between period with Hunter Valentine, we were still trying to figure things out and it wasn’t really my decision whether the band was going to be in it or not, so I just went along for the ride. Honestly, it’s a lot harder to say no to something than it is to say yes. If you say yes then maybe you’ll wonder if you made the right choice and have to live with regret, but if you say no then you’ll always have to wonder.

So when did the decision happen?

It happened right in the first few months of us trying to work together. Kiyomi and I were already friends and she asked me to help her write songs for their new album, which sounded like fun. That led to an invitation to go to Toronto to record it, and it was right around that time the auditions were happening. Clearly Hunter Valentine did end up being cast and the story was going to be about recording the album and going on tour. 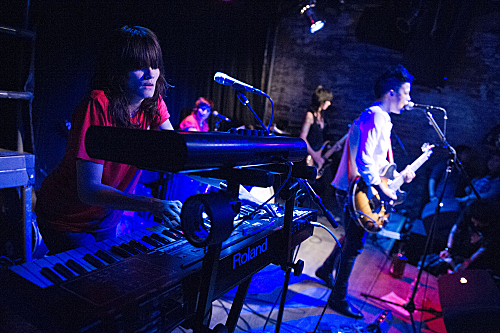 What has it been like watching your life play out on screen? Is that weird for you?

You know what’s the weirdest thing? Reading Autostraddle recaps. I read them and I’m like, “Oh wait, that’s me! They’re talking about my keyboard!”

I’m actually more nervous to be talking to Autostraddle because you guys are smart. I caffeinated myself in preparation because I don’t want to be too slow or ridiculous. I mean, a little bit of ridiculous is fine, if it’s funny. If we can pull off something that is a little ridiculous and a little funny and a little witty then I’ll be super stoked.

Way to put on the pressure. Had you seen The Real L Word? Did you know what you were getting yourself into?

I had no idea! I watched part of an episode once because one of my friends was obsessed – it was the scene with the creamed corn and the strap on scene and I was like, “Wow! This is not good television!”

I’m not a big reality television fan. I mean, I watch Survivor with my mom but that’s about it. So when we were auditioning I thought I’d better see what the show was like. That was a really interesting experience, watching the show and wondering if that would be me one day — would I be wearing pants or pumps?

So did you have “no creamed corn” as a stipulation in your contract?

That’s a great question. I’m not allowed to discuss what was and wasn’t in my contract, unfortunately creamed corn falls under non-disclosure.

How did your wife, Donna, react when you told her you were auditioning? Did she think you were a little crazy?

She always thinks I’m a little crazy. She basically said, “You’re a musician, and this show could be a way to get people to hear about your music — they may hate it, they may hate you, they may like it — at least you’re getting it out there”.

As far as being on the show, we talked about it in the context of what we would have done if this happened ten years ago — then there would have been no hesitation, we’d have been in our early twenties and we were even more crazy back then, going to lesbian parties and running around New York and just generally getting into trouble. But now we’re in a different stage in our lives, which is where that hesitation originally came from.

You already have a really great band, Clinical Trials, and so I’m curious about what drove you to join another one?

It started with a conversation — a telephone conversation — between Kiyomi and I. She said that she respected me as a musician and wanted me to infuse a bit of my sound into what they were doing. I knew that they were a lot further along than my own band was — they had more fans, they had this poppy sound that appealed to a lot of people. So we discussed and agreed how it would be mutually beneficial for both parties. I wasn’t really looking for something new, the opportunity just came up. Then all the reality craziness happened. 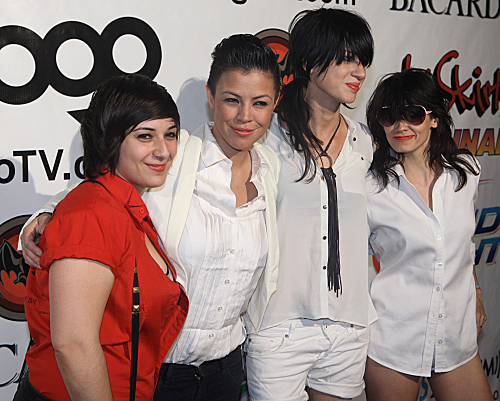 So far this show is portrays Kiyomi as someone who has a very strong personality, who is a little bit cocky. Is this the Kiyomi that you know?

It is and it isn’t. She does have a very strong personality and we’ve clashed a few times. As my wife has pointed out, we’re both brats. So yes, there’s a part of her that can be abrasive. She’s very focused on her music goals and whatever gets in the way of achieving success can get pushed aside.

But there’s this other side to her. She’s charismatic and she’s fun and she can be incredibly generous and caring and loyal, and these subtleties aren’t really coming across on the show because there’s so much conflict! Also, telling a story about the beauty of friendship probably isn’t all that interesting. Are viewers going to tune in for hugs, or are they going to tune in because two people are screaming at each other on stage?

When you witness all of the girl drama that Kiyomi has with her non-girlfriend, Ali, does it make you feel a sense of relief that you’ve got Donna back home?

Absolutely! I think most people want to find their soul mate and I’ve been very lucky to have found mine. Those two fight a lot and it can be tough to watch. People just want to find their partner and they’re trying to figure out whether they’re going to work as a couple.

How did you and Donna meet? 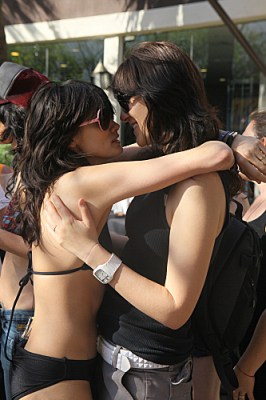 I was handing out flyers for a show, it was this drag king show with a musical act in middle. I saw this cute girl sitting on a curb and I thought, “I’m gonna give this girl a flyer!” and I did. She was so cute and so drunk — she was in grad school, she had just finished writing a paper and was out celebrating.

I was so upset because she disappeared before I could get her number. Then she showed up ten minutes later eating a falafel and I knew then that she was the one for me — the drunk girl eating a felafel in the middle of a bar. She was so sweet. We ended up hanging out another night when we were both more sober and we clicked, we both realized that we had good hearts and that was it.

SO what was the proposal like? Was it as orchestrated as Whitney’s?

No. I wanted to wait until our anniversary to propose, but then I started having these terrible nightmares about Donna not liking the ring and not liking the proposal and so I kept waking up in the middle of the night all sweaty and upset. Naturally she wanted to know what was going on. When I finally admitted that the nightmares were about getting her a piece of jewelery  that she didn’t like, she put two and two together and ruined the surprise!

So I wanted to get down on my knee and tell her that I loved her and that I wanted to spend the rest of my life with her, but I didn’t get the chance to do the romantic, suave proposal thing. No chance to do any of that Romeo crap.