I’ve always felt completely objectified by advertisements. As a woman, obviously, and a black woman especially, but not always for the reasons you might think. As much as I believe it is truly important to have people of color in mainstream media, whenever I see a person of color in a cereal ad, I want to shout: “STOP TRYING TO SELL ME CHEERIOS! I don’t want Cheerios because the beautiful interracial couple and their adorable mixed race child on your advertisement looks JUST LIKE ME. I want Cheerios because they’re freakin’ delicious.” When I see people of color in advertisements, I actually feel more like an “other.” It shouldn’t feel this way. It should feel normal, like the real world, like we’re finally being seen. Instead it feels contrived, because colorblindness is a total fallacy, and I’m smart enough to know that advertisers are really trying to sell me some junk I don’t need, and that may in fact be killing me.

As a performer myself, I am an advocate for bringing more color to mainstream media. Moreover, there has to be a wider representation of the color spectrum in all aspects of entertainment. I don’t think it’s a secret that people of color, especially women of color, are regularly exploited in order to line the pockets of the primarily white men who run the entertainment industry. There has also been plenty of discussion about how people of color are used in advertisements meant for consumption by white people in order to market a product as “cool” or “urban.” We all know white folks love them some cultural appropriation. Slightly more complex, however, is the exploitation that occurs when POC are featured in advertisements marketed toward other POC. 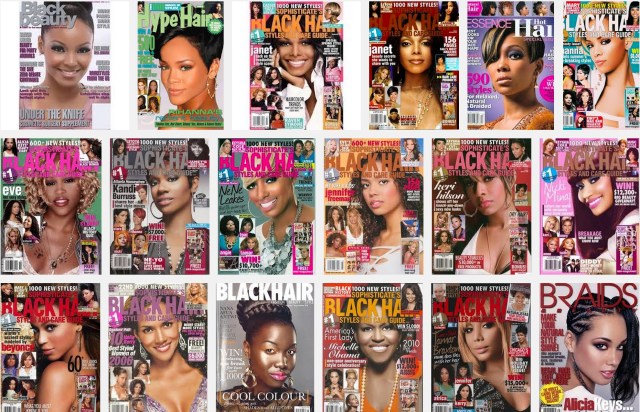 A few products that come to mind are menthol cigarettes, Black hair products, and fast food. What is the common denominator here? All of these products are killing us. Cigarettes and fast food pose an obvious health issue. Black hair products, while not all as harmful or expensive as relaxers and weaves, can be physically and emotionally damaging for Black women. Many Black women spend an exorbitant amount of time and money attempting to conform to a white standard of beauty. The advertising industry and the companies for which they work set this standard. And while people should feel free to express themselves with whichever hairstyle they so choose, there is a massive industry that relies on perpetuating a whitewashed version of Black beauty. A look at almost every cover of Sophisticate’s Black Hair Styles magazine will show you that when they say “Black Hair,” they mean wigs, weaves, and relaxers. Very rarely do they feature women with natural hair, and when they do, it is to sell a product. I know this because I once did a spread for Black Hair, and I wore my hair naturally. They used this as an opportunity to use my face to sell a bunch of products I do not and would never use. They also falsified pretty much all of the interview, paraphrasing some parts and completely fabricating others. Ironically, their September issue is a tribute to going natural, but one cover story does not a revolution make.

Early examples of advertising directed squarely at people of color are a series of late 1950s Pepsi advertisements called “The Sociables,” which I stumbled upon in college while marveling at the not-so-subtle misogynist and racist overtones of retro ads in publications like Esquire and Ebony magazine. There were versions of the advertisement published in white magazines featuring white people, but the versions published in Ebony featured “affluent” African American families enjoying Pepsi. While a refreshing change of pace from the racist stereotypes used to sell products to whites in the past, this targeted advertisement presents an unrealistic portrayal of Blackness, at least for the time: The African American Dream; access to all of the material things that make whiteness so appealing. These are “respectable” Black folks. 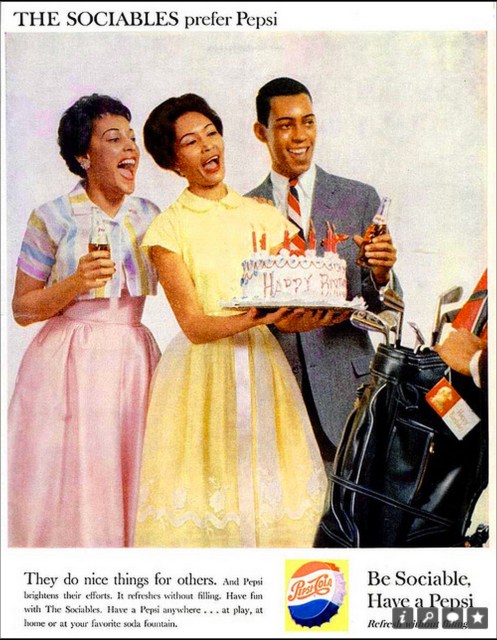 In fact, Pepsi was long considered to be the “Black Coke.” Taking advantage of the fact that Coca-Cola marketed almost exclusively to whites, Pepsi cornered the African American market and event went as far as hiring a “negro markets” advertising team in the late ’40s. Eventually people caught on, and began associating Coca-Cola with whites, and Pepsi with Blacks. In an effort to reverse this image and expand their market, Coca-Cola formed a relationship with the NAACP [National Association for the Advancement of Colored People], who even to this day lobby in favor of Coca Cola. When Mayor Bloomberg tried to ban large sugary soft drinks in NYC, the NAACP stood up in favor of Coke, under the guise that the ban would negatively impact minority business owners. 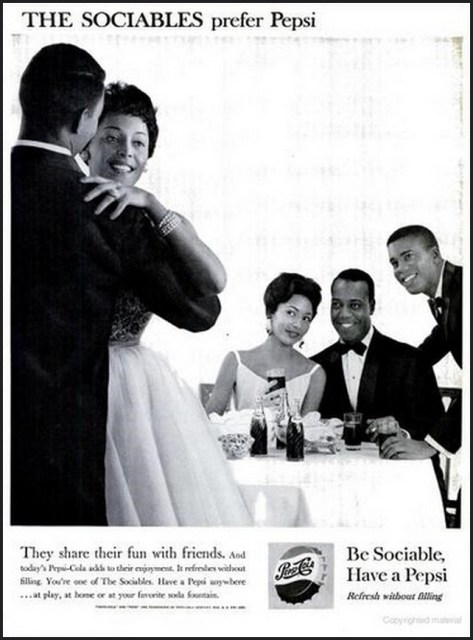 According to Clint C. Wilson II and Felix Gutierrez, authors of Advertising and People of Color, advertising companies began catering to Black and Latino audiences in response to Civil Rights era consumer boycotts of companies that practiced racist policies, and adversely supported companies that employed non-whites:

This philosophy of repaying the corporations that invest in the minority communities through consumer purchases was replicated in other cities. It was followed by slick advertising campaigns directed at minority consumers. In 1984 the same line of thinking led to the brewers of Coors beer attempting to end disputes with Blacks and Latinos by signing controversial agreements with the [NAACP] and five national Latino groups that committed the brewery to increase its financial support of the activities of those organizations as Blacks and Latinos increased their drinking of Coors beer.

We can add soda and beer to the laundry list of physically harmful products companies are selling directly to people of color. And not because the brewers are concerned about the lack of access to affordable booze, but because “there’s money in it,” stated Carolyn R. Jones, executive vice president of Mingo Jones Advertising, in 1984. Wilson and Gutierrez explain:

Among the factors [Jones] cited as making Blacks desirable customers was a reported disposable income of more than $150 million, a “high propensity for brand names and indulgence items,” a high degree of “brand loyalty,” a young and growing population, growing education and income, concentration in the nation’s largest 25 cities and “its own growing media network.”

Given that Ms. Jones was writing in 1984, it’s easy to presume she was referring to the booming Hip-Hop culture of the ’80s, a genre that became instantly popular amongst both urban blacks and suburban white teens. These were demographics that record companies and clothing brands were eager to exploit. Just take a listen to Run DMCs “My Adidas” and tell me it wasn’t product placement at its finest. That trend has been Hip-Hop’s unfortunate legacy to this day: a means of using Black people to sell Black culture. 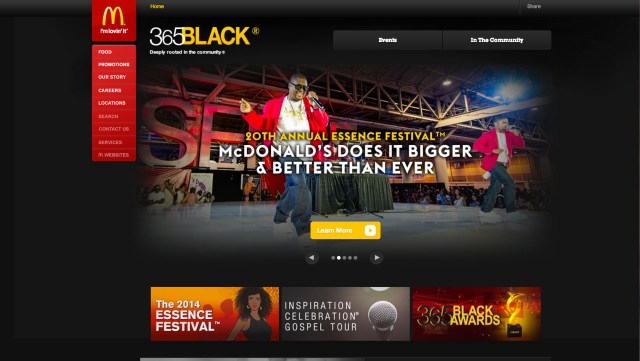 Fast-forward to the 21st century, and you’ll find this abomination: McDonald’s “365 Black.” Their tagline? “Deeply rooted in the community.” This is McDonald’s almost laughable attempt at convincing Black folks that they are not trying to murder them with their poisonous foodstuffs, but rather a company that promotes racial equality — nay, is a beacon of morality and a pillar of the community. The website boasts McDonald’s as the breeding ground for such superstars as Keith Sweat and Laurie Ann Gibson.

For a moment, let’s ignore the fact that fast food is ostensibly responsible for a nationwide obesity epidemic, providing the only affordable food option for poor people of color living in “food deserts.” Let’s just focus on how gross it is to market this junk directly to Black people. The website encourages young people and students to become a member of “Team 365 celebrating African American culture 365 days a year,” as opposed to the oft-lamented extra short month of February granted to us by the government. Hiding in plain sight, that’s what this is: a marketing strategy that uses Black people as human shields from accusations of promoting environmental racism. We’re not racist! Our best friends are Black people! What a load of baloney. Maybe if more people of color were the ones owning the big businesses and making the advertisements, they wouldn’t come off as so contrived. Or maybe they wouldn’t seem that way purely because of circumstance: knowing that there is racial equality would take the bite out of seeing Black people used to sell products.

We can’t talk about POC in advertising without acknowledging that Asian and Native cultures are routinely mocked with incredible fervor. Advertisers take special care to exploit Blacks and Latinos in a way that doesn’t come off as racist, but has the same subliminally damaging effects. Asians and Natives, however, don’t receive the same courtesy. They are still reduced to stereotypes and artifacts used to market products and nobody seems to care at all.

So, it’s no wonder that whenever I pass by an advertisement with a bouncy haired light-skinned brown woman selling me lavender scented tampons, or a burger that looks nothing like it would if I bought it at the advertised fast-food restaurant, I get uncomfortable. Even though I am myself a bouncy-haired light-skinned brown woman, I do not relate to this airbrushed version of myself. Instead, I see Uncle Sam casting his blue-eyed gaze and shoving his pale, crooked old finger right at my forehead: We Want You!.