As y’all may or may not know, when a planned post by a freelancer doesn’t come through, it falls on us, the Senior Editors, to find a substitute post. This is particularly challenging when the post in question is a Saturday Morning Cartoon, because none of us are comic artists! (Except the last time this happened, when Heather, a true renaissance woman, drew a damn comic.)

When that happened this week, I jokingly suggested that I could do an illustrated ranking of every hotel breakfast I consumed on my recent 10-day road trip from Detroit to Los Angeles (accompanied by my gal pal Sarah) (she drove the whole way, what a gal pal!), and well, my friends, here we are. There’s only one problem! I can’t draw! Luckily with a little help from Shutterstock and a little bit of apparently untapped talent left over from my maiden days of MacPaint, I threw together a real artistic masterpiece for you. 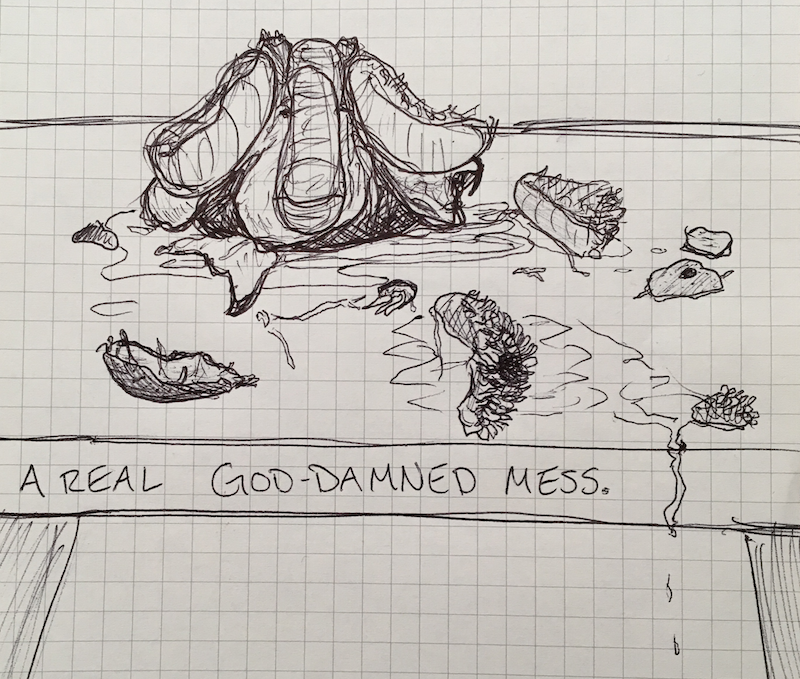 We were possibly the Grand Stay’s only tenants on this particular fine Wisconsin morning for some reason, or maybe a few reasons I can think of. This breakfast was both a challenge and a low-key act of emotional violence. Sarah consumed half a a hard-boiled egg with an unhappy facial expression. I struggled to peel an orange with my hands and then a plastic knife, eventually resorting to trying to flip the orange inside-out in order to scrape orange pulp from the inside of the half-peeled orange with my own grubby fingers, then submerging them in sub-par yogurt. Ambiance was vaguely of the “everybody is dead and gone” variety. 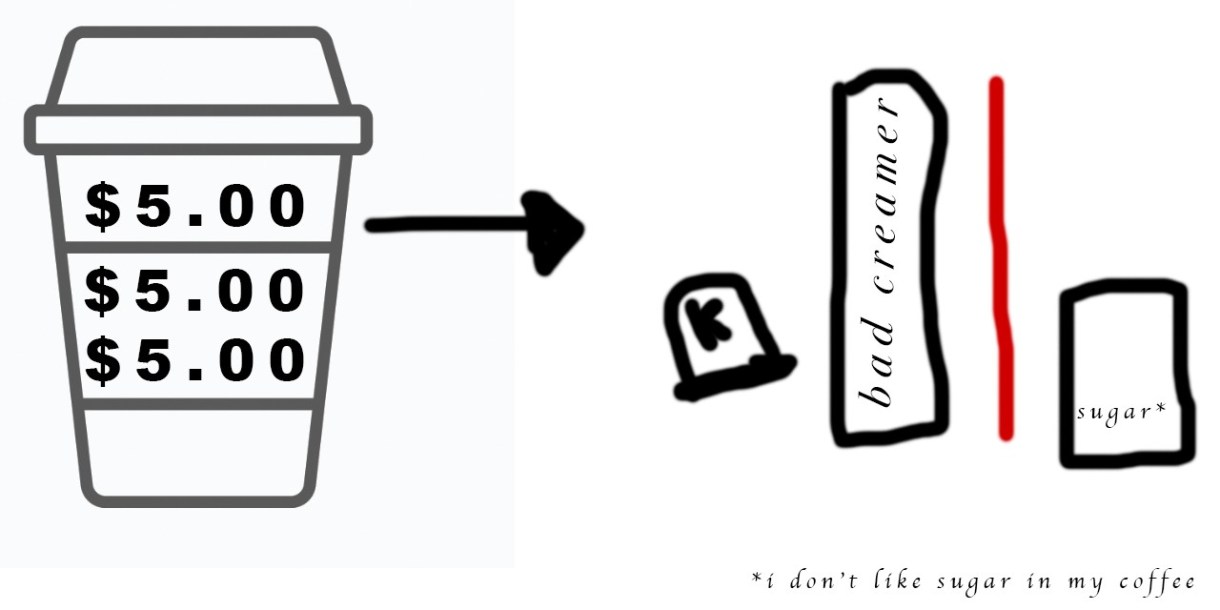 I’d like to give ten thousand stars to the Breakfast Buffet at The Wynn, which’s where we actually had breakfast. But before breakfast we were committed to the delusion that we’d finish the puzzle we’d started of Mount Zion the night before, and thus required coffee for those few early morning hours, and I’ll be damned if this hotel wasn’t trying to charge us $5 for a cup of coffee! I know this ’cause the cup was wrapped in high-pressure plastic that I chipped a nail trying to open and it said “$5.00” all over it, probably in response to complaints from customers who couldn’t fathom that any institution would charge more than the tire shop or the bank for coffee (coffee is free at the tire shop and the bank). If only I’d read the 79 TripAdvisor reviews lamenting this very fact, I could’ve come prepared with my own Keurig cups (???!). 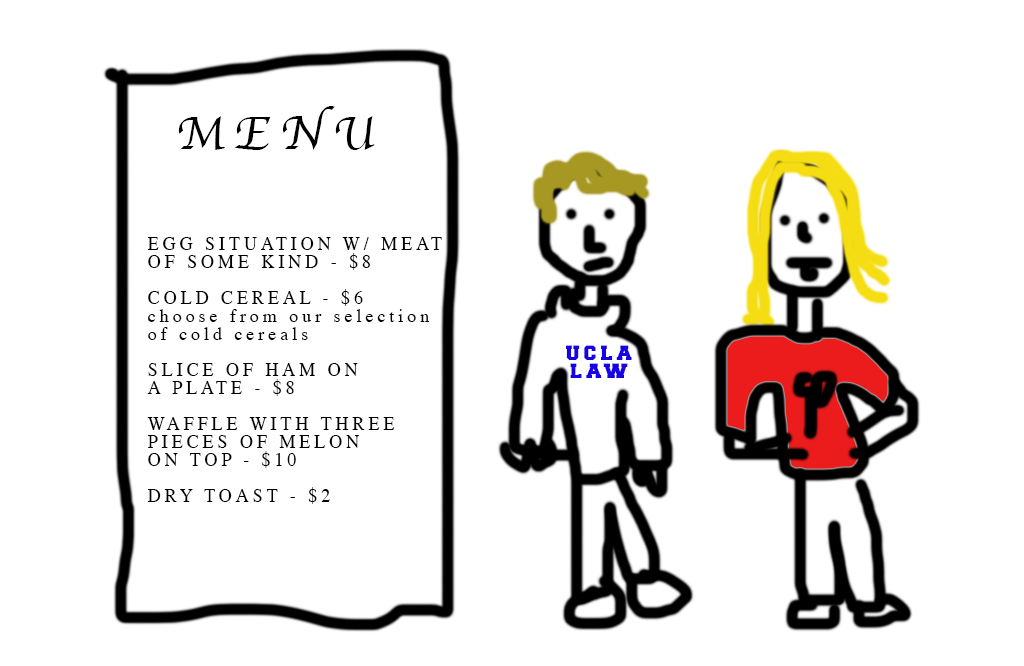 This hotel was a bit of a mixed bag, specifically the type of mixed bag that doesn’t include free breakfast. When we asked about the breakfast situation, we were directed to their off-season lounge. What we found there was a slender menu, like the kind you might find in a sad empty airport terminal restaurant called “Wings” at 6am between your first cheap flight leg and your second cheap flight leg when you are considering your life and your choices and if you smell okay. We glanced at this sad menu and chose a better life for ourselves by leaving the establishment and hitting up the local Einstein Bagels, along with literally every other resident of South Dakota. We waited in line with our crossword puzzles like we were having brunch in Portland and left with two perfectly fine bagel/egg situations.

It pains me to low-rank the free breakfast we received at this romantic hotspot, a charming establishment staffed by eager beavers and frequented by a steady rush of Mormon couples looking to spice up their marriage by copulating in carefully designed theme rooms ranging from fun (“Biker Roadhouse”) to bizarre (“Phantom of the Opera”) to problematic (“Sultan’s Palace”). Truly, the hotel itself did nothing wrong. We’d rested our weary heads and tentatively enjoyed a jacuzzi in the Moonlight Sonata suite, apparently designed for Twilight fans who want to play hide the salami upon an Edward & Bella pillow, adjacent to a mural of Forks, which is apparently the hometown of Bella Swan. Listen; Sarah loves vampires. We were nervous about being a lesbian couple in a hotel recommended enthusiastically by Mormon marriage counselors, but they were extra gay-friendly and really sweet!

1. The night prior, the frisky couple ahead of us secured the hotel’s sole copy of the first Twilight film before we approached the catalog, leaving us with only Bonus Features DVDs and Twilight Breaking Dawn Parts 1 and 2, which I’ve obviously never seen. Sarah insisted that TBD1 was a terrible film and we should abandon the Twilight-watching plan altogether but I insisted upon a full thematic experience. Now I can never UNsee the emaciated Kristen Stewart impregnated with a tiny Robert Pattison who wants to break her bones from the inside out! It was all I could think about for hours. For days, even! I’m still thinking about it!

2. Our yogurt parfaits had a promising palor, but alas, we didn’t get any silverware. We would’ve pursued silverware acquisition after our romantic waterfall shower but we were meeting Sarah’s friends for brunch in town so it was nbd.

In conclusion, because we only requested two parfaits and not the full free breakfast, who am I to judge. Basically I’m reviewing Twilight Breaking Dawn right now, in which everybody eats each other instead of food. 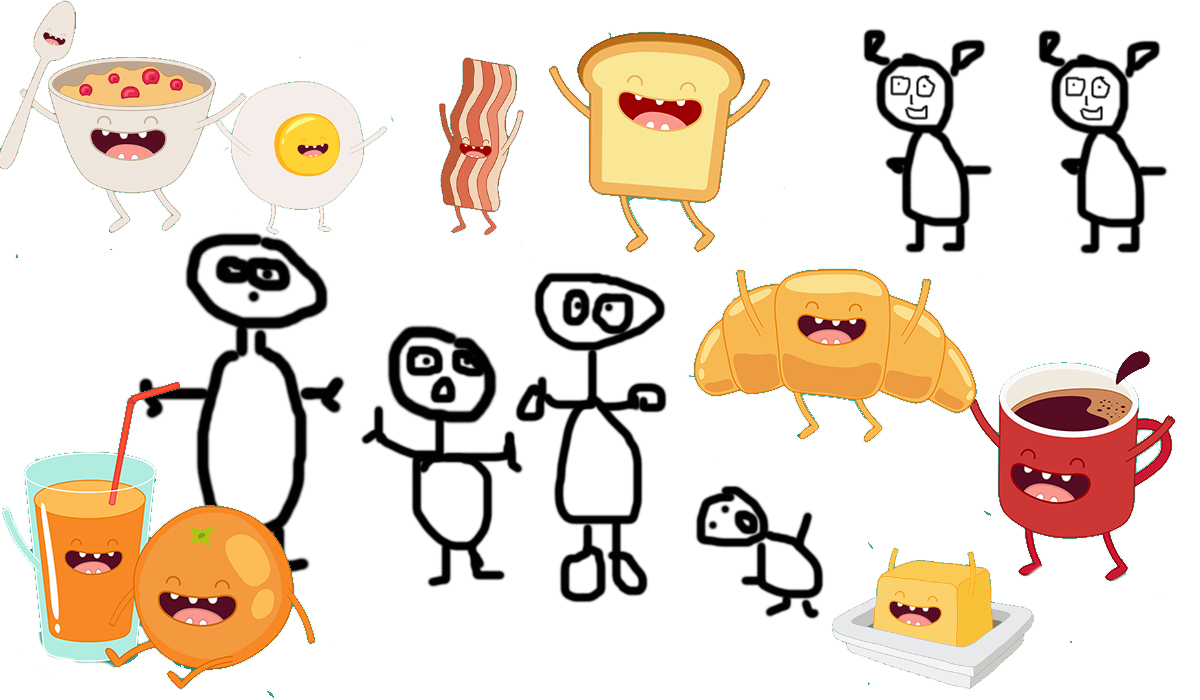 This well-stocked breakfast buffet of hot and cold items offered copious opportunities for all manner of morning consumption, although when I said, just now, “that breakfast was pretty good, right?” to Sarah, she made a face. More importantly: unfortunately we realized during this meal, as we did many times throughout our trip, that the world was not a real world but instead a parallel universe full of props and character actors hired for our personal amusement or lack thereof. A nearly identical succession of families joined us in the dining area — all consisting of a weary patriarch in vaguely winter-sporty attire, a bedraggled and exhausted mother in leggings, and no less than three, but as many as five, small interchangable blonde children. Every family also possessed one (1) infant in a stroller. They were all variations on a theme, like stock photographs with different colored hair except with the same-colored hair. I wasn’t annoyed by them, just troubled that we were in the upside-down. “This is The Bad Place,” Sarah theorized. 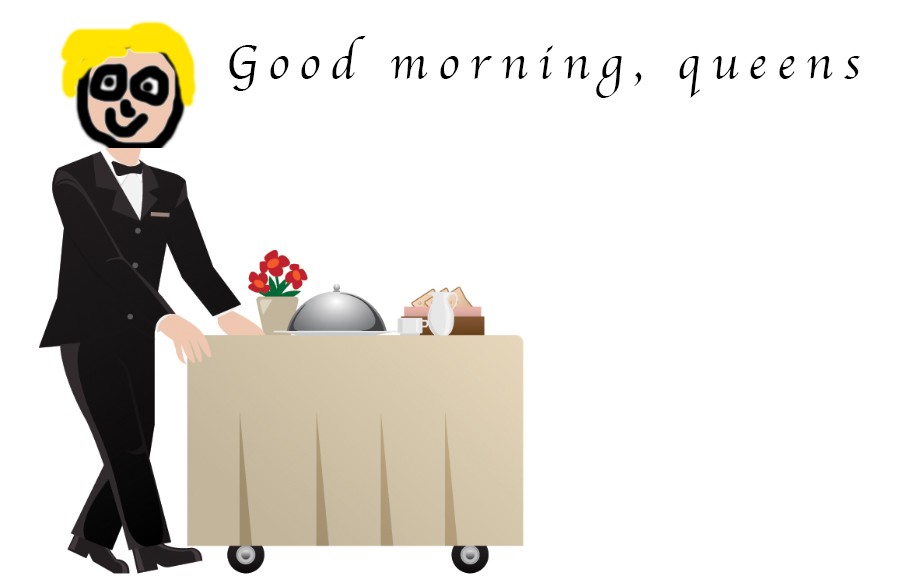 As the only restaurant serving Thanksgiving dinner in Jackson Hole — nay, the only restaurant serving dinner at all on November 23rd — on the day we planned to arrive there, we had no choice but to use all of Sarah’s credit card points to book a room at the Four Seasons, where every employee is wholly dedicated to meeting your every need and making you feel like the Wealthy Queen you are. Apparently at a certain level of Wealth, the various prices of assorted items become irrelevant. We filled out our breakfast-in-bed order door-hanger with naiveté and youthful enthusiasm, despite its lack of declared prices. It was pretty good but it loses points for costing ten million dollars. On our second morning we enjoyed our free Nespresso with chilled cream (take note, Delano), and had a reliably mediocre breakfast at Perkins in Idaho Falls. 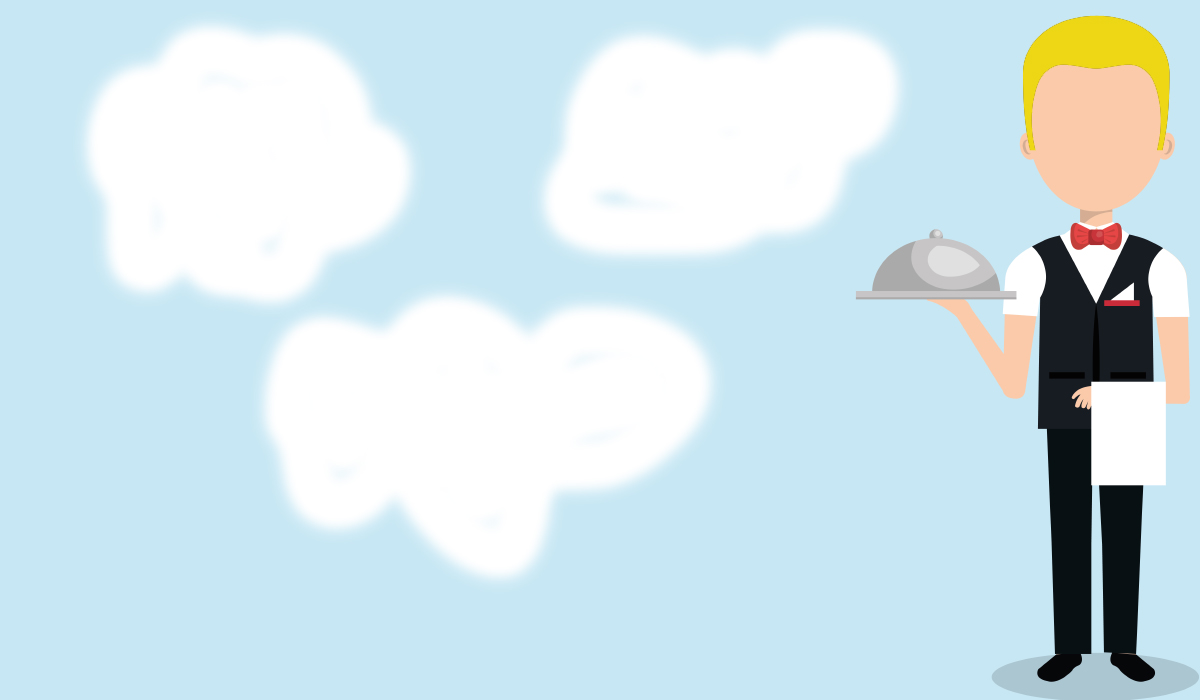 At The Inn on The Cliff, you simply call “0” and your very own personal Mormon will arrive at the door to your minimalist room on the cliff bearing a tray laden with two sets of four free items: a petite glass of orange juice, a hard boiled egg on a tiny stand like in a children’s book, a yogurt parfait, and a cinnamon cloud from heaven or wherever we go after we die! The night prior we’d lost power for two terrifying mortal hours, and the bed (world’s most comfortable) and this delivery offered much needed respite. The cinnamon rolls tasted like clouds, that’s why I said they were cinnamon clouds. The bed also felt like clouds! It’s probably because we were in the mountains, which are close to the clouds, and also to G-d. 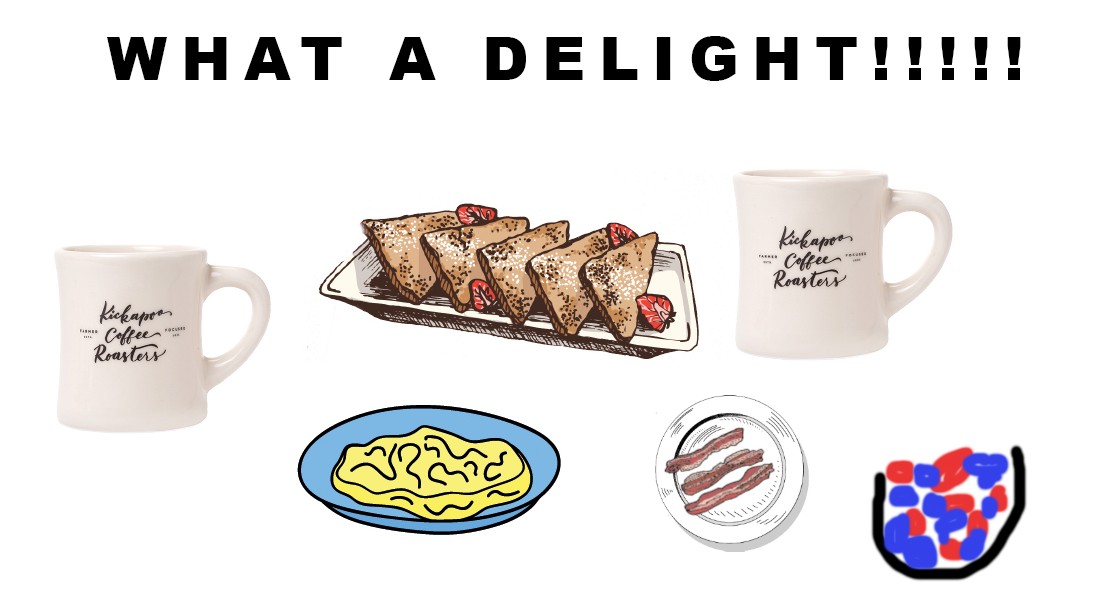 Wow! This hotel was a real charmer! Look at that berry cup I drew like Van Gogh! How often can you get a berry cup delivered to your very own bed for $5 in this cold world? I’ll tell you when: not often, but definitely at the Charmant. As discussed extensively by me elsewhere on this website, there’s a worldwide epidemic of self-described “fruit cups” being entirely melon and cantaloupe. Sure those fruits are fine and good, but just call it a “melon cup,” you know? Anyhow, this hotel was our favorite of the trip, and I highly recommend it to all lacrosse fans out there, which is probably a lot of you, because lesbians love lacrosse. That’s a fact!!!!!!!