January marks the tenth anniversary of Thirteen, the Nikki Reed and Evan Rachel Wood film based loosely on Reed’s life. IMDb has the film’s synopsis as “A thirteen-year-old girl’s relationship with her mother is put to the test as she discovers drugs, sex, and petty crime in the company of her cool but troubled best friend.” My little gay fourteen-year old brain had the film’s synopsis as “two girls make out.” At the time, Thirteen was being buzzed about because of the self-harm, drug use, and sexualization of underage girls present in the film. Since I was just a gay babe that didn’t realize I was such, I was CERTAIN that if I ever tried to rent this movie at Blockbuster, everyone would think I was gay. Because straight people are super paranoid about that kind of thing, right? So I didn’t.

This is all to say that Nikki Reed and Evan Rachel Wood Bisexual live streamed a Q&A session in honor of the movie’s 10th anniversary. Even if you’ve never seen it, this is worth checking out solely because of Wood’s backwards hat and suspenders situation. When someone asked the question that’s apparently been tumbling around their head since Evan Rachel Wood Bisexual came out as bisexual, if she had a crush on Reed during the movie, the feed cut out. And just when they started wrapping up the session and you thought all hope was lost, someone off camera reminds them that the viewers never actually heard the full answer to that question. Blessed be that person. There are three parts to the session but the part we’ll be discussing happens around the 11 minute mark of this one.

Now I’m no stranger to filling in someone years after the fact that I had a crush on them back in the day, even if I couldn’t identify it as such at the time. I know how awkward that moment can be and so I feel for Wood because she had to do it TWICE. Wood, the champ that she is, gets back into the topic with a joke. “When it cut out we were making out the whole time. I’m so sorry that you missed it.”

Apparently they’d never discussed whether Wood had a crush on Reed during filming before. They’ve only rekindled their friendship over the past year (thanks to Twitter) so I’m not too surprised that two married women haven’t discussed a childhood crush. Once Wood gets going, Reed temporarily curls into a little ball which made me have a crush on her for a hot second. She seems bashful and flattered even though they’re speaking about events that transpired over ten years ago. It’s pretty cute. Wood fesses up to her crush:

Reed chimes in and notes that she doesn’t meant to devalue Evan Rachel Wood Bisexual’s very bisexual feelings but that she thinks feelings of curiosity and confusion are very common with teenage girls.

Your first girl friend kind of represents your first time exploring love and what it means to love someone like that outside of your family and it’s not necessarily sexual although your body’s going through all these crazy things. The most making out I’d done up to that point in my life was with Evan in this movie and that was my first time experiencing what that was like and so you have all these crazy feelings and things that are happening–it is all mixed into one. 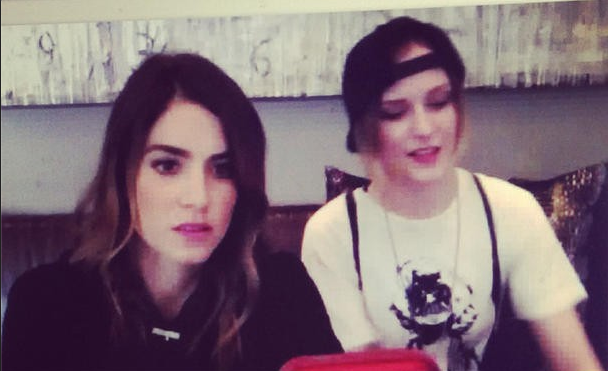 Wood goes on to state that she thinks a lot of girls get crushes on their best friends. They then talk about how they practiced for the kissing scene and are only now realizing that in some ways, their real lives began mirroring the movie. Both of them agree that this revelation changes how they interpret that experience and makes them reflect back on their own motivations. The video ends with Reed jokingly, but poignantly asserting that while making Thirteen they were “just two girls in love.” If a time machine is ever invented, do not go back in time and tell little Brittani this information. Her brain WILL explode.