Tonight, NBC will bless us, once again, with their annual Live! musical production. It’s The Wiz Live! and it’s gonna’ be so damn good. Honestly, it wouldn’t take much to top NBC’s last two Live! productions, Peter Pan Live! and The Sound of Music Live!. Peter Pan Live! gave us feelings for Allison Williams we really weren’t ready for, but was otherwise awful and kinda’ racist. The Sound of Music Live! was straight up milktoast. But musical theater geeks like me will watch anyway. Especially tonight, because even if The Wiz Live! is silly and over-produced like the last two, it is still going to be effing spectacular.

I mean, look at this flawless, gold star cast! 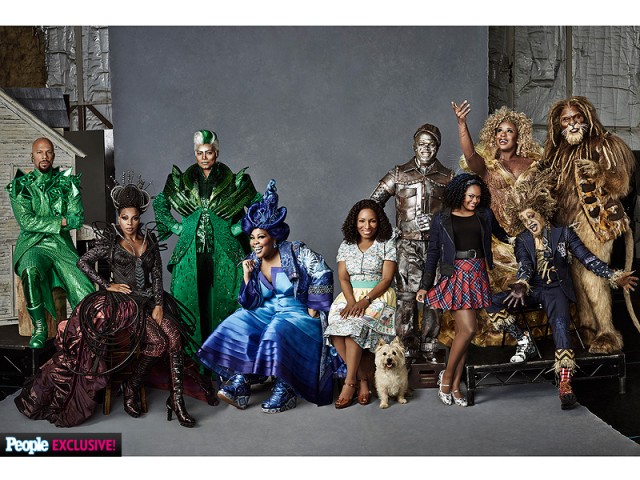 The original Dorothy in the 1975 broadway production of The Wiz, Stephanie Mills, is playing Auntie Em. Dorothy is newcomer and real talent, Shanice Williams. Glinda the Good Witch and Evilene the Wicked Witch are played by Uzo Aduba and Mary J. Blige, respectively, and good lord, their dresses are incredible! The Wiz, herself, is none other than Queen Latifah, in some sort of David Bowie-ish hair and makeup situation that I’m getting used to. Ne-Yo and Common and David Alan Grier and Amber Riley and Elijah Kelley (who musical nerds might remember from the Hairspray movie) are in the mix, too. Goodness gracious, what an ensemble!

Here’s a sneak peek clip that is giving me life, oh yes:

Oh gosh, look at Mary J. Blige absolutely killing it in this other clip. EXCELLENCE.

Here’s some behind the scenes action with the stars, oh my:

According to the most recent 2011-2012 stats from the Asian American Performer’s Action Coalition, white non-hispanic actors occupy 79% of the roles on Broadway. African American performers account for 14% of roles and Latino and Asian performers for 3% each. There is still an urgent need to see Black performers’ in a theatre production that centers and celebrates Black artists. Alaina, my theatre nerd co-host for tonight’s liveblog, recently posted a list of plays they’d like to see recast with Black actors, that really drives home this point. What’s great about The Wiz Live! is that, unlike a Broadway revival (which is slated for the 2016-2017 season, actually), this show is coming into people’s homes on their television via basic cable, accessible to people who can’t typically afford the ticket prices for live theater.

Also, I’m looking forward to some strong female characters. I do like me some strong female characters, as my Netflix recommendations prove. The director of The Wiz Live!, Kenny Leon, says choices were made to make a statement “about the treatment of women” in this version of the show. Dorothy will have an expanded backstory that gives her more depth and direction, as will the female Wiz, a role traditionally cast with a male actor. Leon says, “All of the women in this story, they make their own decisions…men are not speaking for them, and that’s the way it should be anyway.” It is. I’m interested to see how it all plays out.

Alaina and I are going to be right here tonight, singing along and slinging snark and commentary. The liveblog will start at 8 p.m. EST. See you soon!

Alaina: Real dogs and live theatre, I love it.

KaeLyn: Stephanie Mills has still got it. Shit.
Alaina: Camera in the shot #1

Alaina: Spooky wind people! Wait this is my favorite part so far!
KaeLyn: I wish they would stick with a camera for more than 1 second.
KaeLyn: Reusing that Peter Pan Live! rig, I see.
Alaina: Gotta get allll the use we can.

Alaina: Everyone’s in skirts! I’m into this society.
KaeLyn: MERCEDES!

Alaina: I’m in love with her shoes!!
Alaina: I want sushi with Amber Riley!
Alaina: I was her when I was in The Wiz and I feel like we’re really connected
KaeLyn: OMG you are soul twins

KaeLyn: “Sometimes the most dangerous things are the most beautiful.” #femmetruth

KaeLyn: Can you imagine if this was your acting debut?
KaeLyn: I can’t even.

KaeLyn: This was her first NYC audition ever.
Alaina: Like she is KILLING it
Alaina: For the entire United States of America
KaeLyn: LIVE
Alaina: In a really good high def foundation
KaeLyn: She’s going to be like the next Fantasia
KaeLyn: Yes, her skin looks great.
KaeLyn: She could do Clean and Clear commercials next. Or take over for Katy Perry on Proactive duty.

Shanice Williams got me crying. Take us home girl. #TheWiz

8:30 PM: Did ya’ll know Queen Latifah played Dorothy in her 7th grade production of The Wiz? The Root put together a bunch of cool facts about The Wiz Live cast. Great for commercial break reading!

Alaina: the nae nae
Alaina: I love/hate popular culture
KaeLyn: hahahahahaha when does the twerking start?
KaeLyn: actually I’m ready for twerking
KaeLyn: I hope there is twerking
Alaina: PLEASEEE
KaeLyn: What if Big Freedia made a cameo
Alaina: WHAT IF
KaeLyn: AZZ EVERYWHERE, that’s what
Alaina: I just want every queer hip hop artist in NYC to make a cameo
Alaina: MISANDRY

8:40 PM: If you’re not singing along right now, you’re doing it wrong.

8:41 PM Commercial break reading: NBC Black interview with Stephanie Mills on being a part of The Wiz, 1975 until now.

Alaina: Neyo has a grill because he’s the tin man!
Alaina: Also, this song is about the importance of lube.

Did anyone else see Ne-Yo just dab!? #TheWiz

KaeLyn: I love everything so far. #noshade
Alaina: Like, this is a huge improvement from the last two live shows
Alaina: Those were good, but this is SO good!

KaeLyn: Don’t give her those shoes?
Alaina: This is not her mom!
KaeLyn: Laser MONKEYS!!!
Alaina: Spooky! This is actually terrifying!
Alaina: She’s jumping in bedazzled heels!

Just remembering that #TheWiz is why I never liked crows or monkeys… or parking garages. :-)

Alaina: BUT THESE DANCERS!!!!!
Alaina: It’s like Beyonce Broadway

*waits for poppies to break into “Naughty Girl” by Beyoncé* #TheWiz

Alaina: I want to be able to do this and also have someone do this to me
Alaina: So my friends have identified “Thick Poppy” and “Pregnant Poppy”
Alaina: Bodies of all shapes and sizes!

KaeLyn: Is there really a Wicked ad during this? so meta
KaeLyn: Maybe for all those mad white people
KaeLyn: They can go see Wicked 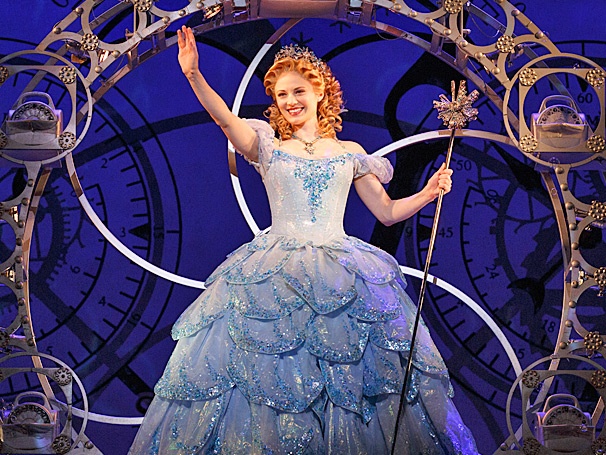 Alaina: This is an afro futurist dream!
KaeLyn: Does this mean that queers are the evolved class in Oz?
Alaina: Seeing Black bodies on stage being flaunted is a really beautiful thing
Alaina: And omg YES the queer elite

KaeLyn: I love this. I could just watch this scene on repeat for the next hour and a half


Alaina: this costume is amazing! this silver contouring!
Alaina: I really wanna know the makeup artist but I can’t find it online
Alaina: whoever it is did amazing work

yo this is how queen latifah romances the ladiesss #TheWiz

I'm not surprised #thewizlive is great. It's well-established that you cannot outdo Black people.

as an acknowledgment of gender fluidity & queerness in black culture. That's what #theWiz is about. About all facets of black liberation

Alaina: This feels like the Activism Song
Alaina: Like, it’s part of the Wiz, but also relevant to life today lol
KaeLyn: #OccupyWeGotIt

KaeLyn: Makes sense—this is the new song
KaeLyn: kumbafuckingya
Alaina: “We’re all in this together.”

About to hit the stage! #TheWiz

KaeLyn: “All Hail, Evilene!”
KaeLyn: Bow down, bitches!
Alaina: She is KILLING that outfit!

KaeLyn: This is my favorite costume so far.
Alaina: She did her one signature dance move already

We done went from negro spirituals, tribal, the gay club and church and one hour. Regular ole weekday for black folks.

Alaina: stilts!!
Alaina: All the monkeys have on thongs

Alaina: All this natural hair!
KaeLyn: So much excellence. And how many dance steps have we seen so far? the nae nae , dab, vogueing, stepping, the peter pan…

Wait! They stepping?! This is the blackest thing EVER on NBC lmao #thewiz #thewizlive


Alaina: Almost every dance from 2015 in that one!

#TheWiz is breaking my heart wide open. it's gorgeous & glorious. and it highlights the absolute lack of melanin on tv.

10:13 PM Straddler, @hollisb, killing it in the comments!

KaeLyn: “All these years later, hiding in the dark.” Yuuuup. #nationalcomingoutday

They're telling #TheWiz to come out of the closet. Is this what they call "meta"?

They done used the word conversating. Lawd, the authenticity has not been compromised. Come thruuuuu, writers! #TheWiz

I am so here for these close ups of greased edges. #TheWiz

KaeLyn: Why does she look like she’s going to have a walk-on on Law and Order now?
KaeLyn: I mean, it’s fine
Alaina: Right?
Alaina: like
Alaina: Yeezy 2016 line with a scarf from Kohls

KaeLyn: BLESS US
Alaina: BLESS US ALL

Alaina: Her crown is her hair!
Alaina: “SHE IS BEAUTIFUL!”
Alaina: Yes she is
Alaina: This show is hers. She just stole the whole show

Shout out to black femmes with gaps who are in tears right now seeing themselves represented with glory.

KaeLyn: Remember when they wouldn’t let Suzanne be in the play on OITNB
Alaina: And look at her now!
KaeLyn: She got hers!

One good witch should have all that power. #TheWiz pic.twitter.com/lGRMRRWTcB

KaeLyn: This girl is insanely good
KaeLyn: She’s 18!
Alaina: No way!!
Alaina: What am i doing with my life
KaeLyn: No I lied she’s 19
Alaina: BUT STILL
Alaina: She’s a baby! and is KILLING IT
KaeLyn: OK Conflicting sources. She’s either 18 or 19. Either way, she is basically a CHILD.
Alaina: OMG!
Alaina: Toto came back!
KaeLyn: I was wondering if we’d ever see Toto again

Alaina: I loved it! It was really beautiful.
Alaina: It felt really important, too, in a way I didn’t know it would!
Alaina: I love seeing Black actors working and all the focus on natural hair and Black styles…it was great!
KaeLyn: I agree! Every bullshit argument about not being able to find enough Black talent for more diverse casting was just blown out of the water. It was excellence in every way. It was so real.
KaeLyn: I cried three times.
KaeLyn: I am just so happy that families all over the US watched this tonight, that kids saw this. And there was such a diversity of bodies and people and they didn’t shy away from gender-bending or frank sexuality and it felt so damn good.
KaeLyn: Like, TV could be this way if we wanted it, if we really, really wanted it.
Alaina: Tonight was really important. Everything is so sad all the time, and sometimes it’s important to just see black people being excellent in an excellent musical.

I MAY OR MAY NOT BE CRYING i haven't had this much #BlackJoy in one sitting in a loooooooong time. my soul needed this #TheWiz #TheWizLive

hey, Black people: we're talented. and resilient. and we shine. we dope. and artistic. I really do love us.

What did ya’ll think? Put it in the comments!

KaeLyn is a 37-year-old (femme)nist activist, word nerd, and queer mama. You can typically find her binge-watching TV, over-caffeinating herself, standing somewhere with a mic or a sign in her hand, eating carbs, or just generally doing too many things at once. She lives in Rochester, NY with her spouse, a baby T. rex, a xenophobic cat, and a rascally rabbit. You can buy her debut book, Girls Resist! A Guide to Activism, Leadership, and Starting a Revolution if you want to, if you feel like it, if that's a thing that interests you or whatever.

KaeLyn has written 213 articles for us.