For years I’ve been hearing about how great Jeremy Whitley’s all-ages comic series Princeless is, but for some reason I never checked it out until now. I already thought that the premise for Princeless seemed interesting (a young, Black princess, Adrienne Ashe, decides that she wants none of this waiting-in-a-tower-to-be-rescued business and sets out with her dragon guardian on her own adventures) but when I heard about the spin-off series Raven: The Pirate Princess, I knew I had to finally take the plunge and check it out. Not only is this series about a princess who doesn’t need to be passive and wait for a brave knight or prince to rescue her, but it’s about a pirate who’s also a queer woman of color. 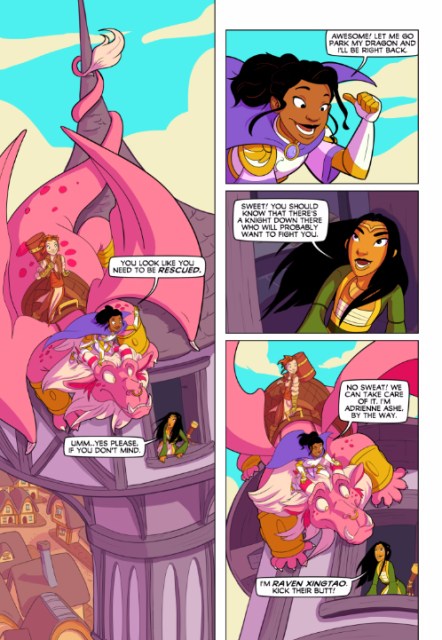 From Princeless: Raven the Pirate Princess #1, art by Rosy Higigns and Ted Brandt.

Raven Xingtao was first introduced in the regular Princeless comic, which is fiercely feminist, when she was locked in a tower and escaped with the help of Princess Adrienne and her friends. The entire third volume of Princeless is about Raven joining Adrienne, her half-dwarf friend Bedelia and Sparky the dragon and trying to find her brothers who locked her in the tower. Raven and Adrienne have a really great dynamic, and it’s helped along by the fact that Raven develops more than a bit of a crush on Princess Adrienne, even if Adrienne doesn’t feel the same way. It has a lot of great action, laughs and is perfect for younger readers. Plus the art by Rosy Higgins and Ted Brandt is terrific. It’s super fun, dynamic and often really cute and it really brings each issue to bright, exciting life.

Soon, the Pirate Princess got her own spinoff series, which has four issues out so far and is releasing its fifth and a trade paperback collecting the first four issues in November. Now, this series is a little more violent, has some more sexual innuendo and probably for slightly older readers than the series it came from, but I think it’s still great for teens. The art has even been changed a bit to reflect that it’s a bit more mature. It picks up right where Raven’s turn in Princeless left off. Raven has, with the help of Adrienne, commandeered a ship is now looking for a crew to help her bring her brothers to justice. 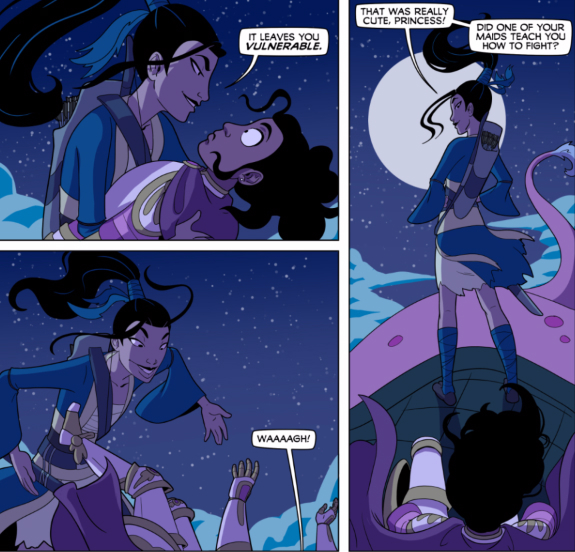 Boy oh boy does Whitley know how to write endearing characters. Pretty much from the first time they appear on panel he has you rooting for Raven, Sunshine, Katie and Ximena all the way to the ends of the earth. They’re funny, they’ve got their own, distinct motivations, they’re brave, they’re clever, they make for great friends, they’re exactly the kind of people that you’d want on a pirate crew, or exactly the kind of people that you’d want to read a comic book about. I love the relationships between these women, especially when Raven’s involved. From what I’ve read, it doesn’t seem like anyone knows she’s queer, even though she keeps on dropping hints about not being interested in finding a husband, thinking girls are pretty and moving the hair out of her friend’s face. Honestly, I can’t wait to not only see what Raven and her crew do while they’re sailing the High Seas, but I also can’t wait to see Raven finally find a girl who feels the same way about her that she feels about them. There are even hints that this might have already happened with one of her crew members, Sunshine.

Like I said, the series does it best to always put a feminist foot forward. The heroes are all young women, a lot of the men have sexist views that are constantly being challenged, two young boys are playing with dolls and fighting over who gets to be the girl, things like that are sprinkled throughout the book. There’s a really terrific (and hilarious, if groan-inducing) set of pages where Raven is interviewing potential crew members and it’s just a parade of one clueless, racist and sexist creep after another. It even manages to skewer men who try to use “fake geek girl” and #notallmen arguments. In addition to that, the cast is incredibly diverse, both the hero of the Princeless series and this spinoff are women of color. And the queerness didn’t stop with Raven’s unrequited crush on Adrienne. 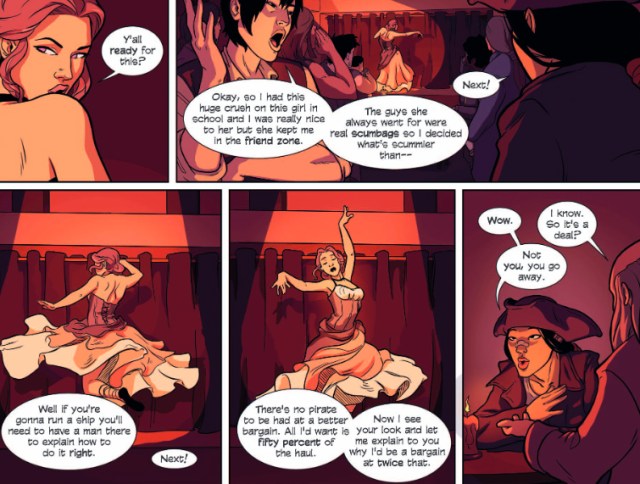 From Raven: The Pirate Princess # 2, art by Holy Riggins and Ted Brandt.

This series is really terrific, and I can’t wait to read more. Luckily, I can go back and read other Princeless comics in addition to to upcoming issues. These comics are a lot of fun, which is something we don’t normally get to see in stories about queer women. They’re also totally action packed. I know I’m constantly looking for action movies starring women, especially queer women and women of color (and both!), and this comic hits all of those spots. I’m kind of embarrassed that it took me so long to start reading this comic. Don’t be like and sleep on, go pick up your copy right now.

Niobe: She is Life #1 (Stranger Comics)