Peritale, the webcomic by Mari Costa, starts out with the opener “Once upon a time, there was a fairy with no magic.” This seemingly sad or foreboding intro is offset by an illustration of that fairy, who we see bright-eyed with a giant smile on her face. This sets the can-do, never-give-up attitude and bright and welcoming look that permeates the rest of the comic and makes it so great. Peritale is a super terrific example of an all-ages webcomic that’s great for younger readers and older. No matter what your age is, if you like magic or fairies, you’re probably going to love Peritale. 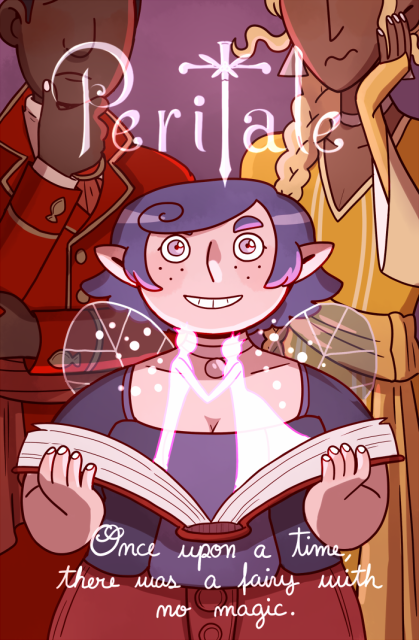 When we’re introduced to Periwinkle, the aforementioned “fairy with no magic,” we see her being left behind from the rest of her fairy class on a field trip because she can’t fly. What might have ruined another fairy’s day is instead turned into an opportunity to explore and learn for our hero. It’s a great theme that makes this comic a joy to read with each update.

This comic does a great job of balancing adorable humor with exciting drama. When we start out the comic, we meet Periwinkle as a little kid, looking up to her big sister Hydrangea, who’s already the kind of Fairy Godmother that Periwinkle wants to become. The next chapter picks up several years later with Periwinkle trying to pass the Fairy Godmother test for her third year in a row. She’s grown up, but she’s still a smaller-than-average cutie who’s never going to give up on her dreams. 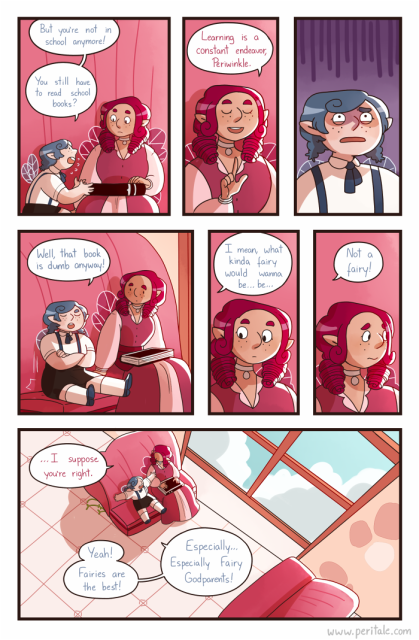 I’m just a huge fan of any universe where the creator has built a really cool and interesting system of magic and myth, and that’s definitely the case for Peritale. Costa takes the fairly simple and well-known concept of The Fairy Godmother and creates a whole backstory and world for it. There are rules and histories and things going on that we don’t even know about yet. There’s so much possibility for the future of this comic that I absolutely cannot wait to see where it goes.

I’m in love with Mari Costa’s art. Her character designs are so adorable and welcoming, and as a fat woman, I really appreciate that there are more than a few characters who are soft and round like me. Other than the adorable and plucky Periwinkle, we’ve met her older sister Hydrangea, her little sister Lettie, older brother Cedric and the non-binary fairy Lavender, as well as a host of others. They all have terrific looks and great hair. The art looks like a really colorful ice cream sundae with strawberry ice cream and whipped cream and sprinkles and a cherry. It’s just so fluffy and bright and it cheers you up right away. 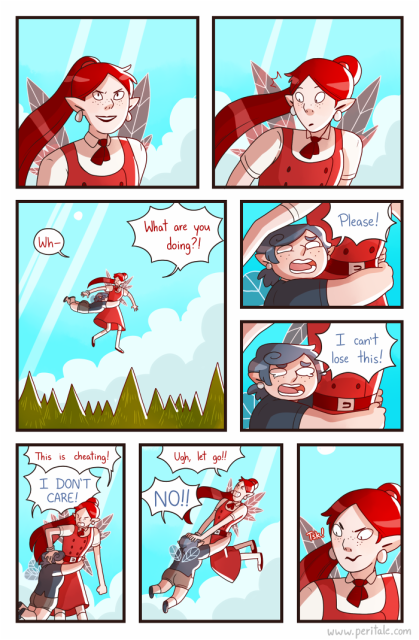 Check out that cameo from my favorite teenage witch!

Another thing I absolutely love about Peritale is its protagonist’s unending optimism. She knows that she has no magic, and therefore she should have no chance at becoming a Fairy Godmother, but she doesn’t let that stop her; she’s determined, and she’s determined to do so with a smile on her face. Even when she hits a major snag in her plan (she misses half a point on her Fairy Godmother Test), she’s still not going to let that get her down. She’s just a kid who’s got a great big heart and isn’t gonna let other fairies’ ideas of what she can or can’t do define her life. This is the kind of all-ages comic that makes me wish I had a daughter that I could read it with.

Peritale is far from Costa’s only really quality comic, though. I first found her work through the really wonderful ghost story “The Well by the House on the Hill,” which can be purchased as a softcover or ebook. After enjoying that comic, which has wrapped up, I devoured her other great comics like Super Mahou and Any Witch Way. I’d definitely recommend that you check out all of her comics and if you can, support Costa on Patreon. To keep up with Costa, you can also follow her on Twitter or on Tumblr.

In other news, did you hear about the Xena comic??? Everyone’s favorite Warrior Princess will be returning to life in an all new comic book from Dynamite coming out this April. The series will feature art by Ariel Medel, and very auspiciously, will be written by Genevieve Valentine. If you don’t recognize Valentine’s name, maybe you’ll recognize the last prominent heroine she wrote — Catwoman. Yes, Genevieve Valentine, the woman who just last year established Catwoman as a bisexual character, is now going to be writing Xena. We can only hope that this Xena comic has at least as much queer lady action as that series did. 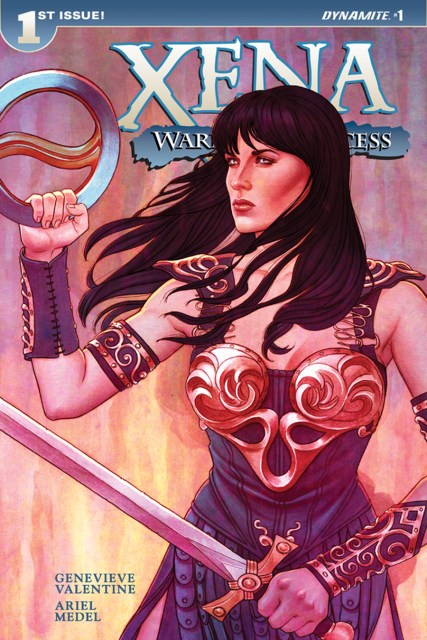 According to Bleeding Cool, this new series will focus on our heroes trying to stop Caesar from conquering the world. “Xena and Gabrielle scramble to stop him before they have to wage war against a man they once called a friend. But along the way, Xena will have to confront her past against a rogue band of women warriors, and Gabrielle, whose secret visions are becoming prophecy, will have to protect Xena – at any cost.” Sounds exciting (and hopefully gay)!