Long Red Hair by Meags Fitzgerald packs more emotional and educational punch in its less-than-a-hundred pages than many books three times its size. It jumps through time, telling the story of Fitzgerald’s growth and exploration of her own identity, sexuality and what it means for her to be a woman. I quickly fell in love with this book, even when it was destroying my emotions. I also feel like I learned more about vampire bats, real-life witch hunts and the history of celibacy than I ever could have expected I would from a graphic novel.

Although she now identifies as queer, when Fitzgerald was younger and realized that she was attracted to both boys and girls, she came out as bisexual, a process that takes up some substantial space in the book. Reading about how much she struggled to identify with the term bisexual is so devastating. She does a brilliantly excellent job at showing how society puts pressure on bisexual women to “pick a side” and either be gay or straight. Young Meags feels pressure from TV, her parents, lack of role models and even her own internalized sense of biphobia. When she comes out to her friend as a teen and tells her that she has crushes on girls, she tells her that she’s afraid of being bisexual because it means she won’t have a soulmate. That took all the air out of my lungs. 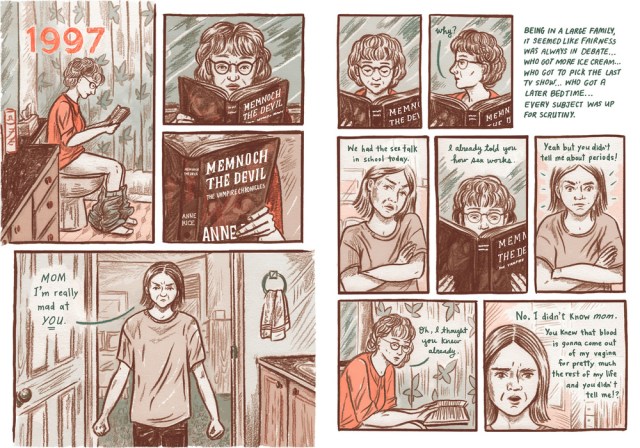 I also don’t think I’ve ever seen a comic that approaches the topic of celibacy like this one does. It’s a really interesting topic that barely ever gets talked about, and so to see Fitzgerald talk not only about the history of celibacy (she brings up the celibacy of Greek goddesses and Queen Elizabeth), but also her own personal choices about whether she wants to be in a sexual or romantic relationship or not. It’s really cool to see a woman talking so frankly about deciding to avoid traditional relationship models.

The third topic that Fitzgerald focuses on in Long Red Hair is imagination, make-believe and belief itself. Fitzgerald grew up in a family where Friday the 13th is a good luck day, where believing in angels is like believing in aliens (“they’re both kinda weird things that come from space,” she tells a friend) and where they spend quality family playing Dungeons and Dragons together. She talks about how, growing up, she loved playing dress up and games like Light as a Feather, Stiff as a Board and Bloody Mary. This exploration of belief adds another dimension to her discovery of who she is and challenges the reader to question the way they look at the world around them. 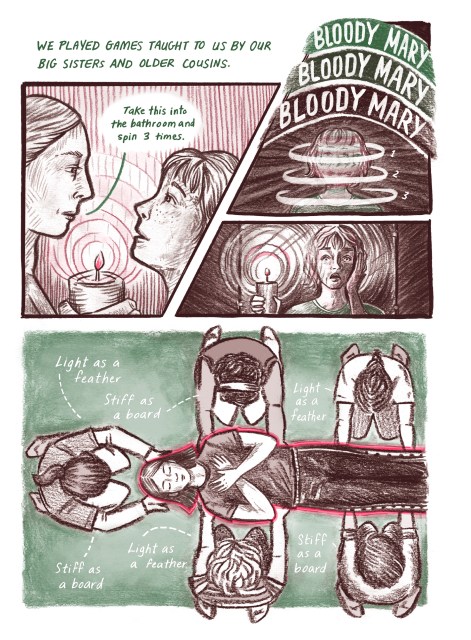 I really love this subsection of graphic memoirs where queer women discuss the complicated feelings and thoughts they dealt with growing up, and I’m so thankful for it. The more books we have like this, and the more diverse they get, the more young girls will be able to find themselves on the pages and maybe they won’t feel as confused or alone or frightened as these authors did. Long Red Hair does an excellent job of adding to this genre with its nuanced discussion of queerness, girlhood and swearing off romance.

Long Red Hair is a deeply fascinating and moving book, and at a brisk 93 pages, so it makes for the perfect read if you’re looking for something you can finish in one sitting. The writing is just gorgeous, and the art is so packed with emotion and nostalgia that you you feel like you’re swimming through Fitzgerald’s memories. She’s able to draw expressions on faces that let you know exactly how the characters are feeling and what they’re thinking. Fitzgerald is able to masterfully combine the personal with the intellectual in a way that few authors are. You can buy Long Red Hair online from places like Fitzgerald’s personal site and other booksellers, as well as book stores. 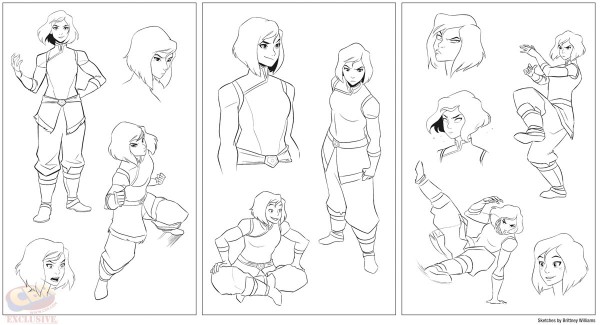 There was also a lot of other comic-related news recently that really got my attention, due in large part to the recent New York Comic Con. First of all, for all you comics podcast fans, there’s going to be a huge crossover event of nine of the biggest comics podcasts (including my favorite, Less than Live with Kate or Die) starting on October 29. For more information, you can check out the Secret Convergence on Infinite Podcasts tumblr. We’ve got some new, exciting information about the next volume of Kelly Sue DeConnick and Emma Rios’ terrifically brilliant series Pretty Deadly. According to DeConnick, the new issues will leap forward in time and feature a story where “the worlds of the mortals and the immortals are at odds.” Brittney Williams, the recently announced artist for the upcoming Patsy Walker AKA Hellcat series with writer Kate Leth, was also announced as the artist for the upcoming Legend of Korra comics, which will focus on Korra and Asami’s relationship! Williams is a terrific artist and I’m so excited to see her work on these books! This is great news!

In news that is the exact opposite of great, the Marvel Cinematic Universe doubled down on its commitment to showing its female fans that it really doesn’t care about them by pushing back the Captain Marvel movie for a second time, all the way to March of 2019. At the same time they proudly announced that the sequel to Ant-Man (yes, Ant-Man) will be coming out in July 2018 and will be called Ant-Man and The Wasp. Marvel is touting this film as their first named after a female hero. Seriously, Marvel pushed back its only planned female solo film to a date eleven years after it’s first film (2008’s Iron Man) and then gave The Wasp, a founding Avenger, second billing in the sequel to one of their worst movies and expected female fans to be happy about it. At least Captain Marvel is getting a Young Adult novel I guess.

You are a Kitten! Pick-a-Plot Vol. 3 (Conundrum)

Jem and the Holograms #8 (IDW)