Every year on Hourly Comics Day we get some truly wonderful journal comics from some of the best artists and cartoonists on the web. It’s a great way to learn more about the artists you love and also to get to see what their art looks like when they’re being casual and just having fun. Some of these comics are funny, some are sad, and some are just nice looks into some of our favorite artists lives, but all of them are worth looking at. 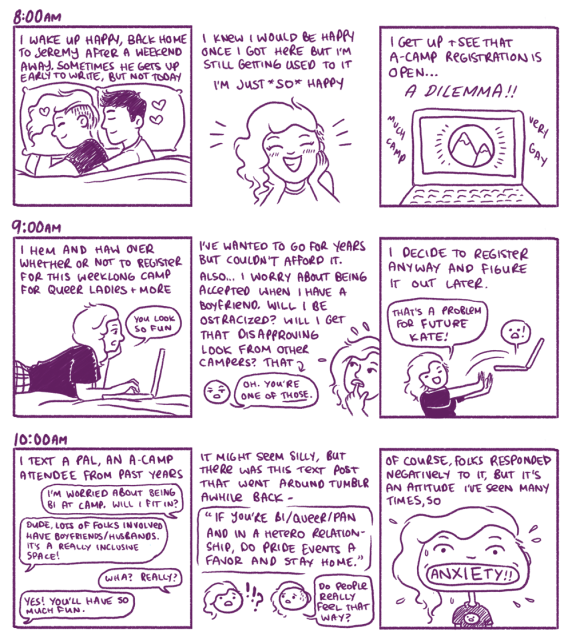 Some people, like Molly Ostertag and Kate Leth got deep and emotional and really bared their souls, talking about things they’re struggling with and trying to get through. Ostertag’s day involved sexy dreams, staring contests with cats, Mad Max Fury Road and struggles with negative thoughts. Leth talked about Skyrim, being Canadian, anxiety and identity problems. Oh yeah, and also A-Camp. Which, by the way, if you’re like Kate and you’re worried that you won’t be accepted and embraced at A-Camp because you’re bisexual or queer and in a relationship with a man, don’t worry, you’ll totally fit in! Leth and Ostertag both showed one of the best parts of Hourly Comics Day: that it lets fans get to know their favorite artists a little bit better while letting the artist decide how much they want to talk about. 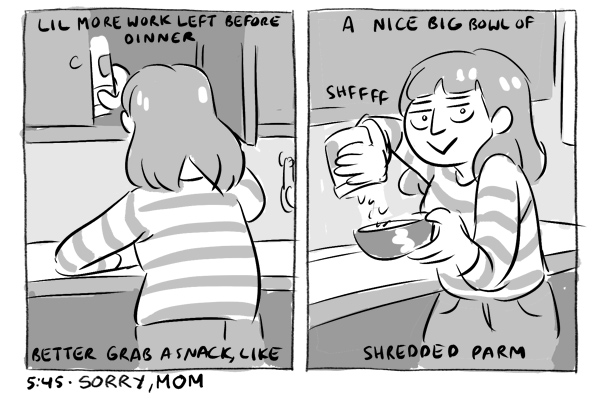 Others took a lighter route. Carey Pietsch, for example, drew wonderful comics about relatable things like the creative way she dries her hair, her stinky monitor glove, killing houseplants and eating an entire bowl of shredded cheese. While Pietsch was busy eating cheese, Maddi Gonzalez ate ten meatballs, a tub of ice cream and two corndogs and then complained about being sick (I love you Maddi, thanks for the twitter header). Meanwhile, Aliza Layne talked about erotica, the Moomin app and having a very wet cat sit in her lap. All of these comics are great. 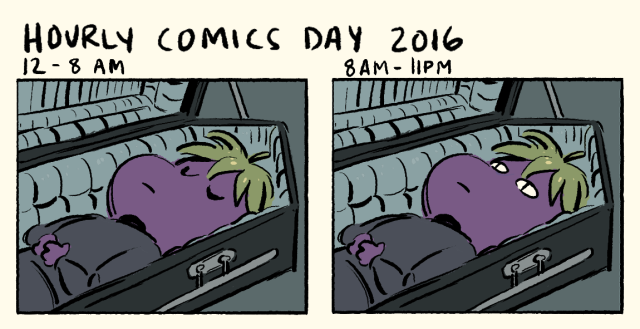 A trend that I noticed this year was artists saying things like “I do less every year” and only doing a small portion of the day. However, a lot of these ended up being some of my favorites. Taylor Robin quit after 1 pm, saying “i changed my mind i hate this.” Amanda Scurti lasted a little bit longer, documenting her attempts at doing makeup and eating lunch until 2 pm. Melanie Gillman skipped some hours throughout the day, but still put up super great (and super relatable) comics about having thighs so powerful you wear out your leggings and not getting jokes that straight people tell. Finally, Ariel Ries absolutely killed her entry with two simple but hilarious drawings that were enough to cover the whole day.

Aatmaja Pandya maybe won the whole day with her single drawing entry for 8 pm-9 pm, a simple drawing of herself with her hands covering her face and the caption “I told Cathi about Transformers sex.” Poignant, profound and succinct, it’s the ultimate Hourly Comics Day comic. 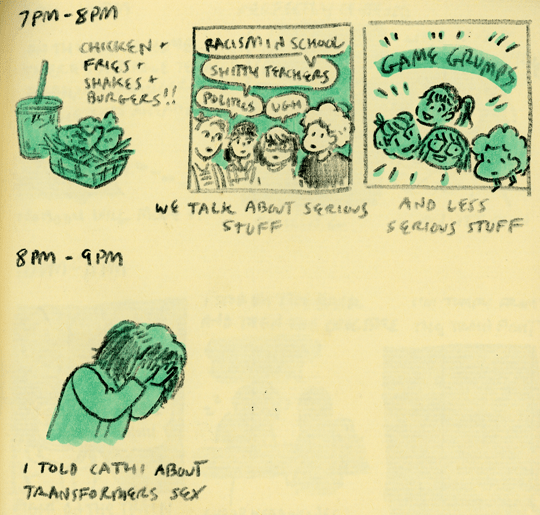 I also want to encourage you to check out a new comic from Boom! Studios, the same company that brings you Lumberjanes and published other great comics like Marceline Gone Adrift, Help Us! Great Warrior and Power Up, called Jonesy. Jonesy is a comic about a Latina high school girl (named Jonesy, natch) who’s full of two things: anti-high school establishment angst and the magical ability to make people fall in love. I also love that this book completely throws heteronormativity out the window. When Jonesy makes all the other students fall in love with one girl, Susan, we see both the boys and the girls flirting with her and asking her out. Not only that, but Susan doesn’t once protest “but I’m not gay” or “I’m not bisexual;” the comic just treats girls asking her out as a totally normal thing. This lack of heteronormativity and an abundance of characters of all different ethnicities makes this comic stand out. 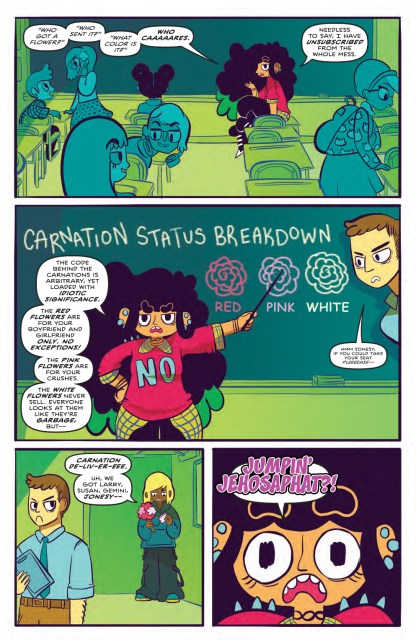 Jonesy is written by Sam Humphries, features art by Caitlyn Rose Boyle, colors by Mickey Quinn and letters by Corey Breen. The art in the book is super fun and cute and stylish. It looks fresh, bold and youthful. Quinn’s saturated and loud colors add to the youthful feeling to make sure you know that this is a comic that very much takes place in high school. This art, and Humphries’ sharp and funny writing really make Jonesy stand out as a character who you want to pay attention to. Jonesy is out in comic shops tomorrow.

X-Files Anthology Vol. 2 The Truth is Out There TPB (IDW)