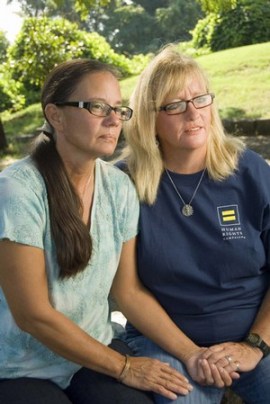 You may remember the incredibly tragic story of Carol Ann and Laura Stutte, whose house was burned to the ground with the word “QUEERS” spraypainted onto the side. At the time that story broke, we knew that they had been continually harassed by ‘a neighbor’ for months before the attack, but no more details about this neighbor (or maybe more accurately, suspect) were available at the time. The story developing now explainswhy: although the Stuttes believed they knew who had set their house on fire, they “scrupulously avoided naming names” and publicly stated several times that they hoped their arsonist would be able to someday get help. The couple haven’t been interested in conflict or punishing anyone; they only wanted to return to the peaceful life that should have been theirs all along. But now that their insurance company is refusing to pay them what they’re owed, support them at all while they are still completely debilitated by a fire that destroyed everything they owned, or pursue justice on their behalf, they are suing their neighbor, Janice Millsaps.

The trail of evidence to support their claims honestly couldn’t be stronger. The Stuttes reveal that Millsaps has, over the course of the time they lived at their former address:

+ threatened to poison their dogs a short time before one of their dogs died, apparently of poisoning

+ trespassed on their property, entered their home when they weren’t there, and watched them through their windows

+ repeatedly made directly threatening statements, including but not limited to “There’s bodies in these hills that no one will ever find,” and “Do you know what’s better than one dead queer? Two dead queers.”

Even after all this – and even though Millsaps is still living in the same house in the same neighborhood while they’ve been moving through a series of safe houses and temporary homes for the past 5 months – they Stuttes weren’t going to sue. The only reason they did was that their insurance company won’t pay for their living expenses, and has stopped returning their calls. Although they were initially put up in a safe house paid for by the insurance agency, they were cut loose after one week and told they had to find someplace to live on their own.

“We were so grateful,” says Carol Ann. “Then he called and said we had one week to find somewhere else to live or start paying it ourselves—and that place cost like $2,400 a month. I asked where we were supposed to go, and he said, ‘You have a house, you have land, go back there.’ I told him, ‘But the house is gone! And our neighbor is trying to kill us!’ and he told us we’d have to figure it out. I could not stop crying.”

The Stutte’s insurance policy clearly stated that, “If a loss covered under this section makes the residence premises uninhabitable, we cover any necessary increase in living expenses incurred by you so that your household can maintain its normal standard of living for up to 24 months.”

Everyone, from every possible walk of life, experiences trauma. Losing a home could happen to anyone, and does happen to people of all kinds. But when you experience trauma as a member of a marginalized or socially undesirable group – like a sex worker raped by a client, or a veteran of an unpopular war – there’s a second trauma, the damage that’s done by watching everyone around you, people who by all moral and ethical standards should be helping you, side with your abuser. No one deserves to have everything taken from them like these women have; no one deserves to still be waking up with nightmares five months later and afraid to say hello to any of your new neighbors because who knows, maybe they’ll decide to burn your house down too. But when this level of inaction is taken, when every possible authority and potential source of relief turns their back on you, they’re telling you that you did deserve it, and maybe worse.

There are two stories here.

The first was five months ago, and it was about a deeply disturbed person whose hatred of gay people had ballooned to dangerous proportions.

This story we’re reading about now is more complicated, and even scarier: a system that is so indifferent to violence against people that are queer, people who are poor or of color or trans or female or mentally ill or physically disabled, that it’s basically perpetrating it.

The Stutte’s story has a heartwarming ending; a local LGBT organization helped them find a rental property on the very day they were kicked out of their safe house, and people all over the country have sent them money and supplies (including a 50-pound bag of dog food shipped by UPS), coordinated mostly through queer organizations. But none of the aid that has helped them survive this long came from any of the organizations that profess to exist in order to provide it. It came from individual people, who were probably also struggling to get by but couldn’t watch someone else in such pain without doing something about it. That is, in a word, totally unacceptable. The Stuttes must have paid hundreds of thousands of dollars to their insurance company, which now will not return their calls.

The case against Ms. Millsaps is ambitious; they’re suing for $292,688.82 for trespassing and depriving them of personal property, and a total of $880,000, which includes damages for intentional infliction of emotional distress and malicious harassment. But it’s a lot more likely to turn out in their favor than trying to reform the system that’s willing to take everything away from them a second time. America’s not ready for that case yet; maybe the best we can hope for is that it will be while the Stuttes are still here to see it.