Do you know how much time I spend thinking about the next great RPG that doesn’t exist yet? How disappointed I am every year at E3 that a new Dragon Age or Elder Scrolls isn’t announced? All I ever want is a big map to wander around on, running errands for strangers and getting into fights with strangers and taking treasure from the dead bodies of strangers. Well I feel very dumb, because West of Loathing has been out for almost an entire year and I have been stumbling around the internet complaining that there are no good new RPGs for that entire time, and it turns out to be one of the best RPGs I have ever played. 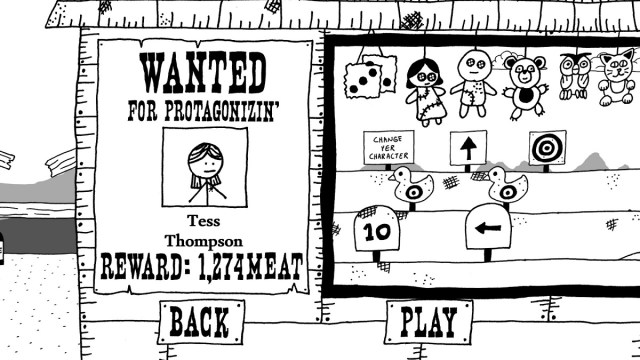 The game randomly generated this name for me, for the record.

The thing that made me keep delaying picking this game up is the same as the thing that made it look interesting to me in the first place — the art style. It’s stick figures. It looked cool enough to catch my eye but too silly to be a Serious Video game. And it’s not a serious video game exactly, it’s a very silly video game, but the mechanics are serious and intuitive and the game works so smoothly that it honestly puts most serious games to shame.

But I’m getting ahead of myself. What is the game about? That’s a good place to start. The plot is very simply to go west and explore. You’re a bored farm-person looking to broaden your horizons, so you set out on that dusty trail to make your name or your fortune or just get out of your parents’ house. And then you meet people and you talk to them and, in classic RPG fashion, they all need errands and favors done, so they send you to retrieve a bracelet from a mine or a rifle from a ranch overrun by demon cows or a bowl of jelly beans from a forgetful hippie. And along the way you run into more people, and more locations show up on your map, and you fight and loot and pick locks and crack safes and hornswaggle goblins. It’s a game of near-endless sidequests. But unlike most RPGs, the main quest (Clear a path for the westward railroad) is just an excuse you get you into the map. The sidequests are where the lore of the game is revealed, and they also serve to paint a world filled with likeable enough weirdos. Nothing feels generic in this game, despite the simple art design. All of the NPCs have big personalities. Every location has its own special something going on to set it apart from the rest. The world is just fun to explore. Flush every toilet, dig around in every spittoon. Adventure! 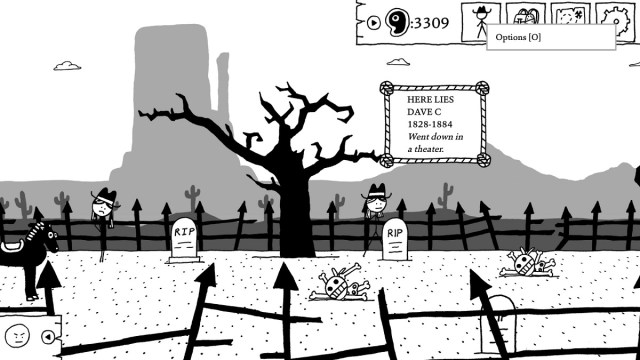 The writing is very silly. On purpose, I mean. I’m kind of a curmudgeon who usually doesn’t like things that are trying to be funny. I acknowledge that as a Me Problem. But I really liked the tone of this game. It’s jokey without being a joke, and it’s never mean. I unlocked a thing called “Stupid Walking” in the first scene and spent the whole game rolling and crawling and sliding around instead of walking, and never considering turning it off, because it was fun. On a macro level, the silliness is a send up of serious RPGs that are already pretty silly. People often complain about fetch quests in RPGs like “I’m the hero of the realm, why would I take the time to go find a bottle of wine you left in a cave ten years ago?” But in this game, you’re only really a hero (if you even are a hero) BECAUSE you do a lot of nice things for people. This guy needs glasses, this lady needs a bar of soap so she can take a bath before starting up her bakery business, these bandits died in a haunted pickle factory and need their souls put to rest by having all of their pickle-making work completed. I dig that. In real life I would find it very heroic if somebody would bring me an iced coffee and a breakfast sandwich when I really need one, for instance right now and also always, whereas I don’t really need anybody to sword fight for my honor or whatever. Maybe it’s my depression talking, but I think running errands is heroic. 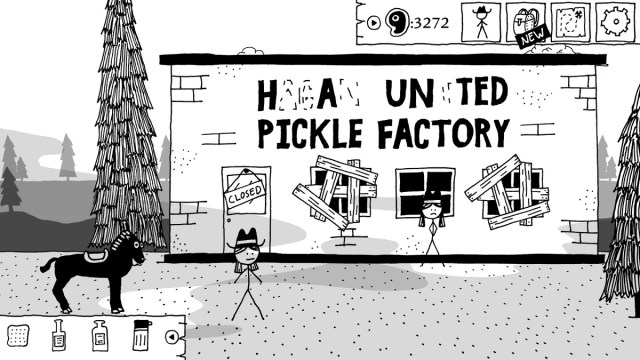 Mechanically, the game just works really well. The fights are a simple old school turn based RPG format. I relied on the same attack for most of the game, plus my pardner Susie’s lasso skill to stun enemies. Most fights are pretty easy, but something you’ll run into something that needs a little more thinking and a few consumables (poison bullets and dynamite, for instance), and maybe you need to put on a different hat to counter the enemy’s strengths. Fights go quickly, so they never feel like a chore no matter how many you have to do. Moving across the map is also quick and easy. Random encounter pop up almost every time you try to go somewhere, but those are usually funny or unlock new map locations, and they only take a couple seconds, so they add to rather than subtract from exploration. Everything feels good. The movement and the clicking and the dialogue and the fighting. I started playing this game before dinner just meaning to get a feel for it, and wound up forgetting dinner entirely and almost finishing the game in one sitting because the play loop is so satisfying. 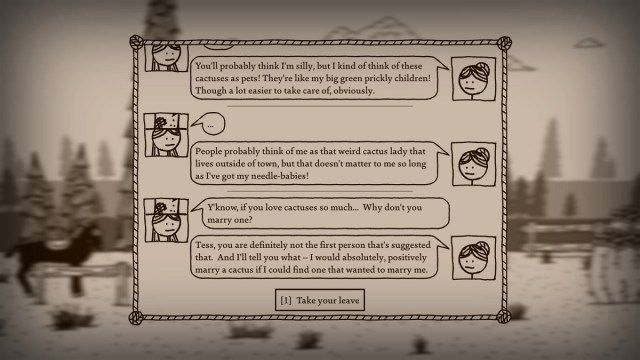 I never did find a cactus for her to marry. Love is a lie.

I finished my playthrough in about seven hours, but I think I left a decent amount of exploration on the table in the final map section (I did the final bit of the main quest without realizing it was the final bit.) But I definitely want to do another playthrough. I chose the Snake Oiler class, which is a shooty class, but I’d like to try out the melee and especially the magic class. I gave up on being a Necromancer because it hurt my shooting skill, but if I’m playing full mage why NOT raise the dead, right? I also didn’t finish a couple of the larger subquest arcs, and I want to see how those play out. There is a lot going on in this game world, and not all of it is silly! But I want to see all the rest of the silliness as well. It’s really good silliness. 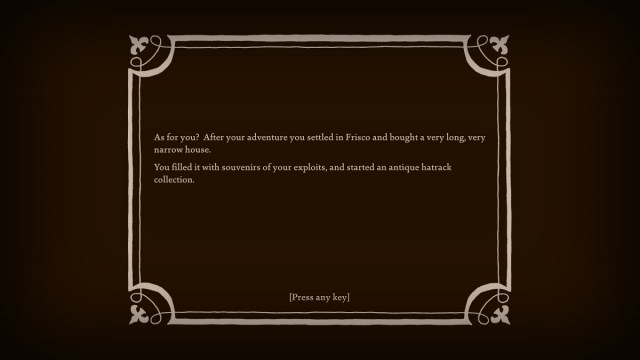 West of Loathing is available on Windows and Mac, as well as on the Nintendo Switch. I played it on my Windows laptop and it ran perfectly just using keyboard and trackpad. It’s $10.99 on Steam, and absolutely worth the money. I could not stop playing it. It is one of the most purely enjoyable game experiences I have had in years and I really cannot recommend it enough.