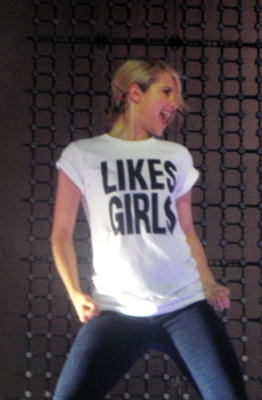 During the Toronto leg of the Glee tour on Saturday night, Diana Agron sent the hearts of a thousand tiny lesbians aflutter after switching out her “Luck Caboosey” t-shirt for one that says “Likes Girls.” Despite being the teasingest of teases, Diana is not actually a gay lady. She said so on tumblr.

“Yesterday, during our second show,  Instead of wearing my usual shirt during “Born This Way” I decided to wear one that said “Likes Girls”. It should actually have read, “Loves Girls”, because I do… No, I am not a lesbian, yet if I were, I hope that the people in my life could embrace it whole-heartedly.”

I know you like her hair, and she likes all the right things, and there are all those rumors but it turns out she’s just a rad straight girl after all. In her post, she discusses Glee’s reception and talks about how she wasn’t raised to accept prejudice.

It’s a fantastic show of suport but at the risk of looking a gift horse in the mouth, I’m going to go ahead and say that I’m a little torn on how I feel about the t-shirt deal. I’m all for LGBT visibility and support, but somehow claiming to be queer when you’re not feels like co-opting the struggle. Maybe I’m trying to intellectualize what is really the very teenage and very gay parts of me feeling cock-blocked when I find out a girl who “likes girls” doesn’t in fact like girls.

This picture is gay. Diana Agron is not.

You may now weep and/or opine.