I’ve been doing a lot of traveling lately. Does anyone know why airports always have suitcase stores? Call me over prepared, but if there’s one thing I usually bring to the airport, it’s a suitcase. I have yet to walk into the airport clutching a cumbersome pile of belongings in my hands, check-in, get past security, see the suitcase store and think, “Hey! One of those would really come in handy about now!”

I don’t understand them, but that doesn’t mean I don’t thoroughly enjoy them. For me, the suitcase store is the best part of being at the airport. I can easily whittle away 45 minutes checking out various bags’ compartments, imagining what I would put in those compartments, and singing Phil Collins lyrics in my head. I guess that last one isn’t strictly related to being in a suitcase store, but it’s still true.

Surely I’m not alone in this. You fetishize bags, right? And ones that are practical and sturdy and have lots of little hiding places make you feel, like, um, excited? And you get tiny involuntary spasms when you see concealable zipper pulls? And you agree that Phil Collins rocks? I feel so good if I just say the word. Su-su-sudio! Oh-oo-oo!

When I can justify buying a third black bag that’s remarkably similar to the two I already own, this is the one I’ll get. 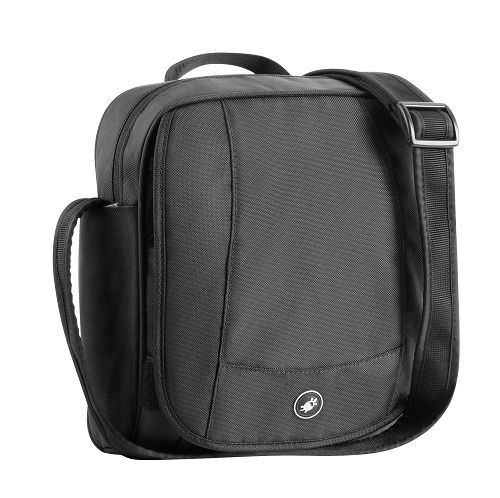 It’s even better in 3-D, where you can drool over the high-tensile stainless steel wire and internal slip pockets. Mmm, and what’s that, a pen holder? Yeah, yeah, that’s how I like it. Mmm, and a key clip? Yeah, you know me, you know I got keys that need some clippin’. Oh, and what’s that? Is that what they call a “snatchproof shoulder strap?” Shh, baby, shh. We don’t need words now. Shh.

The only thing that puts a damper on my airport experience is getting through security. Every time, it’s the same tedious routine: take out my computer, take off my belt, take off my shoes, have a brief panic attack over whether or not there are any drugs in my pockets, remember that I don’t do drugs. Security simultaneously bores me and puts me on edge, like an episode of Hoarders.

Recently, when I went through LAX, I was confronted with the backscatter body scan machine for the first time. What they want you to do is stand between two huge blue boxes so something known as “ionizing radiation” can take this sort of picture: 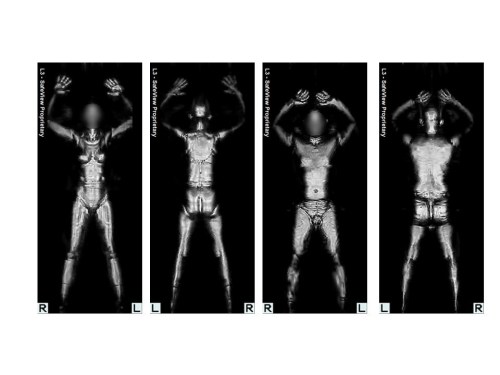 While I do appreciate the booty-shaking dance position they ask one to adopt (Do the Backscatter, girl!), something about it just doesn’t feel quite right to me. Sure, various government agencies say there’s no known health risk to exposure to ionizing radiation, but we’ve been lied to for years about stuff that wasn’t supposed to be harmful, whether it’s cigarette smoke or lead paint or Katy Perry. I’m trusting my gut on this one. While I’m not totally sure what “ionizing radiation” means, it definitely has the rhythm and syllable count of something carcinogenic, just like Katy Perry’s lyric, “Once you party with uh-us, you’ll be falling in luh-ove.” I can’t prove it, but I’m pretty sure every time I’m exposed to “California Gurls,” a full minute is shaved off my life span.

The whole backscatter body scan is also pretty invasive. I mean, for other people. I actually wouldn’t mind some stranger at airport security peeping my goods. I’m not extroverted enough to whip off my shirt in public, but I do secretly wish I had more occasions to do so. The fact of the matter is, I have amazing breasts. I do. And they don’t often get the appreciation, recognition or gentle fondling they deserve. Usually, I regard them with indifference at best, because they can make it difficult for me to fit properly into the button-up, man-style shirts I so enjoy. And a lot of times, I would prefer my tie to hang totally and completely straight down, and not do that weird little bump thing that happens when girls with breasts wear ties. Much like a tender baby lamb, I have been both blessed and cursed with a great rack. And also like a tender baby lamb, my rack is delicious when slathered in some barbeque sauce.

(Yes, I realize this is the second time here at Autostraddle that I’ve alluded to myself without a shirt on. No, I don’t know what this means about the inner workings of my sexual psyche. And no, I am not completely certain that the phrase “sexual psyche” even means anything. And yes, I was serious about loving Phil Collins. And no, I don’t care if that makes me uncool. And yes, I am lying about not caring if it makes me uncool. And no, I don’t think this rhetorical device has run its course. And yes, I am doing one last one. There.)

Basically, for various reasons, I don’t think TSA is ready for this jelly. So, I opted for the pat-down, which is the only way out of the body scan. And you know what a little Google research taught me? Apparently only 21% of Americans opt for the pat-down. Twenty-one percent. That puts me in the same percentage of Americans who believe in witches or who don’t use the internet. You know what there’s more of than me, in my measly 21%? Americans who believe God created humans less than 10,000 years ago! There’s 40% of those. Yup, America is chock-full of people who believe Jesus rode a T-Rex and who want to put on strip shows for government machines. Oh, America. You so crazy!

More folks should go for the pat-down, in my opinion. It’s a girl, in uniform, who wants to put her hands on you. (I rest my case.) Actually, she’s getting paid to put her hands on you. And before she does, she says things like, “Now I’m going to run my hands along the outside of your body,” or “Now I’m just going to swipe this area.” It’s like she’s asking permission, which is hot in a communication and consent kinda way, but it’s also like she doesn’t care if she has your permission, which is hot in a sexual-fantasies-of-the-dominant-TSA-chick kinda way. I like to think of it as less of a “pat-down” and more of a “free mini-massage.” Thank you, T&A! I mean, TSA.

This is what it’s like, but sexier (at least in my head). 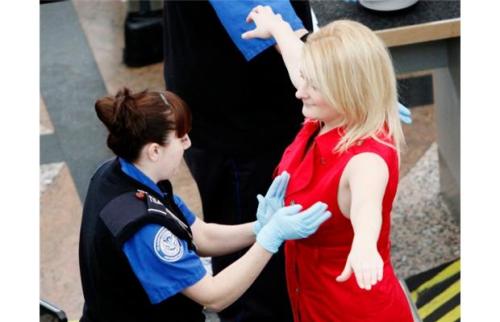 And you know what was going through my head the whole time the uniformed girl was oh-so-professionally patting me down? This little lyric, a la Phil Collins: “Now she don’t even know my name, but I think she likes me just the same…Su-su-sudio! Oh-oo-oo!” The TSA can force me to get a pat-down, but it’s my choice whether or not to enjoy it. In fact, the only way my time at the airport could have been sexier would be if I had a bag with concealable zipper pulls and a snatchproof shoulder strap. Aww yeah.