Its certainly been one hell of a week for DC’s PR team. (Emphasis on hell.) As Mey reported earlier, the two lead writers on Batwoman walked out last Thursday after higher-ups prohibited a lesbian wedding between main character Kate Kane and her fiancé Maggie Sawyer. After mainstream media picked up the story for its apparent anti-gay marriage overtones, DC faced strong public backlash, even facing threats of violence. Now, in what can only be read as a Hail Mary attempt at appeasement, the company has hired openly gay writer Marc Andreyko to lead the Batwoman creative team. 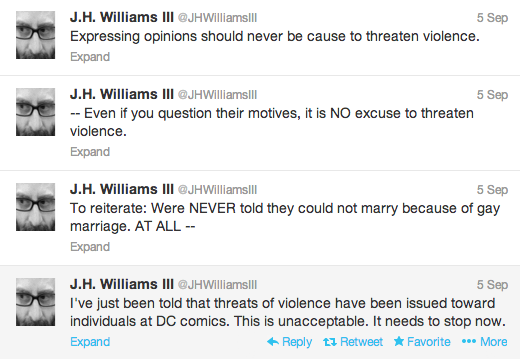 J.H. Williams III and Haden Blackman, now former writers for Batwoman, both condemned the threats of violence levied at DC after news broke of their departure (via @JHWilliamsIII)

For the record, Andreyko is well qualified writer for the position beyond his queer street cred. From his work on Manhunter (another comic series starring a woman named Kate!), Andreyko has demonstrated his ability to write compelling, multidimensional heroines with large supporting casts. He has already written for character Cameron Chase (an investigator with a deep-seated hatred of superbeings), in a dynamic similar to that shown in Batwoman. He has even written for Gotham before, shifting the setting of the Manhunter from real world Los Angeles to the troubled fictional city as the series progressed. Still, the timing of his prominent hire seems to be a fairly obvious PR move to address (or distract from) DC’s recent issues.

Aside from the Batwoman plot twist, DC has also been under fire for its treatment of Harley Quinn (general agent of chaos and sometime love interest of the Joker). Just when the outrage over the reboot costume debacle had finally died down, DC issued a contest asking artistic contributor hopefuls to draw Quinn naked, committing suicide. As as Callie Beusman wrote at io9, “What’s perhaps most disturbing about this contest — other than the way in which it showcases DC’s blatant disregard for women — is that it essentially prohibits comic artists who are opposed to the eroticization of violence against women from applying for the honor of drawing a strong female character.”

Are we really going to believe that things are peachy keen at DC now that they have a gay man leading some of the writing? (Is anyone else thinking of that Ryan Murphy led trainwreck we call Glee?) 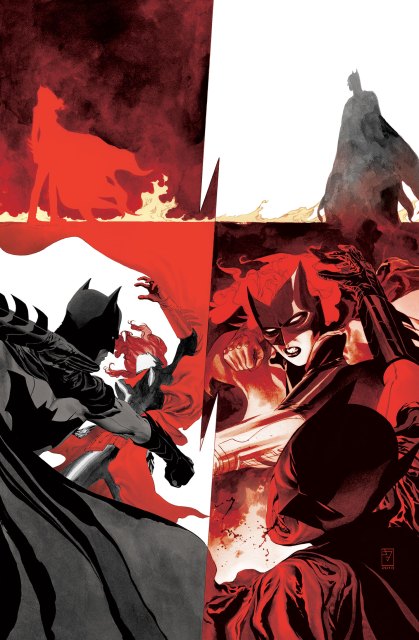 Batwoman 24, Williams and Blackman’s last issue: “The battle between Batwoman and Batman begins here—it’s all been leading to this!” (via DC Comics)

As announced at the DC Nation panel at Baltimore Comic-Con, Andreyko’s run begins with issue 25. This is two issues earlier than previously expected, cutting short the story arc the previous writers had promised would “leave a lasting impression.” Andreyko’s first issue is expected in November.