“We have all seen this happen before, haven’t we? There’s always some dumb drunk girl getting angry at some crazy bitch for doing something inappropriate.“: Carly’s Tuesday Televisionary!

Many of you stand before me. One of you is going to read our Kim Stolz interview and look at Robin’s beautiful photos of Kim Stolz. The other one is also going to read it. Also you’re all going to London! WhooO!

Also! Check it out, all of Autostraddle’s vids are on One More Lesbian: all the world’s lesbian, film, television and video content on one site. Their like-minded mission: “We want any woman or girl anywhere in the world who seeks representation and affirmation, to land on OML and find it here.”

For example, I just found this – “International Day of Femslash: I’m Your Man, a celebration of film clichès” — and I feel very affirmatitated (You name it, it’s in there. Gia? Check. Saving Face? Tipping the Velvet? Imagine Me & You? Alias? Katherine Hepburn? Buffy? Battlestar? D.E.B.S.? Girl Interrupted? Tibette? Rent? EVERYTHING! I just made your day you can stop now!):

GAY: Equal Right to Kiss? Why You May Be Disgusted by Gay Behavior without Knowing It: “Gay-friendly” people unconsciously feel that two men kissing in public is morally wrong. (@scientific american)

GLEE: According to Entertainment Weekly, rapper Eve will play “a no-nonsense girls’ choir director from a rival school” in two episodes of GLEE, which officially premieres in the fall. (@access hollywood)

GAY: Most teens (75 percent) support gay marriage, according to a recent survey by Pangea Media.

NEWSFLASH: Gays and Lesbians Love Social Networks! [Intern Lola: If you are reading this website, you already know this. (If you’re reading this website, you’re also totally hott and we love you.)]  According to a May 2009 Harris Interactive poll, gay and lesbian Internet users were more likely to be social network members than straights—55% of them were on Facebook, versus 46% of heterosexuals, and the differences were similar for MySpace and LinkedIn, too. (@finance) 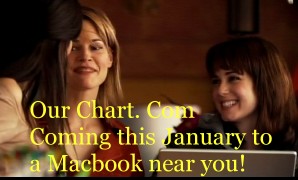 GAY: A group of current and former Mormons at odds with the church’s position on gay marriage and its political activism to ban it has launched a Web site asking the faith to soften its stance. The site includes a petition for reconciliation that calls on leaders of The Church of Jesus Christ of Latter-day Saints to end what it says are hurtful anti-gay policies and its involvement in anti-gay politics and fundraising.

THEATER: “There were twice as many male playwrights as female ones, and that the men tended to be more prolific, turning out more plays … These results are driven exclusively by the responses of female artistic directors and literary managers,” Ms. Sands said.”Men rate men and women playwrights exactly the same.” (@nytimes)

GAY: Same-Sex–Marriage Follies: “We’re not going to spend hours debating an issue that, you know, is not going to be of consequence.”

RACHEL: Rachel Maddow, the New Sexy: “If there’s a new butch poster girl, it’s got to be MSNBC anchor, Maddow. A bona fide butch sex symbol, desired by lesbians, straight women, and men, Maddow describes herself as “a big lesbian who looks like a man. I’m not Anchorbabe, and I’m never going to be. My goal is to do the physical appearance stuff in such a way that it is not comment-worthy.” (@villagevoice)

GAYS IN SCHOOL: It started when he came out as gay in seventh grade. He once found a magazine photo depicting gay sex taped to his locker. He reported that incident and others, he said: Bullying bill passes in tight vote. (Charlotte Advisor)

LOHAN: Lindsay Lohan to ‘help people’ on new reality show! “Lindsay Lohan is in talks to star in a new reality TV show where she would give advice to people who need a second chance in life.” For example Lindsay Lohan herself, w/r/t Samantha Ronson! Get back together now! (@news.com.au)

I SAW THIS GIRL: I saw this girl in Interview Magazine and I thought she looked interesting if you know what I mean and it said in the article that she is going to be famous, but right now she lives in Williamsburg or something, her name is ‘Nathalie Love’: 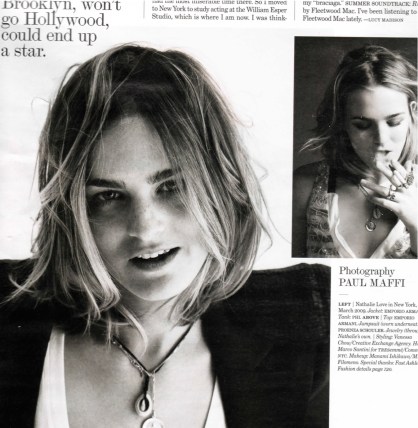 We Want to Love Nathalie Love

ELLEN & PORTIA: Ellen DeGeneres & Portia De Rossi ‘Happily Married Without Children‘: “We have animals, and we love them. And, you know, we are brand new aunts. Her brother and his wife just had a baby girl who’s a month old now, and it’s fun to be a part of that.” (@people)

Based out of New York, 410 BC is a lesbian-owned indie clothing brand offering high-quality, design-driven sweatshop-free clothing & goods released in limited quantities. Bands that wear 410 BC include Autostraddle favorites Uh Huh Her, Tegan & Sara and M.I.A. 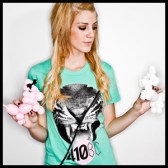 A lifestyle brand that combines art, fashion, music and conscious consumerism, 410 BC works with artists to showcase & promote talented individuals of our generation and give back to the community. For example, three of you have an opportunity to win some of their smokin’ hot apparel — one package including (1) 410BC T-shirt and (1) 410BC hat and Two packs including (2) 410BC T-shirts each.
Speaking from Riese & A;ex’s personal experience; even if you’ve only got one 410bc shirt in your drawer it’s possible you’ll wear it 4/7 days a week ’cause even on day three it’s still hotter than everything else you own. Also, they secretly have started a really cool blog about design, music, art, etc. 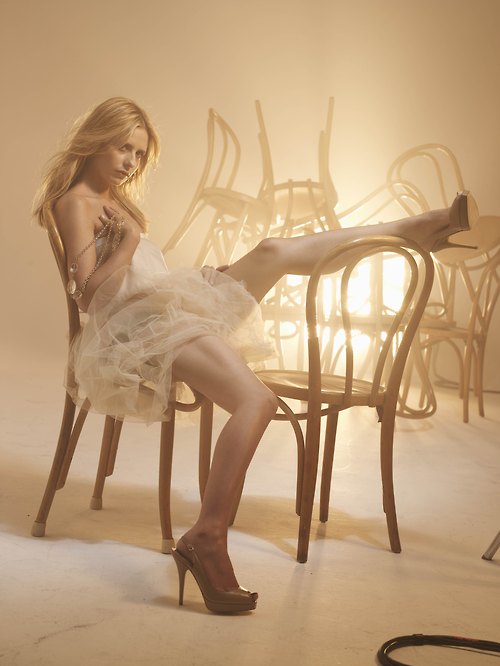 from Riese: Sociological and cultural based photojournalism like this will change the world, and has: Check out EPF finalist Carl Kiilsgarrd’s “The White Family“: The 2000 census found that nearly 23 percent of families living in Letcher County, Ky., fell below the poverty line. The median household income in most counties is at or below $25,000, with individuals making on average $12,000 a year. For more than three years I have documented rural poverty in eastern Kentucky through the eyes of the White family.

from Carly:
If there’s one thing I love it’s a janky workaround for a stupid problem. Want to get a better iPhone camera without buying the new iPhone 3G S? Get the Griffin Clarifi case. The case has a built in lens that slides into place over the preexisting camera lens to make it much sharper and able to shoot closeups. And at $31 it’s far more economical than upgrading your phone. (@coolhunting)

from Stef:
Dinosaurs are always funny, but especially funny when instead of attacking people, they’re just trying to say HEYYYYYY! I have now watched this video about a thousand times, and it now rivals keyboard cat in terms of guaranteed LOL. Oh hey!