You there, American reader! Close your eyes and imagine that you could go back in time and stop the voter referendum that led to Proposition 8 from even happening. Are you doing it? Congratulations, you’re in Costa Rica.

Yesterday the top court of Costa Rica blocked a proposed voter referendum that would have let voters decide whether civil unions should be available for same-sex couples. The reasoning behind this ruling? It would put a politically weak minority population at an unfair disadvantage in a largely Roman Catholic country, and also civil unions are “a legislative issue, and not an electoral one.” Bam. That’s it. We’re done here. (@yahoonews) 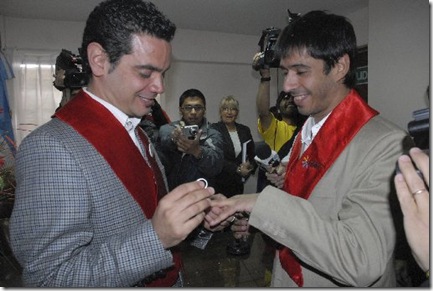 This is kind of an incredible thing! In contrast to the United States — where some provisions for civil unions/domestic partnerships/gay marriage exist, but we’re reminded CONSTANTLY that we are granted these things grudgingly — Costa Rica (and several other countries! Holler, Iceland!) are saying that really, the religious or “moral” implications of same-sex coupling are pretty beside the point. At the very least, they shouldn’t enter into the legal validation of a relationship. Furthermore, they are sending the message that being in the religious or cultural majority isn’t the same thing as being right, and no one group should be allowed to make rules about how another group lives, even if there are more of them.

Costa Rica, like many Latin American countries, is heavily Roman Catholic and religious. According to Wikipedia, 70.5% of Costa Ricans are Roman Catholic, and only 11.3% identify as having no religion, compared to 23.9% and 16.2% respectively in the U.S. It’s not a case of religion not being an issue; it’s a case of the government deciding that religion isn’t a basis for legislation. Imagine that! Imagine taking as your directive the idea that a religious majority shouldn’t be allowed to regulate the behavior of minority groups, and then making legislative decisons based upon it! I don’t know about you, but I’m a little dizzy.