Anti-gay group and general all-around haters, The Florida Family Association (FFA) is spending thousands and thousands of dollars to “warn” Disney patrons about Gay Days at Disney World. During Gay Day at Magic Kingdom, celebrated the first Saturday in June, LGBT singles, couples and families meet at the Magic Kingdom in red shirts to enjoy a gay ol’ time in the most magical place on earth. Though Gay Day is not officially recognized by Disney Parks, Gay Days organizers set up a huge Wednesday-Thursday event. Additionally, Disney works with private promoters for ticketed, after hour parties, such as RipTide at Typhoon Lagoon or Drink Around the World at Epcot. FFA is highly concerned that the gays will converge on unsuspecting families forcing them to watch “same-sex couples holding hands, hugging, kissing and wearing tee-shirts.” This of course is in stark contrast to what one normally finds at Disney World– all sorts of folks hugging, kissing and wearing ridiculous costumes. Thus, FFA has decided to run an airplane message across Magic Kingdom on June 1st and June 2nd (Gay Day).

Now, let’s get one thing clear, I love Disney World. Love it. Yes, it’s hot and crowded, filled with screaming kids and a total promotion of capitalism, but I don’t care and I love it. And I don’t want any hate filled haters spewing hate onto the least hateful place in the world. Regardless, FFA already managed to raise $4,100 towards their Gay Days warning. That’ll buy the group 10 hours of airtime, but the FFA is attempting to double that for a full 20 hours of flying hate.

From the FFA’s site:

LGBT (lesbian, gay, bi-sexual, transgender) activists converge on the Magic Kingdom the first Saturday of every June for an event called Gay Day at Disney…Our team has estimated in several years past years that as many as ten thousand (10,000) people entered the Magic Kingdom only to promptly exit before 1:00 pm after witnessing Gay Day patrons. One Gay Day patron’s comments best describes their goal “We need to be seen in the heart of America’s playground.” It appears from the behavior of Gay Day patrons that they were more intent on being seen rather than seeing Disney World. Just like activists’ attempts to gain access to youthful minds through LGBT characters in video games they also want to impact a captured audience of tens of thousands of children during the first Saturday of Summer Break. 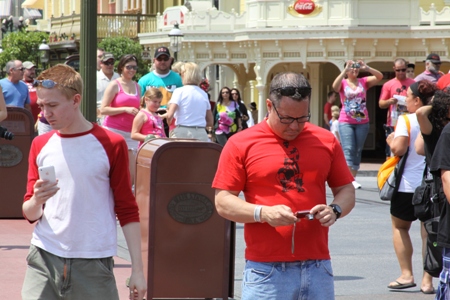 FFA claims that the strategic gayness of gay people has decreased Magic Kingdom attendance by “mainstream families” by 50-60% last Gay Day. Though FFA’s numbers are unsubstantiated, those within the LGBT community agree that the park was not particularly busy in 2011. By contrast, in 2000 Disney was forced to close the Magic Kingdom gates on Gay Day due to attendance north of 80,000. I don’t doubt there are families who avoid Gay Days for homophobic reasons, but if there was indeed a decrease in families at the Magic Kingdom, I wonder if it’s actually in relation to those numbers. Why bring your child to Disney on a seemingly random day in June when you hear it will be outrageously busy? 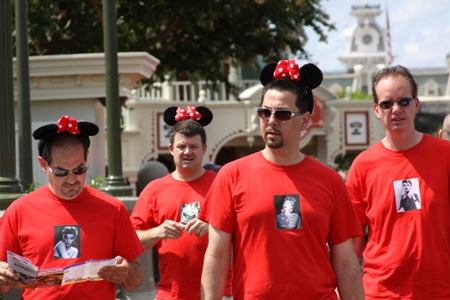 ANOTHER IMAGE FROM FFA OF IMMORAL BEHAVIOR TO KEEP KIDS SAFE FROM.

Last year’s decrease in attendance may also have to do with LGBT participants. While party promoters capitalize on the rising numbers at Gay Days, Disney remains neutral as ever. Last year drew around 150,000 people overall, yet without marketing specifically to the LGBT community, Disney seems unable to draw folks away from parties and into the parks. Said GayDayS.com’s Chris Manley, “Back in the beginning, the Magic Kingdom was the only identified event. People who’ve been there, done that may prefer to pass, or to take in some of the other events.”

Regardless of attendance numbers, one thing is for certain: some sort of message will be overhead warning folks against the presence of gays. FFA insists they are running the banner to protect families and children, but I’m worried about a different group of families and children. The ones who can’t even spend a day at Disney with families like their own without being reminded that some don’t want them there. 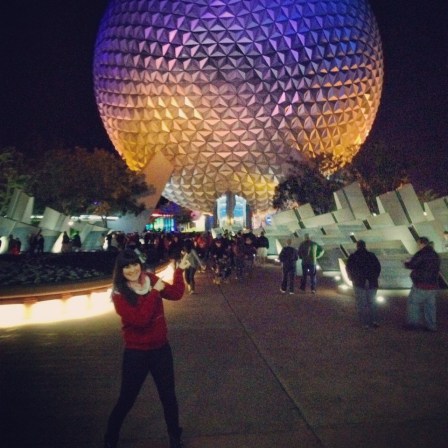