The day after President Trump signed the executive order that targets and attempts to bar U.S. entrance to Muslims from seven Middle Eastern and North African countries, I taught the story of Ruth to my 7th grade Sunday School class. In the story, Ruth’s husband dies, and rather than stay in her homeland she follows her mother-in-law Naomi back to Judah and becomes a foreigner, an immigrant, an outsider.

I planned the lesson as news of airport detentions came across my social media feeds. Call it destiny or irony, but I appreciated the opportunity to teach a lesson about an immigrant who forms part of the ancestral line of Jesus of Nazareth to a group of 12-year-olds while a runaway president literally kept families apart.

@wadetheory at the #nobannowall protest at LAX.

During our weekly check-in to start off the class, my students asked questions about the immigration order. They wanted to understand what was happening at D/FW airport and why. I did my best to explain, trying to find simple words that would clarify the xenophobic executive order and provide some insight into what the crisis meant for us as Christians. In the end, Ruth did the heavy lifting for me.

The word in the original Hebrew that is used to describe Ruth’s attachment to Naomi translates roughly to clave or clung, as in “Ruth clung to her.” The original text uses that same word to describe the attachment between Adam and Eve. For that reason, along with other subtext, some scholars interpret the story of Ruth and Naomi as a queer story.

Ruth’s speech to Naomi when she refuses to stay in Moab (“Where you go I will go, and your people will be my people, and your God will be my God”) is used frequently in weddings, straight and gay alike. Even if they were not lovers, I think the word queer is big enough to encompass the love between two women who became a family that no borders, financial circumstances, or social norms could separate. Once they arrived in Judah, strangers showed Ruth incredible kindness, giving her access to food and security for herself and Naomi. Eventually she married Boaz, a landowner, defying one more social convention as an Israelite brought her into the family lineage.

This story about two women who risked so much is situated in the Old Testament, smack in the middle of a whole bunch of really violent stories, but I never knew a vengeful God. I read about God’s wrath in the story of Noah and understood that God blessed Samson with the strength to kill an army with a donkey’s jawbone. I memorized those stories, but I never felt any kind of relationship with that God. It was always the Beatitudes, the parables about the relationship between God and the poor, and the quietest Psalms that made me seek the Holy Spirit’s movement in my life.

The theological commentaries of racists, the “statements of welcome” from conversion therapy advocates, and the sermons of Prosperity Gospel pastors have always struck me as ironic and ugly, profoundly disconnected from anything I felt as faith.

Yet here we are: In 2017, the presidency of Donald Trump — and the vice presidency of Mike Pence — has validated the fantasies of the Evangelical right and installed fundamentalist Christians into crucial federal offices. The Christians currently most empowered are a byproduct of the Moral Majority, an organization founded by Jerry Falwell Sr. in 1979 to form politically beneficial relationships between conservative Christians and the Republican Party. The Moral Majority began in the South in the same fertile soil that made Barry Goldwater and Richard Nixon’s Southern Strategy so successful in the late ’60s and early ’70s. Appealing to racial resentment during the height of the Civil Rights era, the Republican party “became vehicle of white supremacy in the South” and under the leadership of Falwell and Focus on the Family founder James Dobson, that racism became inextricably tied with the Southern Baptist church (and other similar white Evangelical Christian churches). It was always only a short step from scapegoating Black people to scapegoating Muslims, Latinx immigrants, gay people, and trans people. 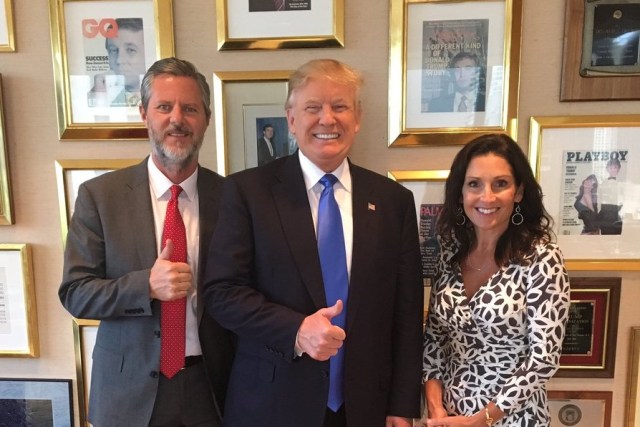 Trump cheesing aggressively with Jerry Falwell Jr. and his wife, Becki. Jerry is one of THOSE Falwells, president of Liberty University, and now the leader of a task force on higher education.

I have written about my faith a couple of times on Autostraddle, but I’ve always shied away from making too much of a fuss about it. I understand that so many people in our gorgeous queer community have experienced profound harm at the hands of churches. Being a Christian positions me within a privileged majority, even if many of my fellow Christians don’t believe I belong there. I didn’t want to get my Jesus feelings all over everybody’s political education and vapid fluff.

Times change. Right-wing Christians have weaponized theology against queer and trans people — and just about everyone who doesn’t experience the world exactly as they do. As they breathe more fire into our public discourse and gain more power in our federal government, as Religious Freedom acts of various permutations begin to strip hard-won rights of queer and trans people across the U.S., and as homophobic and racist Christians dominate more of the national discourse, the Gospel has begun to feel urgent. Progressive people engaging with it must make ourselves known.

The Bible is a big flawed book (66 books, actually) and I have never been able to stop reading it, no matter how much I tried. It forms the foundation of how I understand my relationship to the earth, other people, and all the questions I don’t have answers to. Those of us who are Christians have a responsibility to interrogate and push back against exclusionary theologies and politics.

My church is an affluent, predominately white, Presbyterian Church (U.S.A.) congregation in an affluent, predominately white part of Dallas. Like most Mainline Protestant churches in this decade, it is making strides toward LGBT inclusion and pursuing a more justice-centered theology, and it also carries a ton of baggage around race, money, sexuality, and power. It cherishes committees and processes, and it is home to many people who are genuinely trying to make positive impacts on the community and working to divest from the white privilege that has kept them isolated for so long. This happens slowly, and it is only possible when individuals step forward and share what they know. When I taught Ruth to my 7th grade class and framed it inside that weekend’s events, I refused to water down one of scripture’s richest stories. Instead, I hope I gave them the opportunity to examine the relevance of scripture for themselves and our community in that moment.

Religion is certainly relevant right now, but is faith? Can Christian teachings form a meaningful part of my activism? What are the possible theological justifications for all this evil bullshit brewing in Congress, and how do we dispel those? What does it mean to be a white queer Protestant working in solidarity with communities of color, trans women, and other communities who face the greatest threats from Trump and evangelical Christianity? These are some of the questions I’ll be exploring in this bi-weekly column.