Okay, confession: I’m not really the party-going type. I mean I used to be. But then I graduated college and moved to an outer borough and fell in love with a dog, so most of the time I’m not going to show up to whatever hot queer party is happening in the city. HOWEVER. I was given a tip about a party happening on Friday, October 5, that looks really fun that I think you all should know about. And I will actually probably go to it.

Have you heard about this yet? It’s Jason Hill’s “Werk Those Pecs!” Fundraiser, at Slate, which is at 54 W 21st Street, Manhattan (sorry non-New Yorkers, I love you). There will be music. There will be dancing.  There will be a date auction. There will be activists tabling and a visit from New York’s first queer adult toy company. And it’s also a top surgery fundraiser!

Somer Bingham and her band Clinical Trials will be performing, so if you’ve never seen Somer’s superior bone structure in person — ahem, I mean musical talent — now is your chance! Also performing is your new favorite band Tiny Tusks, which promises to be “better than the emo you listened to in high school,” and not just because it’s a band of three hot, awesome queers that you’ll want to be friends with.

It will also be DJ’d by DJs Suddenly & Vixx, the very same tag team that spun at this year’s Official Dyke March After Party at Ginger’s.

There are a approximately one million more exciting details, so you should probably just go check out the event page and then start planning your outfit. 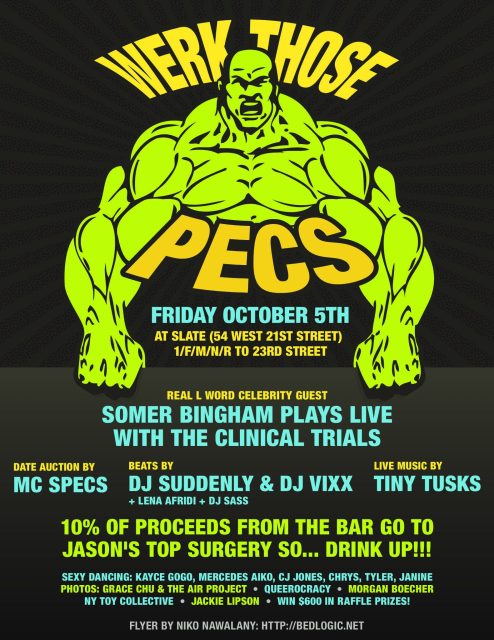