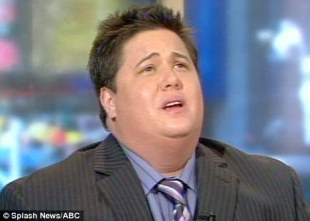 CHAZ: Well, Chaz Bono was on Good Morning America this morning, saying YES to being the face of Transgender America and challenging hundreds of journalists to create short snappy headlines that didn’t make them & their publications sound like ignorant f*ckwads.

Although Good Morning America didn’t really help the news media by introducing the segment as being about Chaz’s “sex change,” from there on out the interview itself kinda rocked and touched on subjects pertinent to everyone in the GLBT community.

He goes on to explain his temporary association with the lesbian community, driven by his sense that “at 13, 14, it was real clear I was attracted to women, and since I am a woman, that must mean that I’m a lesbian.”

Chris asks, “That’s the simple answer, right? Because who you’re attracted to –”

Chaz: “– has nothing to do with your gender identity. And a lot of people find that really confusing, but they’re two completely different things. One is how you view yourself and how you feel and the other is who you’re attracted to.”

So let’s look at the coverage!

Newsbusters.org: “‘GMA’ Features Chastity (now Chaz) Bono’s ‘Journey into Manhood’: “Leave it to ABC and its obsession with alternate sexuality to characterize being a male or a female as a “difficult decision  Introducing an interview featuring Chastity (now Chaz) Bono … this interview only adds to a long list that details ABC’s fascination with the sexually bizarre.”

MetroWeekly gets the “allowed to joke about it b/c they’re a gay newspaper award” for: Chaz Bono, Cher’s FTM son: “Feels great” giving public face (and deeper voice) to transgender issues.

US Weekly: Chaz Bono: “Nothing Scares Me” About Life as a Man.

Now, let’s get to the linguistic violations! The Associated Press sets a bad example with “Chaz Bono says beginning the sex-change process to turn him from a woman to a man is “the best decision I’ve ever made” in Chaz Bono: Sex change is his ‘best decision’, a headline that’s repeated by about 200 other newspapers.

We’ve encountered this issue on Autostraddle before and I was surprised that so many of my friends didn’t know “sex change” is passe. Firstly, “sex” is defined only by genitalia, and gender identity is way more complicated than that. Also, there’s an issue when this term is casually applied to children.

Problematic: “sex change,” “pre-operative,” “post-operative”
Preferred: “transition”
Referring to a sex change operation, or using terms such as pre- or post-operative, inaccurately suggests that one must have surgery in order to truly change one’s sex.
Sex Reassignment Surgery (SRS)
Refers to surgical alteration, and is only one small part of transition (see Transition above). Preferred term to “sex change operation.” Not all transgender people choose to or can afford to have SRS. Journalists should avoid overemphasizing the importance of SRS to the transition process.

What do you think of the interview and the coverage?

COLLEGE: A look at what the internet is doing for learning, curiosity, and creativity outside the traditional classroom: How the Web Liberalized Liberal Arts Education. (@good)

PALIN: Sarah Palin’s “Going Rogue” in a flash. Who needs a book when you have a little word cloud? (@cbsnews) Also here’s six scary quotes from her book tour. (@jezebel)

I am happy that Semenya, after her long journey, will be recognized as an international athletic superstar. I hope that her struggle illustrates just how much work there is left to be done to promote understanding of and support for the variety of human gender expression all around us.