This week, Dr. Sanjay Gupta, a neurosurgeon/journalist with a talk show on CNN, did a special report regarding a nonprofit that offers free plastic surgery to kids who are bullied for their physical appearance.

The report follows 14-year-old Nadia Ilse, who has been bullied since she was in first grade for her supposedly large ears. Since the age of 10, Nadia has been asking her mom if she could have her ears pinned back in order to stop the bullying. The bullying occurs so frequently that it all just blurs together in her memory. On one level, Nadia understands that people should love and accept each other for who they are; but she also believes that the taunting will never stop, “It will just keep going; get worse and worse.” 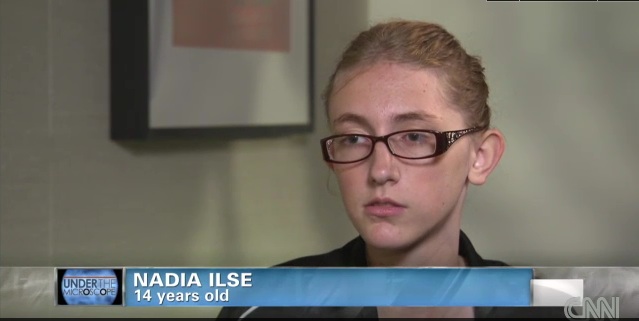 Desperate to help her daughter, Nadia’s mom contacts the Little Baby Face Foundation, which funds such operations. The foundation flies Nadia from Georgia to New York City to have her ears pinned back, just as she’d requested. But Dr. Thomas Romo, a plastic surgeon for the foundation, points out some additional features that he feels need correcting: he says her chin is too pointy, and her nose too large and asymmetrical. Dr. Romo says that those aspects of her face will stand out more once her ears are pinned back. So, in addition to the ear correction, Nadia has a reduction rhinoplasty and a mentoplasty on her chin. It’s a four hour operation that normally would have cost 40 thousand dollars, but for Nadia, it’s free.

Seventy-two hours after the surgery, when Nadia sees her new face, she says, “I look beautiful. This is exactly what I wanted. I love it.”

The thing is, before the surgery, Nadia was already beautiful. Her face was definitely not symmetrical, and yes, her ears weren’t small. But to me she had a very distinctly fourteen-year-old girl face in that she hadn’t yet grown into her own features. Doesn’t everyone go through a phase where their nose or their ears or their cheeks look too big, before they get to their twenties or thirties and things even out? Fourteen is an awkward age for everyone. And if not 14, than 12, or 17, or eight, or whenever. We all go through an awkward time at some point. It’s part of growing up. And while you’re in that awkward phase, it can feel like it’s going to last the rest of your life. But it doesn’t. Your 14-year-old life is not the rest of your life, and I think kids need to be reminded of that from time to time.

After the surgery, as Nadia is interviewed by Dr. Gupta, she looks like a completely different girl. The quirky charm of her slightly crooked features is replaced by a conventional prettiness. Her face is perfectly symmetrical, she’s wearing a ton of makeup and she looks much older. But there is still a sadness in her eyes, even as she says, “I feel better about myself.” Nadia will start counseling soon, and says that she feels confident that when she goes back to school in September, the bullying will stop. 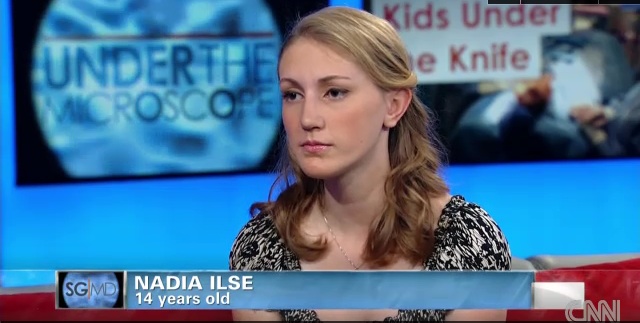 It makes my heart hurt that Nadia changed her face so that she wouldn’t be bullied. To me, that says that the problem was with the way she looked, not with the way she was being treated, and it looks a lot like victim blaming. Why are the kids who get bullied the ones who have to make changes? I wish we lived in a world where rather than changing ourselves to be “acceptable,” we could teach other people how to be accepting.

On the other hand, when I was a young teenager, I developed severe acne all over my face and body. Nothing I did made it go away. My pimples would outsmart any prescription, would unite and rise above my manic exfoliating rituals. And people were always making comments about it that made me want to hide underground. I became really, really good at putting makeup on, and wouldn’t let anyone see my skin without foundation, concealer, and powder. I still had acne when I went to college, when everyone else around me was done with that phase of life. It was so stressful to wake up every morning not knowing what my face was going to look like.

So when I was 20, I went on Accutane for six months. Afterwards, I was completely cured of the acne that had plagued me for seven years. But Accutane gave me a stomach condition that makes me prone to ulcers, and probably will for the rest of my life. You win some, you lose some.

All this is to say that I understand desperately wanting to change your face, and I understand wanting to use whatever tools are available to you to do so. Changing something about your appearance that makes you miserable can be a transformative experience. But what if you only hate a part of yourself because someone else told you it was ugly? Who is to say Nadia would have wanted to change her ears if some little jerk hadn’t bullied her about them?

I have a sinking feeling that I can’t let go of that Nadia’s surgery is not going to make the bullying go away. Bullies will always find something to make fun of, regardless of what you look like. What if Nadia becomes “plastic surgery girl”? And what if no matter how conventionally pretty she looks, she never sheds the feeling that there was something so wrong with her that she needed 40 thousand dollars worth of surgery to change it? Personally, when I look in the mirror, all I can see are my acne scars, even though I’m told that they actually aren’t there anymore. What if Nadia only sees the parts of her face that a doctor changed, and not its original, beautiful charm?

Girls should be empowered to feel good about themselves; this I think we can all agree on. But to what end? And if kids change themselves to fit the beauty standards of the meanest kid on the playground, who wins?