Summer holidays are upon us. The sun is shining and the grass looks greener anywhere besides your front yard. Last year LGBT vacationers dumped $65 billion into the American economy so we could relax, put our feet up and escape the stress of everyday life. However, we’ve been getting a bit more on our pillows than a foil-wrapped chocolate mint. You know what else is stale and leaves your mouth dry? Unsolicited bigotry!

Nowadays you don’t even need to check in to partake in the complimentary homophobia. Sometimes you merely walk by a B&B and they’ll spew their hate in a poorly kerned sign. 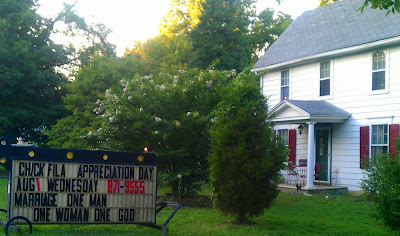 This was the lovely sign Joianne Fraschilla saw when she walked by the Whitebriar Bed and Breakfast in Beverly, NJ. Given that this is not, “like visiting Grand Mom,” Fraschilla went to their Facebook page to let the B&B know that her family was disappointed by their support of Chick-Fil-A. Instead of receiving an explanation, an apology or even semi-intelligent reply, she got this from owner Carole Lokan-Moore.

Isn’t it wonderful Joanne Fraschilla, that you and your son can enjoy the animals here because I have a traditional marriage with a husband who works with me 90 hours a week to take care of these animals, and the summer camp….we’re 66-68 years old….there were no gays or queers in our time…..if two old ladies chose to live together..so be it, let them deal with God when they get there…but to have the “face sucking” thrown in my face of two gay lesbians who are totally destroying the “normal balance in a child’s life” as you claim your son…where is the role model that your son needs to know how to act like a man? or will he only see the “one sided selfishness” of a “single parent”…and end up an out cast in society by being “gay” himself because he didn’t have a father as a role model. I’ll pray for you….remember what the bible says: “Lay down with dogs, get up with fleas”…..guess that’s why God invented aids…. THIS LOCAL BUSINESS WILL BE ONE MAN ONE WOMAN ONE GOD MAKES MARRIAGE….AND PROUD TO DO SO….YOU SHOULD BE SO LUCKY TO OWN YOUR OWN BUSINESS

Several media outlets have already covered how ridiculous her statements are. Franschilla is organizing a petition to ask the B&B to apologize, but it may be for nought. Lokan-Moore is a proud small business owner, proud Christian and proud bigot. In her own words, “a whole lot of criticism isn’t going to change my mind.”

Unfortunately the arrogant bigot-trinity (privately run establishments, religion and discrimination) comes up quite often. It seems like hatemongers think they aren’t accountable for their discriminatory practices as long as they are The Boss with a thick book in the bedside table drawer. Faith-based discrimination comes up in B&Bs more often since guests are staying in the proprietor’s private house, where the owners do have the right to their own religious freedom. However, converting a private residence into lodging causes it to become a public accomodation which is subject to laws protecting individuals from discrimination. Sexual orientation-based discrimination is tricky in the U.S. since protection is still on a state-by-state basis, but we’ll wait for the day these rights are granted to all Americans.

Luckily, more individuals are winning the fight against bigots and their businesses. In 2009, a gay couple was barred from a bed and breakfast in Grand Forks, BC. Brian Thomas and Shaun Eadie had booked a stay at Susan and Les Molnar’s Riverbend Bed and Breakfast, but had the reservation cancelled once the Molnars realized the men were gay. The men were rightly angered and took the Molnars to court. At the recent hearing the Molnars’ lawyer defended their actions because “the Molnars could not allow activities in their home that would offend what they believe is their God and their church.” The BC Human Rights Tribunal separated church from state because although the B&B operated out of the Molnar’s home it was still “a commercial activity, subject to laws preventing discrimination based on sexual orientation.” The couple was awarded $3000 for the ordeal. It’s a financially small win, but it’s a reminder that we have the right to travel just like everyone else. 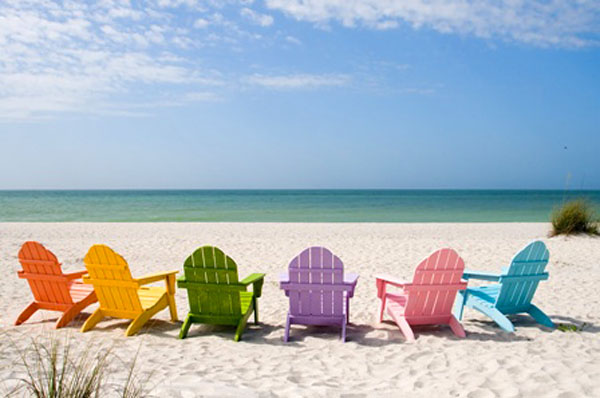 Times are a-changing and sometimes two ladies need a queen sized mattress, not two twin beds bolted three meters apart. If you are lucky enough to travel, take the opportunity let your money speak and support small businesses that support you. The more we’re out there, the more the hospitality industry will realize that they need to cater to us as well. If you do end up vacationing in an unfriendly place and don’t have a pick of accommodations, fly under the radar (if you can) strictly for self-preservation or stick with a chain that has a great track record. Luckily, there are more and more options aimed at queers so you don’t need to constantly rely on Choice Hotels (unless you want to).

Sometimes a B&B will seem utterly perfect, but you don’t know whether they’ll turn on you if you reveal that you’re gay. If you have other housing backups, be openly queer when you book. Let the person know that you’re planning a trip with your girlfriend/wife/partner, not your sister/best friend/tennis coach. If they react badly or it just feels off, politely let them know that there’s a reason you’re paying to stay elsewhere. No amount of “antique furnishings, collectibles and oriental rugs [will] make you feel at home” when the proprietor is a homophobic asshole.

Don’t feel too dismayed if you can’t stay at that one beautiful inn. When it comes down to it, you wouldn’t want to stay in a hateful place, and you definitely wouldn’t want to give them money. You’d rather get the discrimination out of the way by phone before your safety, shelter and deposit are at risk when you check in. Just be sure to warn other travelers of establishments with bigoted policies. If something truly heinous occurred let your case be known on a larger scale. Perhaps bigoted business owners will see the error of their ways when they see the void in their cash registers that could have been filled with a share of 65 billion rainbow dollars.