feature image via The Telegraph

+ Canada’s Prime Minister Justin Trudeau announced legislation on Monday to protect trans people from hate speech and discrimination. “We must continue to demand true equality,” Trudeau said in a speech at a Montreal event hosted by gay rights group Foundation Emergence. “We must carry on the legacy of those who fought for justice by being bold and ambitious in our actions, and we must work diligently to close the gap between our principles and our reality.” With a liberal majority in the House of Commons, the legislation is most likely to pass. Bill C-16 would add gender identity alongside race, religion, age, sex and sexual orientation under the Canadian Human Rights Act and add transgender people to a list of groups protected under the Criminal Code. 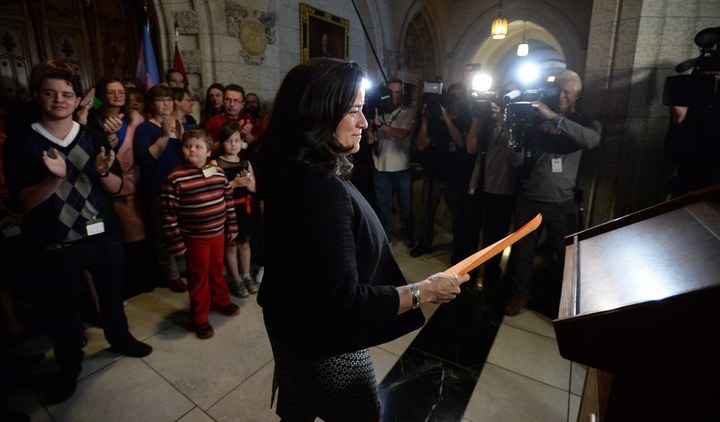 Justice Minister Jody Wilson-Raybould officially introduced the legislation today in Parliament surrounded by trans rights advocates. “No one should be refused a job, disadvantaged in the workplace, be unable to access services or be the target of harassment and violence because of their gender identity or gender expression,” said Wilson-Raybould. This is really awesome and the U.S. should take note!

All About Bathroom Bills

+ Eleven protestors were arrested yesterday at North Carolina’s Legislative building. They stormed the office of the House clerk demanding they meet with a legislative leader to discuss HB2.

+ Police officers in North Carolina won’t be enforcing HB2 because they’re not even sure how to enforce it.

+ The federal government won’t be withholding federal funds from North Carolina just yet because it still needs to play out in court, said White House spokesman Josh Earnest.

+ The Massachusetts Senate advanced a trans-inclusive public accommodations bill, sending it to the House of Representatives to be reviewed. It would ensure customers couldn’t be turned away because they’re transgender and making sure trans people can use the restroom that matches their gender.

+ The Transgender Law Center filed a complaint with the U.S. Department of Education on behalf of a transgender boy in Wisconsin who has been denied access to the boy’s restroom at his high school.

+ A Colorado judge ruled Robert Lewis Dear Jr., the man who went on a rampage at a Colorado Springs Planned Parenthood that left three dead, isn’t competent to stand trial. Forensic psychologists ruled Dear’s beliefs that the federal government was persecuting Christians and targeting him for surveillance demonstrated he’s not competent to stand trial. He faces 179 criminal counts, including murder and attempted murder and for now will not immediately stand trial. Dear will be sent to the Colorado Mental Health Institute in Pueblo to be treated for a delusional disorder until the court sees fit he’s ready for a trial.

+ Jian Ghomeshi, a former radio host who has been accused by multiple women of sexual assault and harassment, no longer faces any more criminal charges. His second sexual assault trial was slated to begin in June but the plantiff decided not to go through a demanding, difficult trial so she withdrew. Ghomeshi signed a peace bond at Toronto’s Old City Hall courthouse and that was it.

+ A UK court rejected a married Indian lesbian couple’s request to stay in the UK citing India’s lack of same-sex marriage violated their human rights. This is the first time a same-sex couple has tried to get legal permission to say in the UK by citing their same-sex partnership. The couple has lived legally in the UK for years. They emigrated from India as friends in 2007 and then developed a relationship while studying in Scotland in 2008. They married in 2015. Judges at the court of appeal rejected their application because “returning them home would not be a violation of their right to a family life and would be proportionate on the basis of the United Kingdom’s right to immigration control and a lack of evidence that the couple will suffer violence on return.” One of the women in the suit said:

“My wife means the world to me, we are well integrated into UK culture and can live openly as a married couple here. At the end of the day all we want is to live somewhere where our marriage is recognised as having the same legal status as a heterosexual marriage.”

She added: “In India we wouldn’t be allowed to live together or see each other. I can’t imagine life without my wife. The expression of our love for each other is being snatched away from us. It’s a very scary thought.”

+ A calligraphy studio in Phoenix is suing the city over their LGBT non-discrimination ordinance. The two Christian women behind Brush & Nib, a calligraphy studio which sell paintings and calligraphy for weddings and events, believe the ordinance could be used to punish them if they choose not to cater to same-sex couples, thus violating their religious freedom. The business argues since calligraphy is art, it should be considered free speech and shouldn’t be censored or controlled by the government.

+ Norway is considering a bill that would simplify the process of changing one’s legal gender to the equivalent of changing their legal name. The process would only require a form and would also allow parents to change the gender of their child as young as six while teenagers over 16 don’t need parental consent to change their gender. Currently the country requires trans people to jump through various hoops in order to change their legal gender like showing proof of their gender change and undergoing psych/medical evaluations. 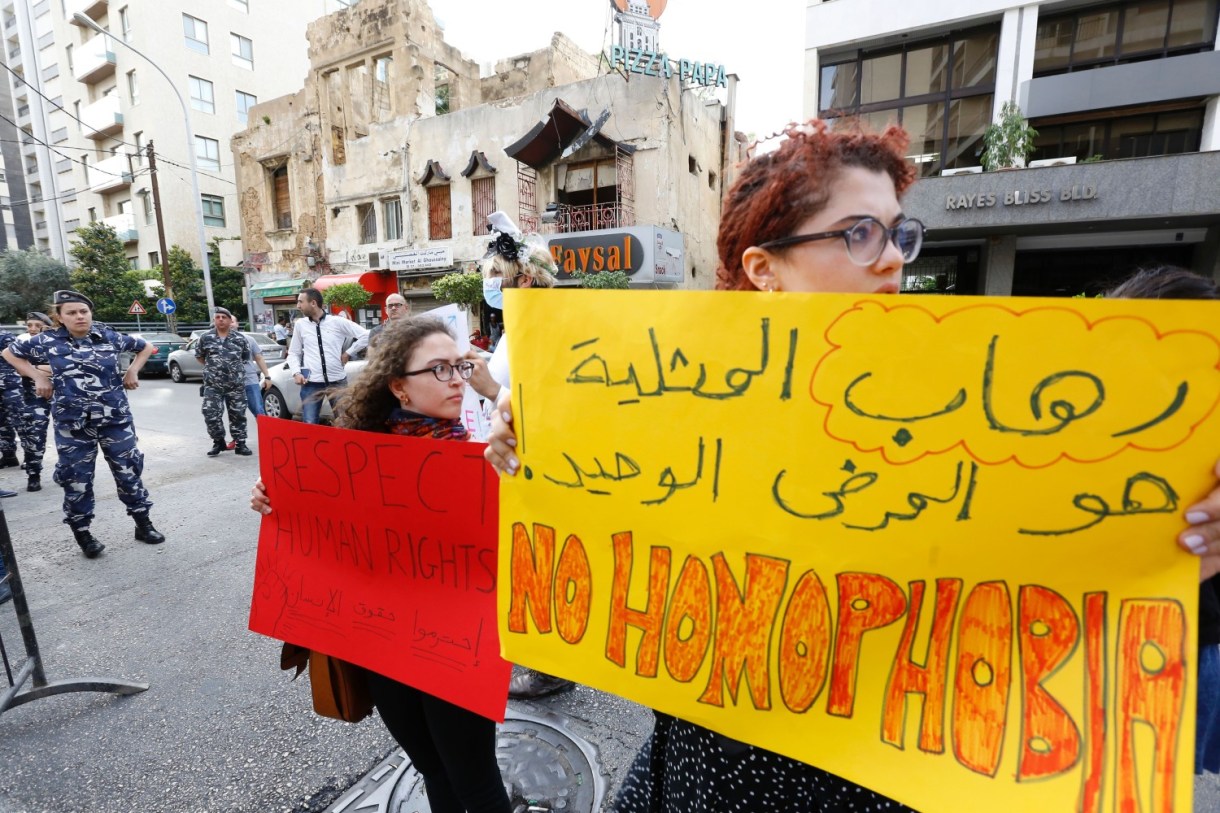 + About 50 LGBT activists gathered outside of the Hbeish police station in Beirut, Lebanon and staged a rare protest demanding the abolition of a law that criminalizes homosexuality and the release of four detained trans women. The last LGBT protest was held in 2012. The event was organized by the Helem association.

+ Bangladesh police arrested a suspect who may have been involved in the murder of an LGBT magazine editor and activist, Xulhaz Mannan and his friend, Tonoy Mahbub. The suspect, Shariful Islan Shihab was a former member of a banned Islamic group who then joined another militant group, Ansarullah Bangla Team in 2015. The Associated Press reports: “He said Shihab told police during questioning that he took part in stabbing to death Mannan and his friend as ordered by his group’s high command. There was no independent confirmation of the police officer’s claim.”

+ Brazil’s first woman president Dilma Rousseff was suspended last Thursday and is now undergoing an impeachment trial. She has been replaced by Vice President Michel Temer, who immediately unveiled an entirely new cabinet made up of all white men which is bad news for a country who is predominantly black or mixed race and has more female voters than male voters. In large part, Rousseff was suspended because of sexism. Before the Senate voted to suspend Rousseff, the lower-chamber voted to impeach her in April, with many holding up signs that said “bye, dear.” And in March during an investigation of the former President, wire-taps of phone conversations of top politicians revealed their use of sexist and vulgar language to describe women including Rousseff.

“There has been, mixed in all of this, a large amount of prejudice against women,” Rousseff said at a news conference last month, as reported by Reuters. “There are attitudes toward me that there would not be with a male president.”

Technically, Rousseff is being accused of “misappropriation of funds to cover budget gaps and boost confidence in Brazil’s failing economy.” However corruption is rife in the country and many of the men in Temer’s cabinet and also Temer himself are suspected of corruption but have never been impeached or tried.

+ In December, a man ordered a Muslim woman to take off her hijab and saying “This is America!” while on a Southwest Airlines flight from Chicago to Albuquerque and when she didn’t comply he pulled it off her, exposing her head . The man plead guilty in the District of New Mexico for “using force or threat of force to intentionally obstruct a Muslim woman … in the free exercise of her religious beliefs.”

+ George Zimmerman, the man who killed 17-year-old unarmed Trayvon Martin and was not found guilty in his murder, tried to sell the gun used to kill the teenager on two different gun websites. The websites decided to take down Zimmerman’s posts and didn’t want to be involved with selling the firearm. On both websites Zimmerman provided a sickening description of the gun: “I am honored and humbled to announce the sale of an American firearm icon,” the websites said. “The firearm for sale is the firearm that was used to defend my life and end the brutal attack from Trayvon Martin on 2/26/2012.”

+ Austin LGBT advocates are pushing for rainbow-colored gay pride crosswalks to be implemented in the city’s warehouse district where the majority of gay nightclubs reside.

+ Immigration activists and trans advocates began a hunger strike to protest the detention of undocumented transgender immigrants and to pressure Santa Ana officials to end their contract to house federal immigration detainees in the city jail. Trans women face disproportionate amounts of violence while in immigration detention centers and currently there are 27 trans women detained at Santa Ana’s jail. There are three initial hunger strikers Jorge Gutierrez, director of Familia: Trans Queer Liberation Movement.; Jennicet Gutiérrez, a trans Latina activist who made headlines for interrupting Obama’s remarks during a LGBT celebration and Deyaneira Garcia, a senior at Segerstrom High School.

+ West Point won’t be punishing any of the black women students who posed in their gray dress uniforms with their raised fists.