It’s finale week. How are you feeling? Overwhelmed in the best and most terrifying ways? Yeah, me too! With Root and Shaw’s reunion occupying my mind, I’ve barely even had time to cope with that Jane the Virgin finale. Let’s check in on Empire and Grey’s Anatomy, and then I’ll post a standalone piece about Jane.

In the meantime, Mey’s feelings are my feelings too.

This is how ridiculous I am during this Jane the Virgen finale pic.twitter.com/ooQ79mppJb 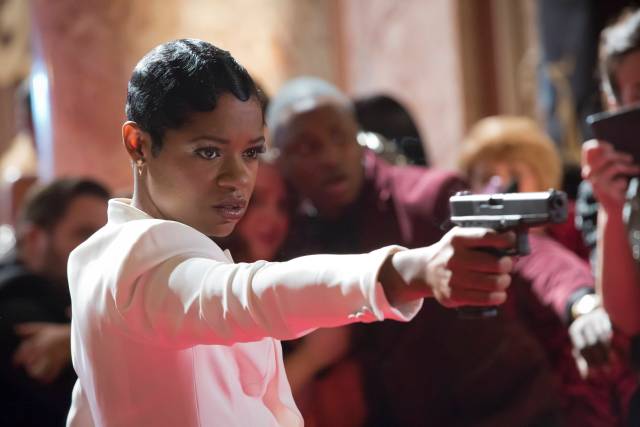 I would write a whole lengthy recap for Empire because it was actually a great episode. BUT I need Heather to tell me the rules. We have a list of lesbians that have been killed this year but I think we need a new list. The list of lesbians, all black, who have ended up in jail instead of dead.

Let’s just jump ahead to the end of this week’s episode of Empire. Remember last week when Cookie’s assistant, Porsha, put that bug in her sister Carol’s ear? She told her that if she was in Carol’s shoes she would be jealous that her sister had everything and she had nothing. Clearly, this information stuck with Carol and prompted her to go out on this date with their old friend of the neighborhood who is a federal agent. Cookie confronts him and confirms that he is a fed but he claims he’s just trying to spend time with a new friend. Cookie isn’t buying it. She confronts Carol with this information and Carol, who totally fell off the wagon with her drinking problem, uses the liquid courage to tell Cookie about all the ways that Cookie has used her. She claims Cookie has never cared about her and always thought she was better than her. Cookie completely loses it and tells Carol to get out of her office and get her shit out of her house. BTW, their sister, Candice, was right: Hurricane Cookie tore up her office when she put Carol out.

Later that night at the ASA’s, Carol, who is supposed to be Cookie’s date to the show until they fall out, shows up on the red carpet completely hammered. After Cookie stops her and tells her to take her drunk ass home before she drags her by her nappy weave, she encounters Freda Gatz who offers to get her an Uber. Freda doesn’t have time to fool with her because she has press to do. Carol tells Freda the only reason she is even on Empire’s label is because Lucious feels guilty about what he did to her father. In that moment Freda pieces the whole thing together. She first met Lucious while visiting her father in prison. Lucious came down to the hood to find her and encourage her to put her rage in the music but both Jamal and her father warned her not to trust Lucious. You see the look on her face when all of this clicks for her and she takes off running down the red carpet. She grabs a gun from a security guard’s holster, clocks the guard in the head and keeps running. She stops right at the end of the carpet, takes aim and fires at Lucious, missing and hitting Jamal instead.

So you see I need to know the rules. Freda is pretty much done on Empire, but she didn’t just die. Freda makes the second black lesbian on TV this season that exits the show in handcuffs headed to prison. The first was Loretta Devine’s elder butch lesbian character C.C. on Being Mary Jane. Then of course you have Poussey on OITNB who is already in prison. Is that where we are destined to be? Invisible or in prison?

With that, there are no more queer women on Empire, since the writers seem to only use Tiana when they need to tempt Hakeem. There may not be any queer characters at all if Jamal dies, which is a possibility based on the current beef between Jussie Smollet and Fox. We will have to see what next season brings. 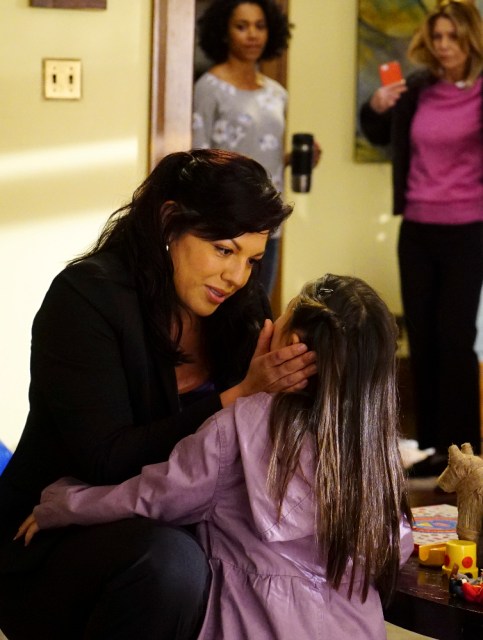 Mommy’s gotta go get character assassinated, be back later, love you.

Aja is on a short hiatus, so I’m going to finish up these last two week’s of Grey’s Anatomy for you. (This is Heather, by the way.) After everything Callie put her ex-wife and friends through, dragging them to court and forcing them to choose sides and gloating while Arizona sat on a stand and was both slut-shamed and forced to endure accusations fueled by the ceaseless cultural misogyny that tells women they can’t be good mothers and have successful careers, she has decided to call it quits with Penny. This woman was sooooo important to Callie that she acted like a strange monster we’ve never seen before to try to move across the country with her, and now they’re done. Because it’s just too hard for a mother to be away from her daughter like that. “YOU THINK?” is a thing Arizona does not yell at her but would have been justified in doing.

Arizona does finally break, through. After Callie calls it quits with Penny, she asks Arizona if she can have Sofia for the night, but Arizona has already switched around a bunch of dates with her, and she’s out of patience. She tells Callie she’s the one who made this whole mess, and yeah, it sucks for her that she just had a breakup, but also SHE CAUSED EVERYONE’S PAIN INCLUDING HER OWN.

I really hate this storyline. Callie Torres is the longest-running bisexual character on TV. She’s the only bisexual Latina character on TV and one of the only Latina queer women, full stop. She’s also the most nuanced and most known bisexual TV character in history, thanks to Shondaland’s astronomical ratings successes these many, many years. This whole custody thing is SO out of character for her, and but the wider audience is just seeing another bisexual woman act like an erratic, vindictive partner (and ex-partner). It just never ends for bisexual women on television. And I mean, no, Callie’s not acting like a jerk because she’s bisexual, but she and Bo Dennis were literally the only bi TV characters who were: a) main characters, and b) have never been portrayed as untrustworthy and manipulative. And now Bo is gone and I don’t even know if Sarah Ramirez is coming back to Grey’s. Is this really how it’s going to end for such a groundbreaking character? After Prop. 8, Callie was literally all we had!

I know, I know. Shondaland is an equal opportunity playground for complicated women, but can the bisexual Latina get a break? She’s endangered!