Jamie Babbit is somewhat of a queer icon. She is our collective root. What would it be like to be a baby lesbian if there was no But I’m a Cheerleader? How could we properly function as a queer society? What would we dream about had we no Clea Duvall smoking a cigarette?? Thank you, Jamie, for giving us these beautiful reveries and hopes for the future.

Babbit’s new film, FRESNO, premiered at SXSW this weekend and I sat with her before it happened, so this interview is sort of out-of-date, but it’s whatever. During the interview I learned a few key points:

(1) Jamie Babbit works with all of her wives.

(3) Jamie Babbit did not want to hang out in Cleveland for long enough to make a movie.

Below is the interview, once you’ve finished reading, please tell me what you’ve learned. 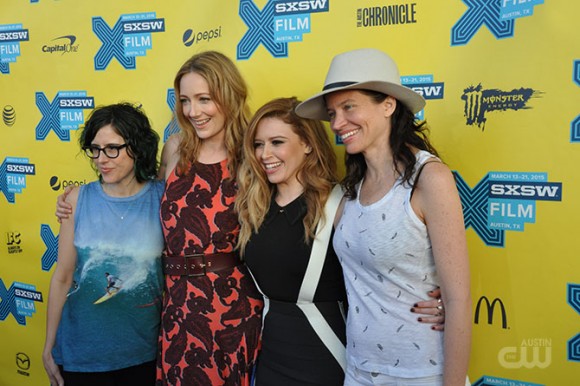 …in San Francisco, they did a special night honoring Natasha Lyonne.

Yeah. It was at the Castro Theater, and they did a Rocky Horror Picture Show staged version of But I’m a Cheerleader with a drag ensemble.

We should mention too that people can get the rights to do But I’m a Cheerleader: the Musical. So many queer college kids are going to flip a nut over that.

I know. It will be so cool. Okay, let’s do this thing. So let’s start by you telling me about Fresno.

So Fresno is a movie that is a comedy. I really wanted to do another movie with Natasha, because now that she’s healthy and sober and working, I wanted to re-team with her.

Boris really wants to get in here too. He got put out because he was bad, and now he’s going to get brought in because he’s bad. Boris, please don’t ruin my interview. So basically, I knew we wanted to do a comedy and I also knew that I really wanted to work with my girlfriend, Karey. And she had never written a movie before, so she was really excited to write an indie movie. And so we knew we wanted to work together. So she pitched me like five ideas. The first one was a road trip movie, and I was like, that’s the most unvisual thing in the world. And plus, every director knows it’s horrible to shoot in a car. So I was like, I don’t want to do that. But anyway, we finally settled on Fresno. It’s a story about two sisters. And it kind of takes off where But I’m a Cheerleader ended, where if But I’m a Cheerleader is about Natasha going to rehab, this story is about someone coming home from rehab. And it’s about how your family, you’re still in the same dynamic you were in when you were in rehab. And you have to come back from rehab and re-establish your family dynamic. Because the dependent addict sister and the codependent sister who enables her — that dynamic is still in play. It’s basically from the view of the codependent sister who has always enabled her sister and taken care of her sister and tried to prevent her horrible life from happening. And it’s kind of from that point of view, and that character is played by Natasha. It’s about untangling from your family bullshit. 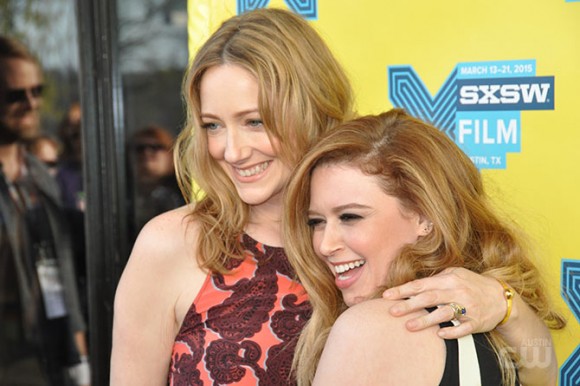 Untangling from your family bullshit. I agree.

Beautiful. Hundreds of lesbians. You’re good for taglines. So you shot Fresno in Fresno?

We shot it in Los Angeles. Originally it was called “Cleveland” and we wanted to shoot it in Cleveland. I’m from Cleveland. Then we went to Cleveland and we realized Cleveland is not a good place to shoot a movie. And I really didn’t want to spend that much time in Cleveland, to tell you the truth. So a weekend was long enough to understand that I didn’t want to shoot there. So I decided that I’d actually rather shoot in LA and just think of, what is the Cleveland of California? And based on research, that’s Fresno.

Beautiful. And that’s premiering at SXSW.

It premiers March 14 at SXSW, and we’ll be hoping to secure a distributor there. But in the meantime, we’ve applied for every gay festival known to man, so we’re hoping that we get to play that round also.

Are there many queer elements in the movie, or do you just get extra points?

No, I get no extra points. One of the sisters is a lesbian, which is Natasha. And her girlfriend is Aubrey Plaza.

Oh, this whole time I thought Aubrey Plaza was the sister.

No, Aubrey Plaza’s the girlfriend of Natasha! And they have really good chemistry. They’re a very cute couple. And I already told Aubrey that she has to do the cover of OUT Magazine, and she was like, “I’m very excited if Natasha does it with me.” So they were super cute together. And the lesbian sister is Natasha because I only cast her to play lesbians, which she said is very hard on her sex life. And Judy Greer plays the other sister, the addict sister. 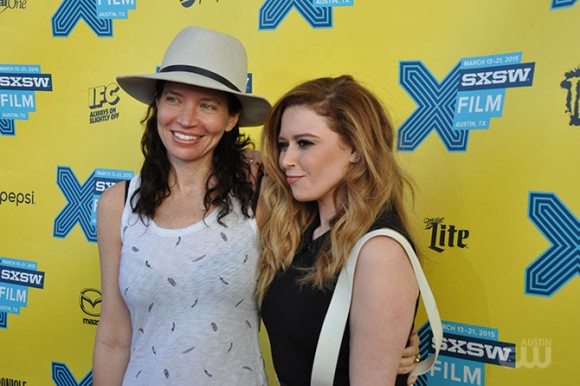 Everything’s coming together now for me and my Instagram watching. I wanted to talk about SXSW a little bit. Because I feel like it was such a different festival five years ago, and premiering a film there five years ago didn’t mean a ton. And now I feel like is a really really cool time to do that.

Yeah. I hope so. I premiered my last comedy, Itty Bitty Titty Committee, at SXSW. And it was super fun, and I ended up winning the Grand Jury Prize which was great. But I don’t think many people in the industry saw that movie. I don’t know if it’s because it’s a radical feminist comedy, or if it’s because no one was really going to SXSW so many years ago. And that was actually 2007, so that was 8 years ago. So I think Lena Dunham and Andrew Haigh – the guy who did Looking – and Lena, who did Girls. Both of them had movies that exploded at SXSW, so I feel like that’s kind of put the festival on the map. So I’m hoping that it will be good for our film.

That Fresno will be the next explosion.

I hope so. I mean, it would just be nice to have a distributor behind it to help get it out into the world.

Absolutely. I feel like everyone that I talk to, when I say your name and Natasha’s name and then Aubrey Plaza — people freak the fuck out. So I think it’s good. You’re doing good things. And then after you premier at SXSW, are you just gay festivaling all over?

Gay festivaling, and hopefully the movie will be VOD in theaters. So we’ll see. But I’m excited to be at SXSW, because Natasha, Aubrey, and Judy are actually going to go too.

Everyone’s going? Man, that’s going to be such a great thing.

Yeah, it will be really fun.

Yeah, that’ll be that night. We’ll do a dinner that Joellen is planning.

Is it a thing that anyone who’s at SXSW can go to, or is it a special thing?

Anyone at SXSW can go to see the movie, and not everyone at SXSW can come to our dinner. There’s just not enough money in a lesbian bank account to afford that, now is there? If only 13,000 people could go to dinner.

Is there anything that you specifically want to talk about?

I don’t think so… I’m looking forward to producing and directing the FX show Married, which Judy Greer is on. And I start that in two weeks. And then I’m also really looking forward to mentoring all the AFI women filmmakers this year. 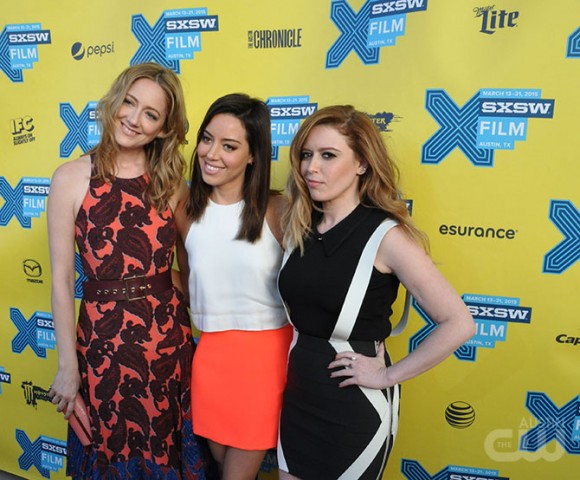 I forgot, we were going to talk about — what is it like to work with your wife on set? Or just in general, in that capacity of writing and directing?

It was really fun in the development of the script – although maybe just more time has passed, so that’s why it feels really fun. I would say probably we did 40 drafts of the script.

So I think she wasn’t quite understanding that when you live with the person who is developing and directing your script, that they have full access to get rewrites at all times. So I think that was exhausting for her. She had never really dealt with that before.

Wasn’t she also working on two other shows at the time, too?

Yeah, but so was I. So I had no sympathy. But I think being in production, she wasn’t around so much because she was working on a TV show, so she couldn’t be around as much as she wanted to be. But she was definitely around a lot in post. Actually, the funny thing – it was very lesbian – I directed it, Karey wrote it, and my ex-wife who I have two kids with produced it. So it was the three of us together.

Yeah, the trifecta. So I would say it’s great, because Karey and Andrea get along really well.

And you don’t get along with either of them?

Well, it’s not that I don’t get along with either of them. But it’s just that I can be the more demanding one to both of them, so I think they commiserate in that. It’s so much work. It’s so much time. But what I like about working together is that you’re spending insane amounts of time with someone that you love and that you’re getting closer to, even if it’s hard. And if it weren’t that person, then it would be some random person that you’d be getting closer to creatively, and there’s something bonding about creatively working with someone too. So I’ve always liked that. But I’ve always worked with my wife. Always. Even from my first short film, Andrea was the producer. I’ve always worked with my wife so to me, that just feels very normal. I don’t know if it’s healthy, but it feels normal.

Well, isn’t that how it goes?

Well, I guess so. But you’re not in the music industry yet.

Yeah, that’s true. But I’m filming a bunch of things for her.

You could be her manager in a millisecond. Like her tour manager.

Well, here we go. That’s how marriage is, right, Boris? Just kidding. He’s not married. I feel like we can end it.

Dannielle has written 1 article for us.