Champagne is in order — not just bubbly wine, actual Champagne (TM). Last night I was out for dinner and a singular email made me drop my naan bread to turn to my girlfriend. Normally I wouldn’t sully my naan for anything, let alone French Parliament proceedings, but this time was different. “Gay Marriage in France! It’s-a-happening!”

On Tuesday evening, France’s lower house finally voted on Bill 344. The Marriage for All draft bill has been making its way through Parliament since November but for many worried citizens, it didn’t look like it would survive. The promised bill was posed to open up the definition of family, granting queer citizens the same familial rights afforded to their heterosexual counterparts. The underlying change from “husband and wife” to “spouses” passed 249-97 on February 2nd. However, the controversial issue of assisted procreation was dropped to appease conservative deputies and as of last week, it was still undecided whether adoption rights were still a possibility. After 5000 amendments by the opposition and countless manifestations put on by allies and opponents alike, the deputies had their vote: 329-229. Gay marriage and adoption? On les a! The times they are a-changing. 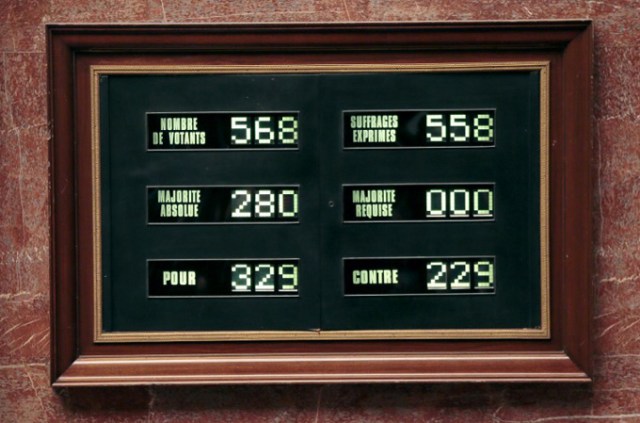 At its heart, the law is supposed to unite families instead of pushing them apart. Leading up the vote, Prime Minister Jean-Marc Ayrault reassured, “This law is going to extend to all families the protections guaranteed by the institution of marriage. Contrary to what those who vociferate against it say – fortunately they’re in the minority – this law is going to strengthen the institution of marriage.”

The Catholic church has been a major part of this very vocal minority, with religious figureheads decrying the immoral future that lies before children of homosexual households. They have taken part in countless conservative manifestations throughout the country, but even in century old institutions like the church, there are people willing to break their silence. Elie Gafray, a retired Catholic priest and current mayor recognized the paradox he’s living. Even though he will abide by Catholic law, he supports gay rights and will marry gays and lesbians as the mayor of Ereac. Speaking to the media and his bishop, he notes that the church is behind the times. “If gay marriage is adopted it suggests the French state is more open to homosexuals than the church. And that bothers me.” He’s received countless letters from citizens, the majority of which applaud him for representing a modernized viewpoint. 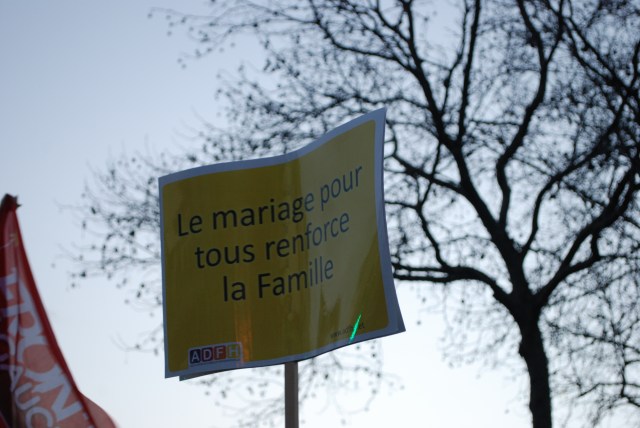 Thankfully he isn’t the only one. More people are willing to open up and cross over party lines and vote for what they feel is right instead of what they’re told is right. Roselyne Bachelot, a right-wing politician and former minister under Sarkozy spoke of her support earlier this month.

I’ve been fighting for equal rights for heterosexual and homosexual couples for forty years. I remember very well when we were trying to promote civil unions several years ago…there were only four or five of us (politicians). We went to go see right and left-wing politicians who said: ‘What is this? But we got through to them and we won, and  we’ve seen more and more people joining our fight. And we will continue.

The clear win by 100 votes in the lower house just shows how many people have joined that fight. Justice Minister Christiane Taubira spoke after Tuesday’s vote, giving an impassioned speech in her signature style combining humour and poetry. She reminded her fellow MPs that the game of love will still exist for France’s citizens and their orientation has nothing to do with it. 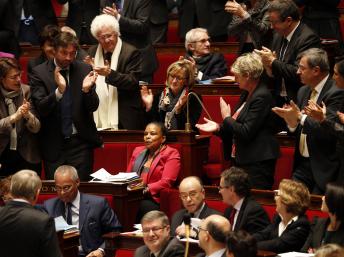 There will still be plenty of women to look at you, gentlemen, to observe you, to try and see the tenderness that sometimes exists behind your carapaces, to try to break through the faults that are sometimes hiding behind your affable exteriors and to discern the interlacing of your talents and your weaknesses if you are able to forge paths through the sea, as Antonio Machado.

This bill brought us to think of others, brought us to acknowledge otherness. And otherness, as the philosopher Lévinas said, “is derived from our indestructible sense of empathy.”

Despite being dropped from this bill, the debate for medically assisted procreation continues. Mere hours after the lower house vote, Taubira noted in an interview that this issue is “a legitimate claim for lesbian couples … but that it is a heavy topic that should be dealt with separately.” Given that it is decidedly more controversial, it’s also less likely to receive full support from the majority Socialist government. A high ranking Socialist party member was quoted saying “Hollande knows that MPAs (Medically Assisted Procreation) is what divides the left and unifies the right. If he really had wanted to amend the law regarding MPAs, he would have had Jean-Marc Ayrault include it in the text of the Marriage for All Bill.”  For now, it’s off the table so the rest of the bill can pass. MPA has been submitted to the Nationale Ethics Council, and will be put forward as a separate bill toward the end of the year. If not, then Hollande may hold off and say it isn’t time.

So even if it’s still early and Hollande may not be able to follow through on all of his campaign promises, some queer citizens are already breathing a sigh of relief with this news. Queer couples have to wait until April 2nd for the bill to go through Senate, but they might be able to set their wedding date for this summer. Even if some right wing politicians might try to put a few more constitutional roadblocks in the bill’s way, ultimately there doesn’t seem to be much that can get in the way of the text put forward by the National Assembly which the Socialist Party has majority control over. For now the approval of Bill 344 is a partial victory, but a poignant victory nonetheless.