Welcome back, Boobs Tubers! This week, Kristin and Riese released another episode of To L and Back out into the wild. Valerie recapped the gayest episode of Supergirl in a while and also another amazing-wacky episode of Legends of Tomorrow. Oh, hey, Valerie also did something she hates to do, which is write about a TV show that let her down (it’s Into the Badlands). Drew shared a personal essay about the trauma of being a woman and the first season of Fleabag. And Kayla recapped another episode of gothic-glam horror on Riverdale.

+ If you’re in Canada, you lucky folks will get the third season of Mary Kills People this Monday. The rest of us will have to wait for the return of Mary’s sister Charlotte Sullivan, and also Mary’s queer daughter. Also apparently Elise Bauman is in the third season! Enjoy, Canada! — Valerie Anne

It should’ve been Lucca.

When we catch up with Maia this week still working at Consult-A-Lawyer. She’s entertaining a call about a slip and fall when Roland Blum saunters in. Sure, he got her fired five weeks ago but now he’s here to offer her a new job. She’s understandably reluctant but, surely, anything has to be better than her current job so she follows Blum out.

Once they’re back at Blum’s lair, he reveals why he really wants to hire Maia: the Rindell name still carries cachet in Blum’s circles. Maia’s been trying to outrun the Rindell name for a while now — even choosing to go by “Henson” in an interview — but Blum’s asking her to finally stop running…to choose being needed over being liked. Some things you can’t outrun so Maia just decides to embrace it, partnering with Roland to start Blum, Rindell & Associates. For a moment, it looks like things might work but, as they are wont to do when Roland Blum is involved, things quickly come crashing down.

Blum’s called before a legal disciplinary commission to respond to allegations from Reddick-Boseman that he suborned perjury (spoiler alert: he did). He alleges that Reddick-Boseman’s just trying to silence him because he knows about their founder’s rapist past and tasks Maia with finding a way to quash the subpoena. Maia doesn’t believe Blum and reaches out to Marissa to, seemingly, get confirmation of how wrong he truly is. But, of course, Marissa can’t offer her that.

Smarting from Liz’s decision to mask knowledge of her father’s other victims, Marissa joins Maia at a bar to lament to her friend about what’s happened at work. But Marissa’s not talking to a friend anymore…or even to a colleague…she’s talking to a competitor…a competitor with a vested interest in making sure that Roland Blum stays a lawyer. Maia recognizes what she has to do and how much she’s going to hurt Marissa by doing it, so Maia tells Marissa she loves her, kisses her and leaves. Marissa doesn’t realize until later — when the partners return with news that Blum’s now representing two of Reddick’s victims — that she’s been betrayed.

It’s all for naught, though: Reddick-Boseman admits to Reddick’s “sexual indiscretions” and sinks Blum’s defense. And when Maia doesn’t show up to perjure herself before the disciplinary committee, he’s disbarred…and now, all that’s left for Blum to do is enact mutually assured destruction. 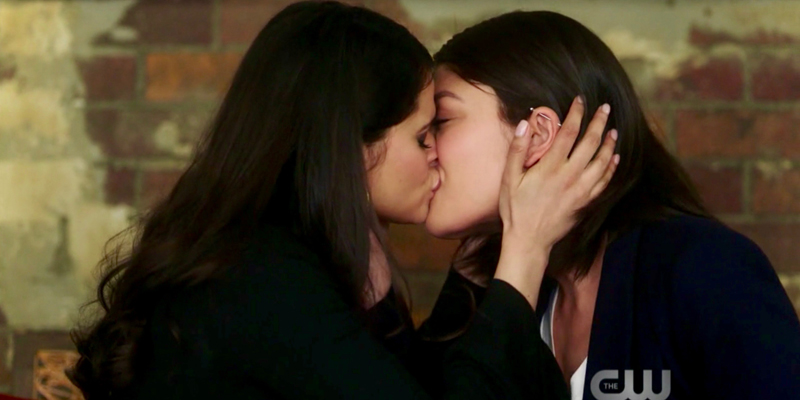 Yes the kissing is cute and all, but what about Niko’s piercing? Where do I get one of those?

It all starts with Niko visiting the Vera home with tears in her eyes. She’s been wearing the protection ring that Mel gave her, but her fiancée Greta understandably has some questions – like why exactly is Niko wearing some other woman’s ring? And why has she been spending so much time with Mel, anyway? Now Niko is supposed to get married in two days, but she knows that she can’t answer Gretas questions. The truth is that she has feelings for Mel, and that’s NOT the kind of thing you want hear 48 hours before you are supposed to walk down the aisle with someone.

Still, Niko can’t deny the chemistry between them. She reaches in to kiss Mel and a second turns into a moment. The music swells (or maybe it was just the music in my heart) and there’s the slightest exhale before the two move to deepen what’s between them. That’s when Maggie walks in on them. But in the cutest little sister moment ever, she promptly walks back out of the space and makes a lot noise, alerting Mel and Niko of her arrival so they can wipe each other’s lipstick off of their face.
Maggie asks Niko for help tracing this international number calling her sorority sister Lucy (the number traces back to a demon, but Niko doesn’t need to know all those details). After PI Hamada promises to help and promptly leaves, Mel and Maggie have their own heart-to-heart. Despite everything, Mel admits that she’s still in love with Niko. Maggie looks her in the eyes and says the one thing Mel doesn’t want to hear: Then it’s time to tell Niko the whole truth, before it’s too late.

Later, Niko returns with the information Maggie needs to track Lucy’s calls. With her little sister’s encouragement, Mel tells Niko the truth about their relationship. That she was the one who altered Niko’s life without her consent. Niko’s wide eyes grow in terror. How could Mel do this?

“No. So you could sleep better at night.”

And with that, Niko runs away. It’s really unfortunate, then, when she makes it home and barely closes her front door before losing consciousness, her nose bleeding badly. The Harbinger of Hell is back, and that means the prophecy has come full circle. The Apocalypse looms. 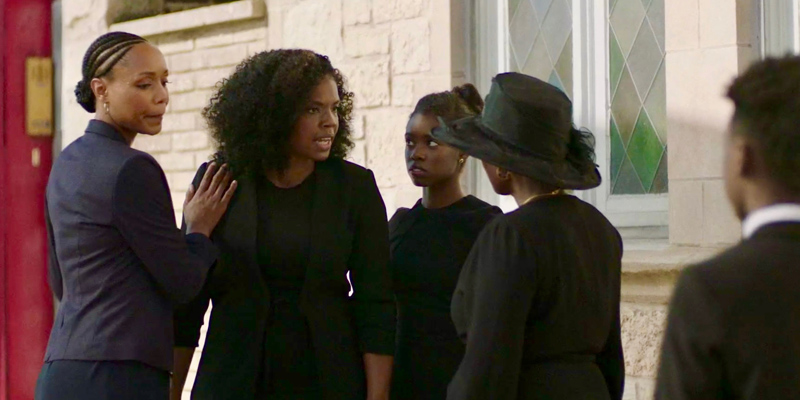 They say it’s not a funeral without a church hat or someone yelling at someone else outside the chapel. Well, now we have both.

Kevin’s father has died, and it’s brought up a lot of bad feelings for everyone. Kevin feels guilty because he didn’t know his dad that well. His parents split when he was still a baby. Then, his mom first got with Karen. Karen and Nina are the only two parents he’s ever known. He loves them dearly. For her part, his mom tries to comfort Kevin on the way to the funeral, but she says probably the worst possible thing you can say to a kid struggling with not knowing their dead father, “You look so much like him.” It shuts his heart right on down.

At the funeral, Kevin’s aunt (his dad’s sister) approaches Nina in disgust. She blames Nina for everything that’s gone bad in her family since the divorce. But what really takes the homophobia up a notch is when this Aunt sees Karen. “After what you did to my brother, you got the nerve to bring your bitch to his funeral” she spits out with such raw vitriol I had to rewind it and see it again. I couldn’t believe my ears the first time.

To make matters worse, Kevin’s sister – who has fond memories of her father from before the divorce and is very lost in the throes of grief right now – tells her mother that she agrees with her aunt! Well more like, she yells it. Yells at her own mother this was all her fault because she didn’t just keep living a lie. That she should have just stayed with a man that she did not, could not, love. It’s painful and untrue. But it’s damn sure ugly.

It’s also left unfinished. Grief takes a long time to unpack, and so Lena Waithe has wisely decided to let this brutal war of words lay heavy in the air for now. No one has apologized to Nina – or Karen – for lashing out. I’m hoping this means we’re going to pick up this thread in future episodes, but sometimes The Chi bites off more than it can chew. They’ve been doing better about that specific problem in the second season though. So, you know, fingers crossed. 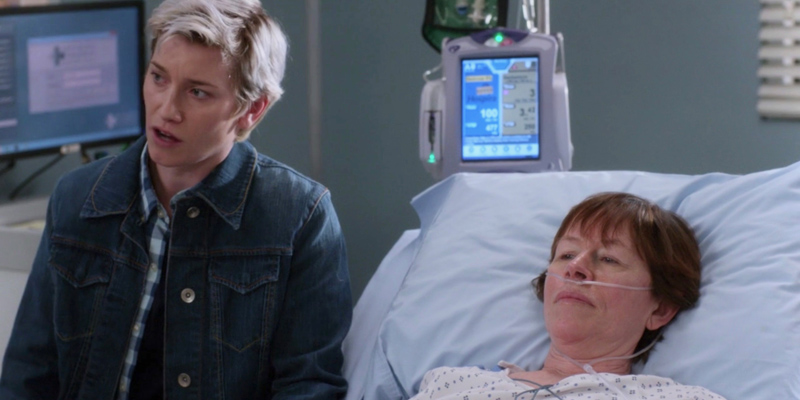 Are you ready for some fresh queer tears? And just in time for Mother’s Day!

Do you remember when Grey’s Anatomy introduced a new non-binary patient a few weeks ago? Their name was Toby? Well Toby is back, their mom is still in the hospital stemming from their original accident. Toby’s been beside themselves with grief and guilt over the incident, but their mom said the most beautiful thing to comfort them:

Toby, honey, there’s no living without risk. You know that better than I do. Up until two years ago, I had that boring job I hated so much. I’d cry in my car every day at lunch. But I was too scared to quit. And then you came home. And you said, “Mom. I’m not a woman and I am not a man; I’m both. And I love you, but I don’t care if you like it or not.”And I realized how much of my life I had lived in fear while you, my child, who I made, was living your truest, most authentic life. Your bravery is the reason I started really living.

Folks, there wasn’t a dry eye in the house.