[Warning: Extreme spoilers for the entire series of Into the Badlands ahead.]

Back in the middle of Season Two, when Tilda and Odessa first kissed, I wrote a piece about Into the Badlands that was full of hope and excitement. I read that piece now, and all I can feel is betrayal.

Granted, my disappointment in the final episodes doesn’t take away from the things I did love about the show. Mainly, the women. I mentioned in my earlier piece that the first two episodes pull a sort of bait-and-switch. The pilot is dude-heavy and fighting-focused, but then in the second episode The Widow appears in all her misandrist glory. There was Jade and Lydia and Tilda and Veil. They were strong and smart and fighting against their stations to gain power. 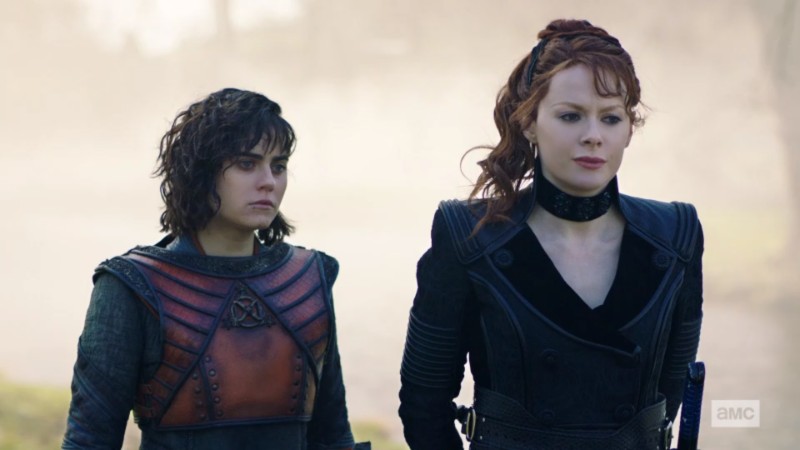 Also The Widow’s fighters were called Butterflies and they had butterfly throwing stars and it was GLORIOUS.

But by the end, Jade was exiled, Veil and Lydia were murdered. Even some of the newer female characters — Baron Chau, Cressida (played expertly by Lorraine Toussaint), Nix… they all met violent deaths. And we’ll get to The Widow and Tilda’s endings but they weren’t ideal. 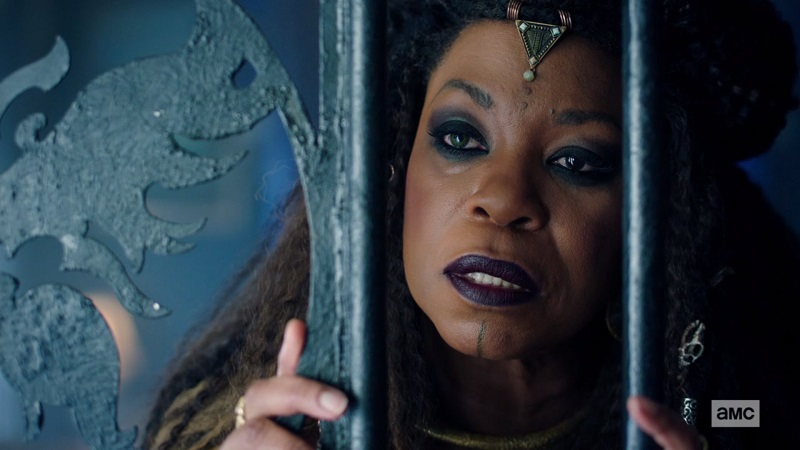 Cressida was also special because she went RED-eyed when her powers activated. But then she murdered Lydia. So. You win some you lose some.

Granted, a lot of people met violent deaths… in fact, I would argue that violence is half the point of the show. And the violence is truly art. The fighting sequences and the directing are stunning, and I swear blood spatter is its own character on the show. And their sclera contact budget was out of this world. 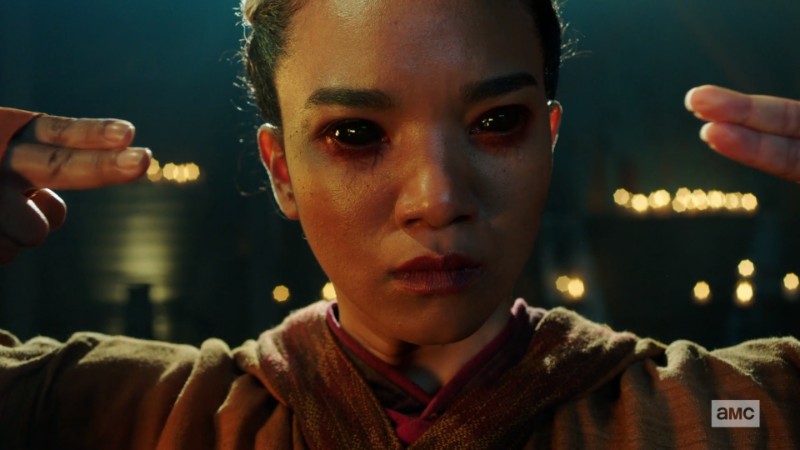 Maybe I’m biased because of Wynonna Earp but I think everyone looks fierce af with all-black eyeballs.

And in the first half of the series, most of the women who were dying went out swinging. But then Nix traveled half the world to stand up to the man who raised her as a daughter, only to have him rip her head off and leave it in the middle of the floor, discarded, disrespected. 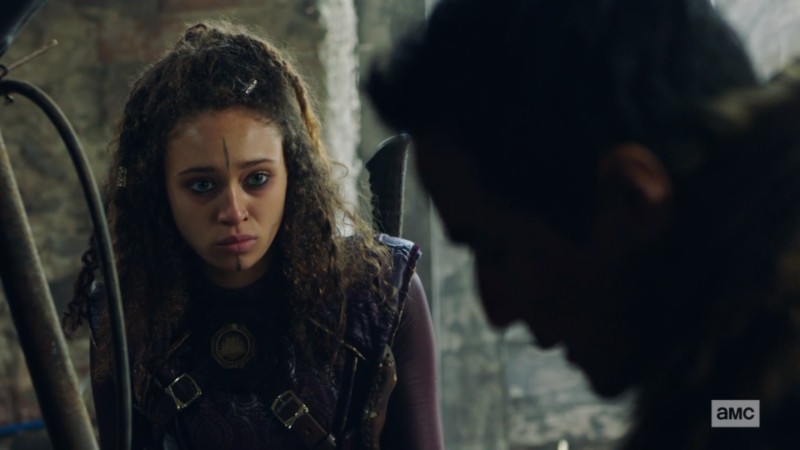 I obviously will not be showing you her severed head so here it is adorable and still attached to her body.

When the show was about power and corruption, about women fighting the literal patriarchy, about children born into a cult of sorts seeing a truth of their own and escaping, it was at its best. The struggle to survive in a world designed to keep you down was a relatable one, even in this strange, post-apocalyptic setting. And the setting itself was very cool! It was like the Shannara Chronicles, where there’s no electricity, plenty of magic, and yet it’s set in a future version of our world. On Into the Badlands, people still travel by truck and motorcycle, old defunct museums are used as cult compounds, dusty, rusted-over bus depots are hideouts.

What I’m saying is, all of this, plus a bonus queer storyline, meant that the show had all of the elements it needed to be my favorite show. But things started to take a turn in this back half of season three. Suddenly the “outsiders” with powers were trying to rise up, and were being called “Dark Ones” (because their eyes went black when their powers were activated). The Widow got pregnant and suddenly became a different person, not wanting to fight anymore, staring wistfully at children. (Though she does, thankfully, join the final battle eventually.)

And Tilda! Sweet, murder baby Tilda. Queer and in love with Odessa, even had a short-lived flirtationship with Nix. Well, fine, they interacted like twice but look at how cute they were! How precious they could have been! 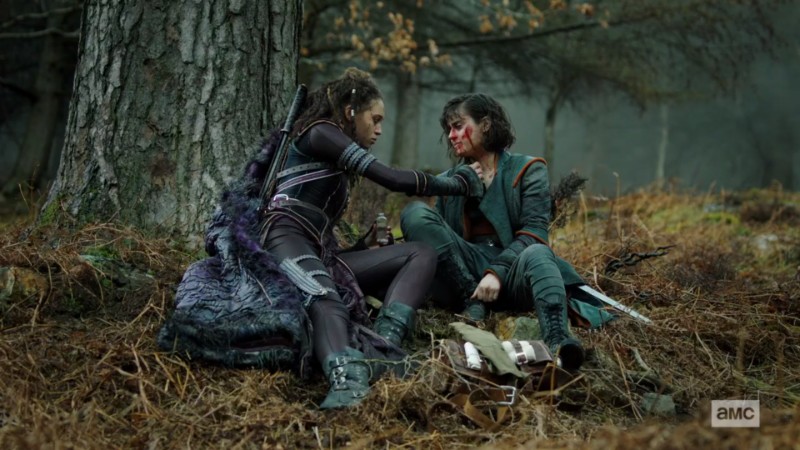 :Adele voice: WE COULD HAVE HAD IT AAAAALL

Her arc ends in two pivotal scenes. One is when she finds the love of her life once more, almost impossibly, in this war-torn wasteland, but Odessa is with another woman. 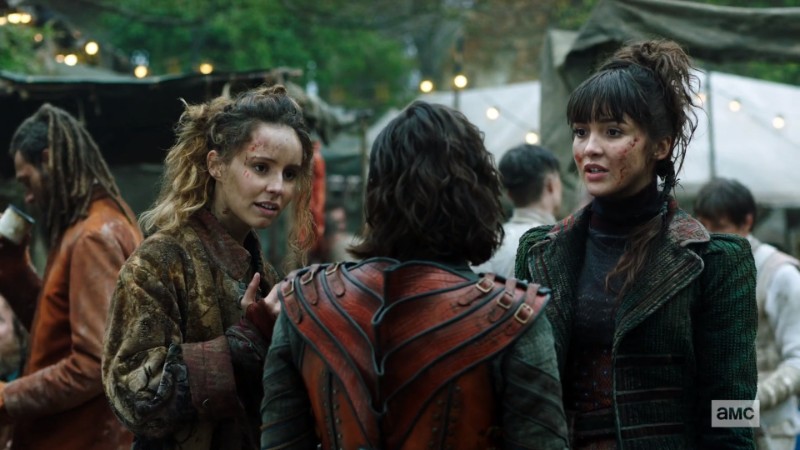 The girl’s name, ironically, is Mercy.

Odessa wants to join Tilda for this final battle, but Tilda turns to her with tears in her eyes and says that she doesn’t want that, because Tilda still loves Odessa, and if something happened to her, Tilda might not survive it. She sacrificed herself for a woman she loves. 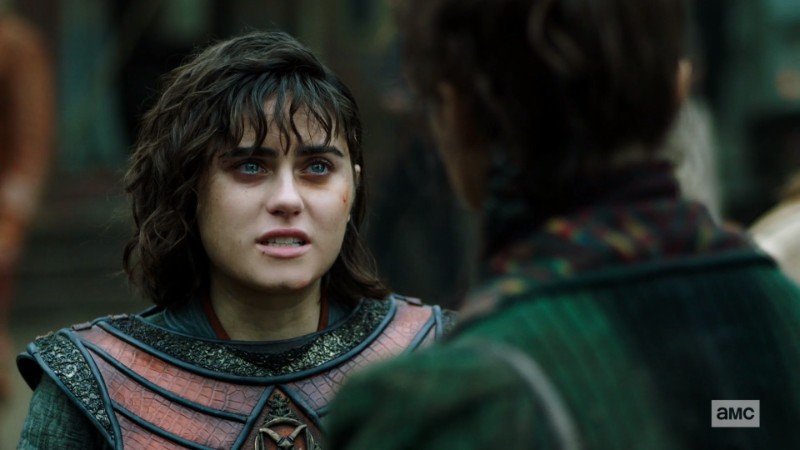 HAVE YOU EVER WANTED TO GIVE A QUEER LADY ASSASSIN A HUG MORE THAN–*thinks of Legends of Tomorrow* Okay don’t answer that question.

And her final pivotal scene, Tilda jumps in front of The Widow, the woman she calls her mother, to spare her and her unborn child from an impending sword. She sacrificed herself for a woman she loves.

The final shot between these two women is The Widow holding an unconscious Tilda in her lap as they ride away, Tilda critically wounded but still with a pulse, out of the badlands.

But the final shot of the whole series is confounding — I have to imagine they didn’t know it was going to be a series finale. Because it ends with a relatively new character named Eli finding a gun. Which would certainly change the game in this sword-wielding world. But feels like a strange note to end on forever.

Or maybe it’s not. Maybe that was their intention. The idea that no matter how many big bads you defeat, there will always be a new evil lurking. That humans are incapable of forming a decent society that doesn’t oppress anyone, where violence isn’t a constant threat. But it just seemed like the original message was going to be more hopeful than that.

Or maybe we’re allowed to expect more from our stories in 2019.

Join A+!
Related:Into the Badlands