As someone who has used several lines from the movie in regular conversation since last Friday, I know I can’t be alone in missing Black Panther as soon as I left the theater. I know we watched All The Stars and listened to The Black Panther: The Album as soon as it dropped but it’s not enough. Aside from buying the comics (which are on sale at Comixology until the end of the month,), what else is there to do to fill that Black Panther hole in your heart (besides taking a stop at Wakandan Beauty Shop)?

Dive headfirst into more Afrofuturism, of course! I’m not an expert by any means but we can go through this learning adventure together.

Real quick, Afrotururism is a term coined by Mark Dery in his essay “Black to the Future” back in 1993. In Flame Wars, Dery interviewed Samuel R. Delany, Greg Tate, and Tricia Rose to further examine and define the culture. Afrofuturism is using science fiction and fantasy to imagine and create a future for black people.

You can read more about it in Tananarive Due’s introduction in the Black Panther Challenge.

Let me take you to the future, robots and androids.

Here are 20 songs, books, and artists to help with your your Black Panther withdrawal. 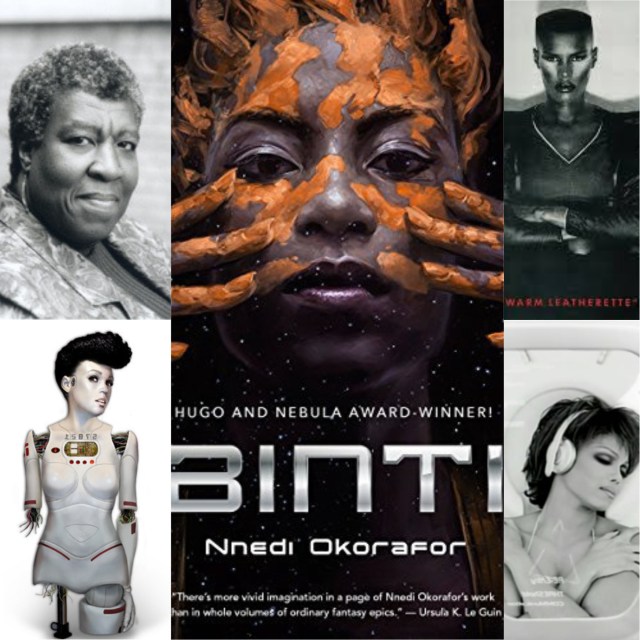 Read Electric Arches by Eve L. Ewing and listen to the audiobook on Spotify

Missy Elliot’s been in the future we just late

Read Afrofuturism: The World of Black Sci-Fi and Fantasy Culture edited by Ytasha L. Womack, listen to Womack’s talks, Afrofuturism and Imagination and Humanity and Afrofuturism As Creative Empoewerment, and read her article, ”Afrofuturism Rising”, in Uncanny Magazine

Pick up Life On Mars by Poet Laureate of the United States, Tracy K. Smith

In this house, we love and adore Janelle Monae, and as thanks for dropping some amazing music not even a week after Black Panther, let’s celebrate her work in Afrofuturism by going and watch her emotion film, “Many Moons”, and then go through Metropolis: The Chase Suite, The Archandroid and Electric Lady in preparation for Dirty Computer coming in April

Get Mothership:Tales From Afrofuturism and Beyond by Bill Campbell and watch him in conversation with Ytasha Womack

Read “Mother of Invention”, a new short story by Nnedi Okorafor. If you love that make sure to pick up the trilogy, Binti and Who Fears Death

Pick up the newest issue of FIYAH Literary Magazine

Listen to Splendor & Misery, a science fiction album following the only black survivor of a slave uprising on a interstellar cargo ship

Read Alley Pezanoski-Browne’s “Black to the Future” article in Bitch Media, then listen to their Afro-Alien BitchTape

Read Black To The Future: Afrofuturism (3.0) by Mark Dery

Bonus:
I’m including Scream because Janet Jackson looks FINE in this video.

If you loved Princess Shuri (of course you did), consider supporting BlackGirlsCode and check out the #BlackWomenInTech hashtag!

A. has written 31 articles for us.