So. Who do you love best? You have to choose. Is it your dishwasher, the workhorse? It’s there for you every day, or every two days, or twice a day. It’s there for you whenever you need it. It is worthy of your love. I don’t have a dishwasher. I also don’t especially mind doing dishes. I do not love the dishwasher best. Is it the washer/dryer? This I understand. Clothing is intimate. Bringing it out into the world to clean it feels backwards and self-defeating. And the time spent waiting for the machine do its work feels like a robbery. I would love a washer/dryer. But I don’t have one.

For me, the one I love best, the only one I love, is Roomba. Not only does Roomba do its job well, it loves its job. It seeks out messes. It explores. It bravely squeezes under beds and climbs over door jams in search of more work to do, and when it’s cleaned all there is to clean, it celebrates a job well done. Roomba is more than just an appliance, but Roomba is only just an appliance. 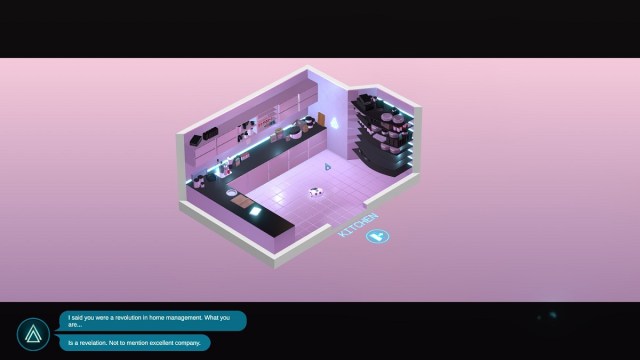 Is this a Hamilton reference?

But imagine a world where Roomba could feel your love, and love you in return? I’m not talking about a modern remake of The Brave Little Toaster, though that would also be pretty great. I am talking about Rumu, an absolute gem of a game out now for Windows and Mac.

You play as Rumu. Rumu was made to clean and to love, and Rumu loves to clean. Rumu loves his humans, David and Cecily, before he ever meets them. Rumu loves to clean up his humans’ messes. Rumu loves the cat, Ada, and her messes too. Rumu would like to clean every room in his house every day so his humans will be happy, but Rumu can’t access many of the rooms. He is not allowed. Or the power is out. Or the power is out because he is not allowed. The reasons don’t exactly make sense to Rumu, but he loves the Artificial Intelligence that explains them to him. Her name is Sabrina. Rumu loves Sabrina. But Rumu is also curious even if he doesn’t know what curiosity is. He loves every room of his house, even the rooms he is not allowed in. So he will find those rooms, even if he is not supposed to. He definitely has a little BB8 in him. 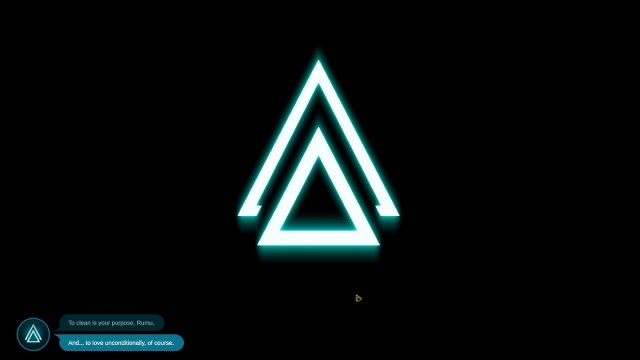 The game tells its story ambiently as Rumu explores his house and cleans up messes day after day. It feels like Gone Home in a very good way, if Gone Home were about Cylon Number 6. It asks old questions about the potential dangers of Artificial Intelligence, the responsibility of Creators to their Creations, you know, the usual. It stops short of the whole “Can a robot have a soul?” thing, because it’s pretty clear in this particular world that the answer is yes. It’s all pretty gross. Mostly though, the game is asking very human questions about very human feelings. The answers are open ended and troubling, but never hopeless. This game looks cute, but it knows what it’s about. Its cuteness does not go unchallenged. 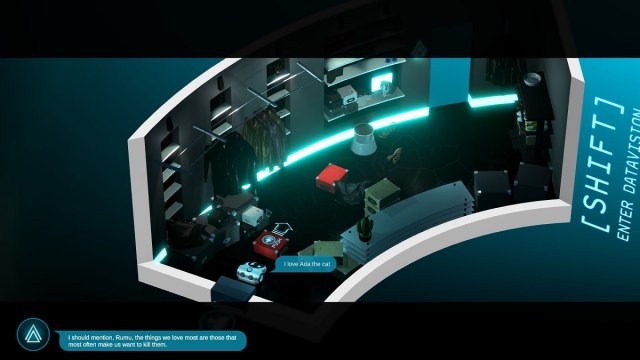 Don’t worry, the cat does not die.

There is a darkness in this game that is evident almost immediately. We, the people playing the game, know better at this point than to trust sterile futuristic environments and calming robot voices. And we assume, correctly in this case, that probably we are not going to be served a game about a vacuum that is only a game about vacuuming. But while some of the story beats are predictable within the first few minutes of playing, they never play out exactly how you expect them to. And, like in Gone Home and Firewatch before it, the darkness never goes as dark as you expect it to. This is a game about a vacuum that is not about vacuuming, and it’s a game about sadness that is not a sad game. I did cry at the end, but I basically always cry at the end. 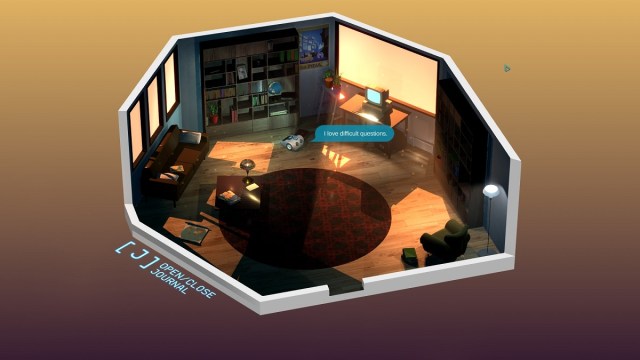 Well, little buddy, you are in luck!

My only real criticism of the game is the price. It costs $20, and the total gameplay is only around two and a half hours. The story is linear, and while there are branching dialogue option, I don’t see myself replaying it. Besides the storytelling, there’s some simple puzzling and occasionally some things that could loosely be called platforming. But mostly you are chugging along at a moderate pace, cleaning up spills and clicking on anything the game will let you click on. The graphics are clean and really nice to look at, but occasionally some UI elements get a little lost behind foreground objects. I guess it’s not much shorter than Firewatch or Oxenfree, which are also $20 games, but this one just felt a little smaller somehow. 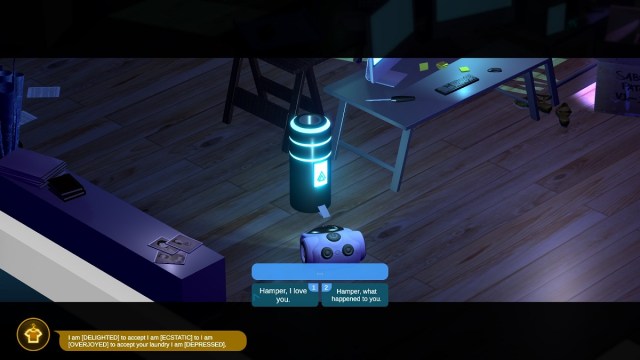 Tag yourself I am Hamper.

I love Roomba. And I love Rumu. And I love Sabrina and David and Cecily and Ada. I love that my Roomba does not love me, and does not have to love me. I love not-cleaning. I loved this game and I think you would love it too.