After Rosewood’s season finale airs tonight (on Friday for some reason), there will have been twelve entire lesbian/bisexual women canoodling with each other on primetime TV this week. Ten already happened! Not bad! Better than the downward spiral we’ve been on! Did you catch:

+ Lucy Hallowell’s recap for The Fosters 414

We’ve got a review of the webseries Brown Girls in the queue for you. Yvonne interviewed the two lesbian writers who worked on the first season of One Day at a Time (it’s so fun and insightful and you’re gonna love it). And Riese is already watching ABC’s When We Rise mini-series, which premieres next Monday, to review it for you.

Here’s what else happened on queer TV this week. 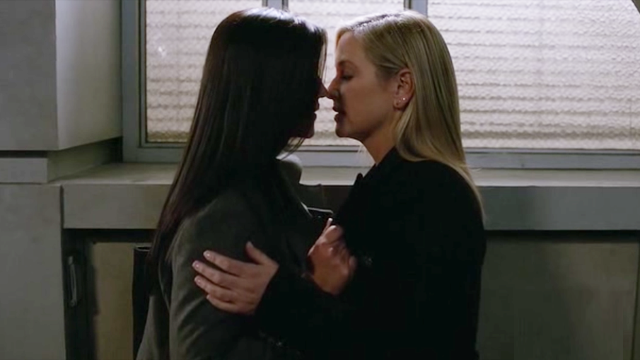 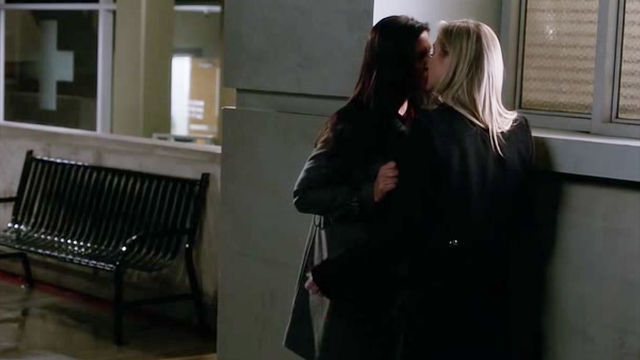 But it’s been eighty-five years since I felt the weight of a woman on top of me.

I wonder how many times in Arizona Robbins’ life a woman has had to tell her to stop talking so they can go ahead and kiss already. Love her or hate her (and the good doctors of Seattle Grace Mercy West are as conflicted as you are), Minnick finally made her move on Arizona this week by telling her to hush and smooshing their faces together. It was a nice speech Arizona was giving, and one Minnick probably doesn’t hear very often. It was about how she’s a good person and a good doctor and a good teacher and the world is a better place because she’s in it. Minnick is so loathed by most of the other surgeons she doesn’t get much (any) positive feedback, so she must’ve wanted to kiss Arizona extra bad to cut off that river of praise.

Their smooch came after a day of Arizona and Minnick flirting about dinner and flirting about patients — and then pretending to hate each other every time someone else walked up. Webber’s interruption was particularly delightful. I confess I do like Minnick, but also I like Webber squinting and scowling and doubling down on calling her a menace. “She’s a menace.”

Arizona cracks in the end because hating people, even for pretend, isn’t really her strong suit (except that one entire season she hated her wife). Minnick likes the angry roleplay, but she likes kissing Arizona’s face even more. Bets on which one of them gets hit by a meteor first? 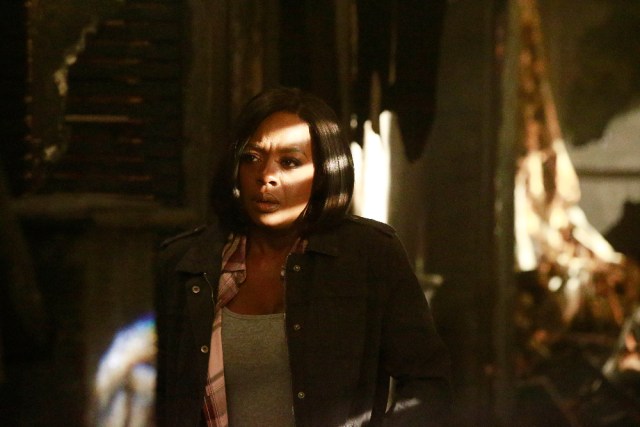 Is that? Why, yes it is: My Academy Award, finally.

This show. As always, I have no idea how to talk about the plot of How to Get Away With Murder. It’s so frenetic and swervy and the two-part season finale wasn’t any different than usual. Everything’s been building to: Who killed Wes and put a bomb in Annalise’s house? And the answer is: No one you’ve ever heard of. In fact, no one you’ve ever heard of under the orders of an entirely different person who means nothing to you. Laurel’s dad hired a hitman for both jobs. Which: Joke’s on your, Mr. Castillo, because Laurel is absolutely pregnant with Wes’ baby. The big question of season four: Will that kid be sorted into Gryffindor like his dad or Slytherin like … everyone else on this show?

I don’t care how dumb the finale reveal was, to be honest with you; I don’t watch HTGAWM for the mystery. I don’t care who gets away with murder. I watch this show because Viola Davis is a once-in-a-generation talent and she makes Annalise Keating one of the most compelling characters in TV history. She better get her goddamn Oscar this weekend.

What did y’all think of this big reveal? Mainstream critics seem annoyed, but our opinions are always better than theirs anyway. 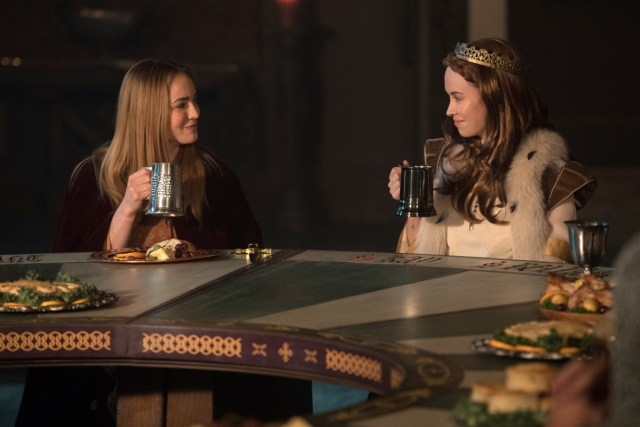 We stopped doing Superqueero roundups after the winter hiatus because between Flash, Arrow and Legends, the only queer woman was Sara, and while she’s been kicking ass and taking names as the new captain of the Waverider, she wasn’t doing much in the way of romancing ladies. Until now.

In last week’s episode, I held my breath for approximately 40 minutes straight, because Sara got shot right in the queer lady killshot, and then also got her neck snapped, but luckily Sara has a little bit of Buffy in her, and death doesn’t really stick. My straight friend was like, “You weren’t really scared were you? They weren’t going to kill Sara.” And I was like YOU DON’T UNDERSTAND.

But anyway she’s fine and better than ever this week when the Legends headed to Camelot. In this version of Camelot — a version Star Girl (aka Merlin) constructed from the legend to protect the piece of the spear she was tasked with keeping safe — King Arthur and his Knights of the Round Table are as you’d imagine, but Guinevere isn’t just his wife, she’s a warrior and the commander, skills that catch Sara’s eye.

After fighting side by side, Sara gives Gwen a pep talk, calling her clever and brave, making the queen’s eyes sparkle. Emboldened, she gives a rousing speech and leads her Knights into battle.

(Another fun but somewhat irrelevant moment was when they realized the spear piece they need is Excalibur and Amaya uses her animal powers to pull it from the stone and Sara, impressed, goes, “Damn, that was badass.”)

Anyway, the Legends join Gwen and her Knights and the battle is won and Camelot is safe.

Sara and Gwen say a private goodbye and there’s a cute “Lance. A lot.” moment that maybe was cheesy but tied the story together for me in that cheeky Legends of Tomorrow way. Ray bumbles in and interrupts their goodbye, but before they leave for good, Ray says every good legend ends with a kiss and leaves her to it.

And so Sara Lancelot sweeps back to Guinevere and kisses her, slow and soft. She says goodbye one last time in that Caity Lotz timber that rattles my bones and leaves yet another lady looking happily corrupted and thoroughly liberated. 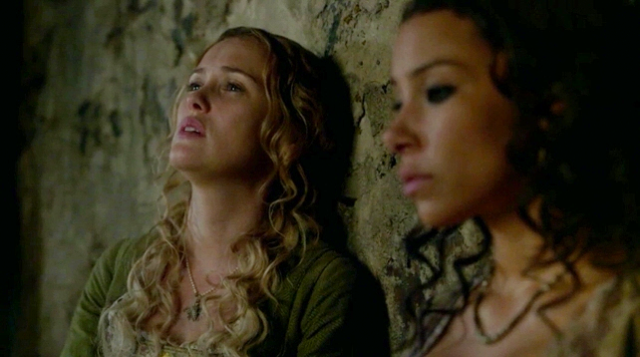 Not too much in the lady-loving so far this season, but there’s a war brewing so that much is to be expected. Plus, our ladies are all on separate sides of things. (Though Max seems to not like sleeping alone; she has anonymous lady legs in her bed at one point.)

Anne went back to her first love, the sea. She doesn’t want to kill Max for breaking her heart anymore, but that mere fact makes her pretty upset. Though last we saw her, in the fourth episode, their ship and been invaded and she volunteered for a below deck fight club situation. She ended up saving her fellow pirates but it left her injured and unconscious and losing a little too much blood for my liking.

Back on the island, Eleanor is trying to regain some semblance of control by working with the government, while Max is trying to work in spite of them. Seeing they don’t have her full support, Rogers sort of comes after Max, starting to cut her off from the business side of things despite their original agreement. But Eleanor defends Max at every turn, including saving her from a bogus death sentence a blobfish of a dude tried to give Max as soon as Rogers wasn’t on the island anymore, foolishly thinking he could undermine Eleanor fucking Guthrie.

In the latest episode, Eleanor decides to hunker down in the fortress until Rogers gets back, and gives her men a list of names of people to get behind the walls, Max being at the top of the list. Eleanor begs bargains and deals to get Max back from Flint’s side of the battle line, trading prisoners to ensure Max is safe. It’s very romantic.

Finally together, without Rogers hovering around, and as relatively safe as they’ve been in a good long time. Eleanor sits next to Max, weary, and apologizes “for today.” Max scoffs. Of all the things to apologize for. Eleanor quietly acknowledges she’s not wrong. A breath of silence. And a question:

Where would we have gone?

I personally felt like I had been struck by lightning but I guess lifetimes have passed for Max since that moment in season one, because she plays it cool. “I was so close to saying yes.” But she had put too much of herself into Nassau, and she didn’t have the tools to cut those ties. Max just looks at her sadly, “What would have been enough?” Why wasn’t she enough?

Eleanor apologizes again, a bigger, broader apology this time. She says they both had dreams for Nassau and their roles in it, but they’re too far from all that now. Plus the men fighting over it are ruining everything anywhere. But maybe, if they work together, maybe they can take something from it.

Nassau will never be what they wanted but if they work together they can take something from it. Because as she tells Flint later, she’s just about had enough.