It’s Boob(s On Your) Tube time! Boob(s On Your) Tube time! The bits and bobs of queer TV, the gays who aren’t dead yet! Welcome back, friends. I sang those first two sentences in my head; I hope you did too. So, hey, TV is back! I confess I haven’t kept up with it so far this year as much I did over the past eight years because that was the luxury of living under President Obama: Strides forward for queer visibility and the peace of mind to actually enjoy watching television. But I’m getting caught back up and I miss you and I want to talk to you about ladies kissing ladies.

I hope you’re enjoying Valerie Anne’s Supergirl recaps, Lucy Hallowell’s The Fosters recaps, and also I hope your ready for The Good Fight recaps, which will be coming at you on Monday from the pen of your girl Dorothy Snarker. (She’ll also be recapping The Handmaid’s Tale for us this April.)

Next week in Boob(s On Your) Tube, Valerie is going to get us caught up on Black Sails and Legends of Tomorrow, two shows with queer ladies who aren’t doing explicitly queer stuff right now, but that doesn’t make ’em straight. And next week on Autostraddle dot com, Mey Rude is going to write about the three(!) trans women on primetime TV right now — Laverne Cox on Doubt, Jenn Richards on Nashville, and Amiyah Scott on Star — and talk about what that visibility means for trans women, especially in this scary political climate.

In the meantime, here’s what I’m getting all caught up on. 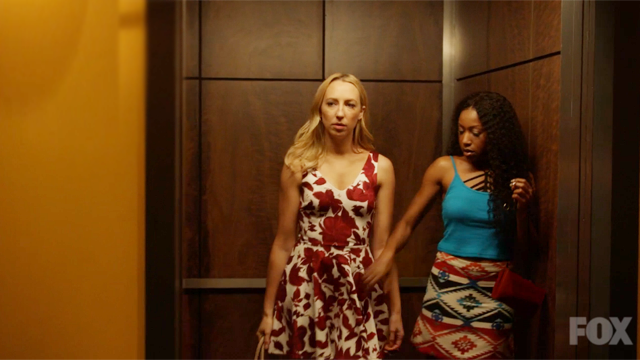 Hey, we’re two gay ladies in an elevator during a musical montage. 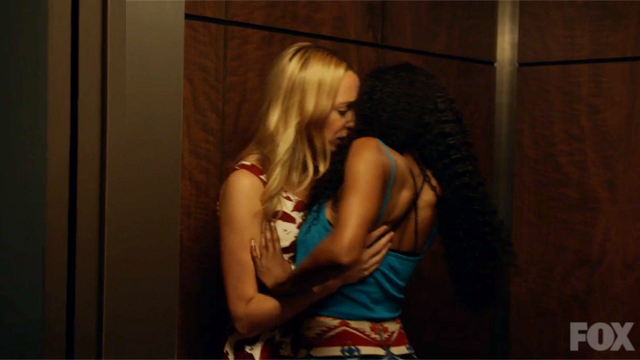 Grey’s Anatomy taught me that means we gotta make out.

I don’t remember when I got invested in Pippy and TMI but I was like a caged tiger prowling around after Pippy grabbed TMI’s hand and pushed her up against the wall of the elevator in the midseason premiere of Rosewood. It happened because they were both a little shaken up about a hostage situation earlier in the day (and also because they’re still so totally in love) and while TMI was a little shocked by the lucky turn of events, she sure didn’t think twice about rolling with it.

Okay, and then they didn’t even talk to each other about it for like five episodes! They exchanged glances every time someone said the word “secret” or “elephant in the room” (a phrase that always works its way into conversations organically in a morgue), but it wasn’t until Rosie barged up in Pippy’s apartment in the middle of the night in this week’s episode that we actually got to see what the heck these two have been up to.

What they have been up to is: doin’ it. Pippy tries to play it cool like, “I don’t know why you’d show up here asking for information TMI has.” And Rosie’s like, “Well, I called her three times and she didn’t answer and so please don’t make me go get her out of your bedroom.” At which point TMI comes zooming out of there with a cardigan wrapped around her, looking hella sheepish. Pippy just looks annoyed. There was wine! And music! And potentially role play (I honestly don’t know what TMI is wearing). 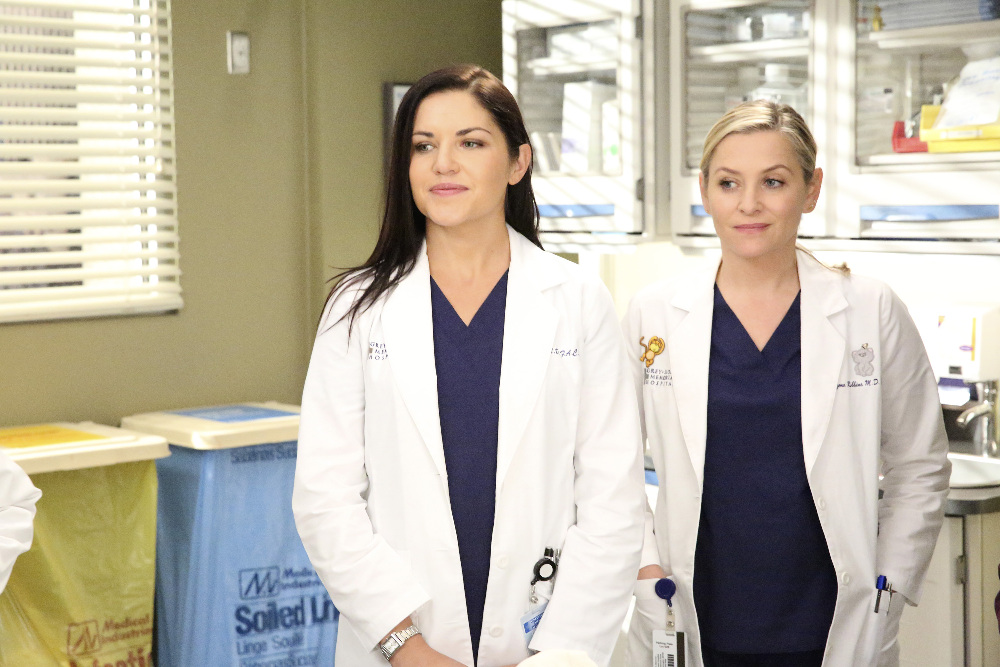 Everyone hates you but loves me, so this should be interesting!

How refreshing was it that when Grey’s Anatomy returned for the first time since the election, it brought with it an episode that centered on all women and women’s issues and there was nary a man in sight? You’d never have convinced me before that week that I wanted a Jo-anchored episode, but Bailey and Arizona mellowed her out just right. In fact, Arizona Robbins has had major screentime all the way around this back half of the season. It’s a welcome relief, even though the “unicorns and rainbows shooting out of her ass” still don’t fill the Callie-shaped hole in my heart.

It looks like Arizona and Minnick are going to be a thing. Last night, despite Arizona’s protests, Minnick let Edwards perform a surgery on a nine-year-old and even though it should have been routine, they lost him on the operating table. Edwards was devastated; she went to Weber and asked if she killed him and Weber hugged her up real tight and said sometimes things happen in surgery that even the most senior staffers don’t foresee. Arizona and Minnick didn’t catch this either and they were there the whole time.

Arizona’s main thing is that Minnick didn’t prepare Edwards for this possible outcome, but Minnick lets down her guard for a second and says it’s because she’s never lost anyone in the OR. This kid was her first. Arizona is shocked and softened and she says Minnick could have friends at Seattle Grace Mercy West hospital if she actually wanted them. There’s some light flirting between them the whole time. It’s not bad. It’s not Callie and Penny. But also: it’s not Callie. 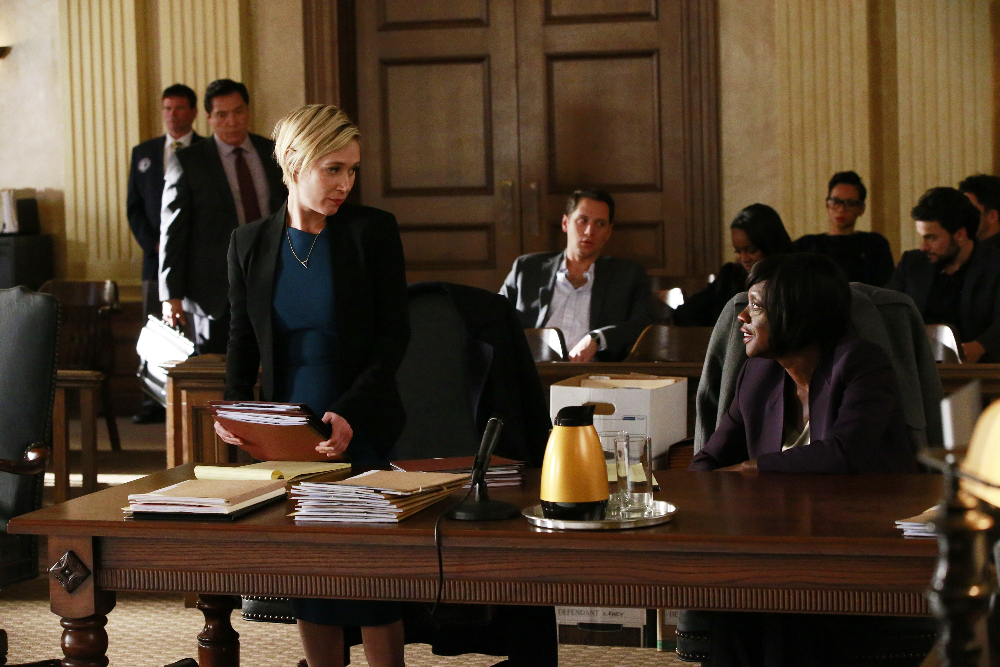 In the case of Paris Geller vs. the TV gods, we find the TV gods guilty of gross underuse and queer storyline neglect.

Can you believe we get to watch Viola Davis and Cicely Tyson act off each other on our TVs in our living rooms and not in an Oscar-nominated film we drove to the theater and paid $15 to see? I said this in our year-end TV round-up and I fully believe it: If there were more Annalise Keatings in the world, there would be no President Trump. A Black bisexual woman who absolutely cannot be shaken down to a single descriptor, given the latitude and depth usually reserved for white dudes on AMC, brought to life by someone as talented as Viola Davis. This should be every network, every night. The world would truly be a completely different place if writers actually explored the complicated motivations of humanity with characters who aren’t white men.

There’s nothing gay happening this season so far, but I can’t not talk about Viola Davis. She has gone from fully depressed and defeated in prison to reclaiming her rightful place on her Slytherin throne and I have felt every single bit of it right along with her. “We’re Not Good People” is the best name of any episode in this entire series. It’s true, but the truth is so much bigger than that. None of the Keating gang are good people, Annalise included, but there’s goodness inside all of them. Annalise suffered sexual abuse as a child, did you know that? Her mother has dementia, did you know that? Her dad is too hard on her and Nate is too soft on her and Eve is the only one who really gets her (maybe Bonnie, too, but Bonnie’s got her own shit to work out), and sometimes you’ve just got to survive.

I’m going to try to watch Star and Imposters by next week. Tell me what’s good on your TV.