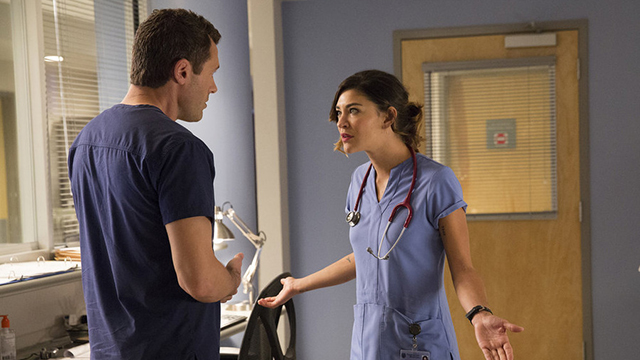 What? I’m so sure you’ve never hit anyone in the face with like a toaster.

Okay, this show is bonkers, y’all. Remember in last week’s pilot when Gretchen convinced that one patient to lie about her symptoms so she could stay in the hospital and get away from her abusive boyfriend? Well, this week Gretchen goes to the house of the abusive boyfriend to get the woman’s stuff, and it does not go as planned. Or maybe it does. I honestly do not know what Gretchen is thinking ever.

The abusive boyfriend pulls a gun, for starters, so Gretchen smacks him in the head with a waffle iron and then later on she ties him up so tight with an extension cord that his hands almost fall off. She dips out then, for a minute, to go meet up with her friend who is helping her scam Medicare and make an extra buck. He tries to ignore her, but that’s a big mistake because she smashes her way into his house through a window and destroys his laptop by throwing it into a fish tank. She goes back to the house where the abusive boyfriend is tied up, and he escapes. So she gets into a car chase with him, runs him off the road, and very seriously considers leaving him there to die! John the Batman tells her she has to save his life because of the hippocratic oath or whatever, so she doesn’t let him die, but that doesn’t mean that she hasn’t killed before and won’t kill again next week.

At the end of the day, Gretchen goes home and sweetly snuggles with her girlfriend.

She is like if Lisbeth Salander and Kate Kane had an angry little baby who grew up to be a healthcare worker inside a Walt Whitman poem hijacked by Flannery O’Connor. She’s too much, she’s not enough. She’s wonderful. And also horrible. But mostly wonderful. 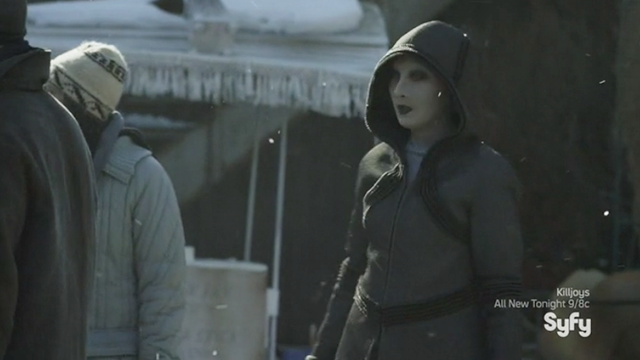 Fuck me. This better not cause another power outage and interrupt my Xena marathon.

Doc Yewll only made the briefest of appearances on Friday night’s Defiance. She didn’t even say any words. There are no other queer shenanigans to report. But I want to show you her five seconds on-screen because it so Doc Yewll. She walks outside and finds the entire town in a state of hysteria because the St. Louis arch has exploded and is raining down around their ears, right, and the people are just running and screeching and body parts are flying everywhere, and Yewll’s face is so unmoved. So unimpressed. Like her main emotion when she sees that the town’s symbol of strength and unity and freedom is crashing to the ground in the form of a billion tons of steel is just pure annoyance. Like she’s trying to watch someone’s grandma use the self-checkout at Kroger. I love her so much. 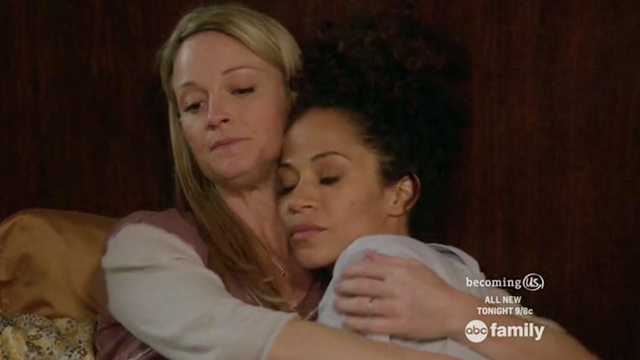 I think we should give Brandon to Mike and keep AJ, tbh.

The Fosters nearly gave me a heart attack last week.

It starts out all cute and zoo-y like every episode, but there’s only one shower this time because of how the ceiling in the kitchen exploded last week and the bathtub fell on top of the stove or whatever tragedy. Fine, NBD. A day in the life, honestly. Okay, but then Stef goes out with one of her buddies to a gay bar that night and guess who they see while they’re drinking and talking about Pretty Little Liars like all lesbians do at cocktail hour? Oh, it’s Monty. Principal Monty. She’s at a gay bar on a gay date, and Stef’s friend, Jenna, wants the hook-up.

What follows is the second most awkward lesbian dinner party after the one when Bette called Jenny’s movie a mastubatory opus on The L Word. Stef invites Jenna, and begs Lena to invite Monty, so she does. Jenna stares at Monty the whole time with love eyes and Monty stares at Lena with love eyes and Lena’s eyes dart around wildly making contact with nothing. After dinner, it’s all, “Did you know she was gay?” And, “Do you think she’d be into dating women?” And, “How would you say she fares on a scale of one to ten in terms of surprise kisses?” And Lena doesn’t tell Stef anything! Doesn’t tell her about the kiss in the finale! Just lets the conversation sliiiide on by.

It was at that point that I almost threw up — but my nausea was not yet complete!

The next day at school Monty goes, “Do you not want me to date your friend Jenna?” And Lena goes, “I don’t want you to date anybody.”

And that fucking sentiment hangs in the air long enough to slaughter ten thousand lesbian hearts, and then Lena finally clarifies that if Monty isn’t dating women, she isn’t gay, which means Lena doesn’t have to tell Stef about the kiss. It’s really upside-down logic, the kind you expect from Stef.

Monty is going to date women, though, because Lena woke up the sleeping homosexual inside her, which is apparently Lena’s spiritual gift. 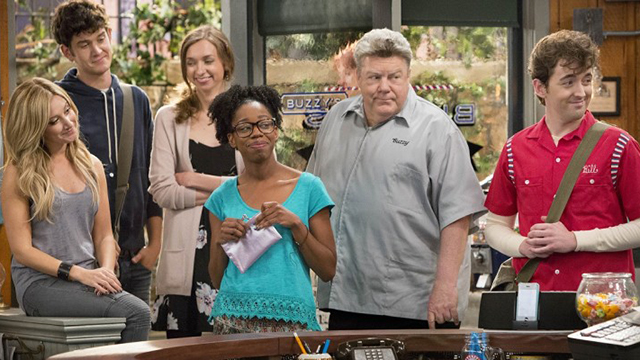 You wanna be where everybody knows your favorite Sam Adams seasonal.

Clipped‘s second episode continued to color in the lines of its characters while toning down their improvised Bostonian accents in a major way — both of which things were very good decisions. Diona Reasonover‘s Charmaine Eskowitz didn’t have much to do this week. The main story revolved around 25-year-old Danni and A.J. giving up on their dreams of becoming a singer/professional baseball player, and Charmaine stepping in to tell them to stop their navel-gazing whining and start living their lives. She also spent some time flirting with a dude in a bar, so it looks like she’s going to be bisexual. I actually can’t even remember the last time we had a bisexual black woman on TV. I guess Maya St. Germain on Pretty Little Liars, maybe? Here’s hoping Charmaine doesn’t have any fake cousins.

For real, though, y’all? Are you watching this? I think you should be watching this. There are never queer leading characters on sitcoms! Watch this!

Lesbian lady Margot made her first season three appearance on Hannibal this week and exchanged meaningful glances with Alana. What I know about these two is what Stacy tells me about these two, between saying, “Don’t look over here at my laptop!” while she’s watching the show, due to all the gore. For example, Margot lives with her psychotic brother and owns a lot of horses. She is gay and slept with a man last year and when queer women told showrunner Bryan Fuller why that’s a problem, he Ryan Murphy-ed it, and trolled them grossly.

Okay, but this year, Margot is going to have a female love interest. Perhaps it will be Alana. Fuller’s #LoveWins tweet from Friday (pictured above) seems mean if it’s not going to Alana. What I know about Alana is she’s mad. Like really mad. So mad! I know it because the whole time Stacy was watching this week’s episode, she kept being like, “You mad, Alana? You mad?” And then she’d look at me and be like, “Alana is mad.”

So Alana came to Margot’s house and Margot was wearing her horse gear and they looked each other up and down like dessert.

… which is probably not a good metaphor for this show. I’m sorry. 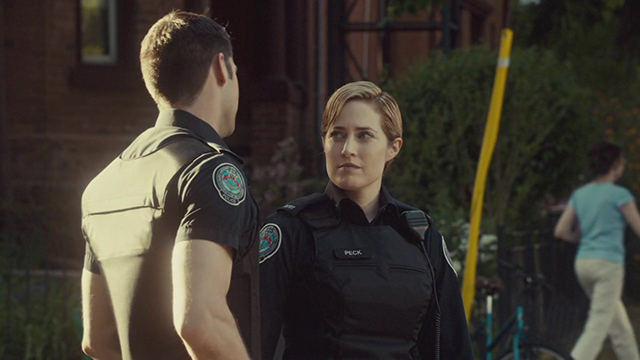 Don’t worry, Netflix swooped in and saved the day. We will get a sixty-seventh season of Degrassi!

Everyone’s favorite Canadian police procedural has arrived back on American TV, and with it lesbian officer Gail Peck, who broke my heart into one hundred thousand pieces last year when she had to let her girlfriend, Holly, go (to stupid California). Gail only had a few moments on screen in the summer premiere, mostly to just set up her storyline for the season, which is going to be: adopting a glorious Canadian baby who will grow up to be a hockey-playing lesbian or a bisexual succubus, like all the best Canadians. She has to make a video for the adoption agency. I hope the video lasts an entire episode and involves outtakes of Gail dancing around in her underwear singing Pat Benatar into a hairbrush.

MTV’s serialized Scream remake, in which Bex Taylor-Klaus plays a queer lady, lands tomorrow night. We can watch the first eight minutes of it right now, though. Or, well, you can. I can’t. Why is there so much damn bloody TV this summer?

+ Orange Is the New Black Episode 304 Recap: Butch Please, Life’s A Butch, Etc.
“Yes, I’ve been ousted from Internet retirement by the sweet harkening of a fellow bulldyke on TV. And truly, I was not disappointed.”

+ Orange Is the New Black Episode 303 Recap: The Double Reverse Jinx Strategy
Poussey and Taystee hold a funeral to honor the books martyred in the Conflagration of Three Days Ago. Piper and Alex have more hate sex. And Nicky self-destructs.

I’ve got a full-on glorious season three Orphan Black roundtable coming at you tomorrow. We’re talking queer themes, feminist themes, and that goddamn death that I’m still not over.