The video, titled “Family is Still Family, Love is Still Love,” begins with a woman named Rosetta Lai looking straight into the camera, wearing a bright pink blouse and dangling earrings. She says, in Cantonese, “I am proud of my daughter. I’ve always been proud of my daughter. It’s time to take a stand to really support your children, my children, our children. Share your story of love and acceptance for lesbian, gay, bisexual and transgender children. After all, family is still family and love is still love.”

This PSA is one of nine multilingual videos produced and organized by the Asian Pride Project and the National Queer Asian Pacific Islander Alliance (NQAPIA). These PSAs are all a part of the Asian Pacific Islander / American (APIA) Parents Who Love their LGBT Kids campaign, which includes families coming together to publicly support their children in a number of different languages and dialects, including Mandarin, Cantonese, Hindi (in Hindi with English Subtitles and English with Hindi subtitles), Korean, Japanese, Vietnamese, Lao and Tagalog.

These videos are not only available on YouTube, but are also airing on Asian ethnic TV stations in June on stations including KSCI-TV (or LA18) in Los Angeles, KTSF in the San Francisco Bay area, AAT in Seattle, Crossings TV in Chicago, New York and Sacramento. The campaign is aimed not only at the LGBT APIA children, but also their families — the campaign attempts to connect with not only people who have access to internet, but to older generations who might have more access to media through Asian-language television stations.

Elena Chang, a co-director for the Asian Pride Project and the producer and director of the multilingual campaign, had accessibility and viewership in mind when deciding to air the PSA on Asian language television stations.

“How do we target some of these Asian families that may not have as much access to the internet? Well, they watch TV,” she says. “They might not be watching Fox or Channel Seven, but a lot of them with language barriers, they do stick to DramaFever, or some of those Sing Tao shows. They have Filipino cable networks. So we were like, let’s try to get in on that.” 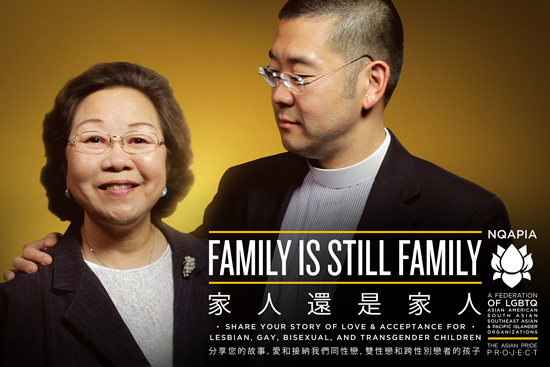 What struck me as a particularly affecting and culturally aware angle is the campaign’s emphasis on family above all else. The campaign is not just about accepting LGBT APIA individuals, but about families coming together to support their children. “[We wanted] to put some brave parents out there to show that it’s really okay to love your queer child, and at the end of the day, the quote is ‘family is still family,’ and family has always been such a strong part of Asian cultural identity,” Chang says. “We wanted to emphasize children. We wanted to emphasize family — mother, father.”

In all of the videos from the campaign, family is emphasized through the appearance of mothers and fathers speaking together to support their children. One video stars Kamlesh and Harcharan Bagga coming together and speaking alongside their gay son. The three of them stand together as they say, in Hindi, “Family is still family.” Phandia Phivilay talks about her lesbian daughter in English with Lao subtitles, Clara Yoon speaks in Korean about her transgender son, and Vinay Chaundry speaks to his genderqueer child in English with Hindi subtitles. The videos each demonstrate the love, support and willingness of APIA parents to publicly speak about their LGBT children. 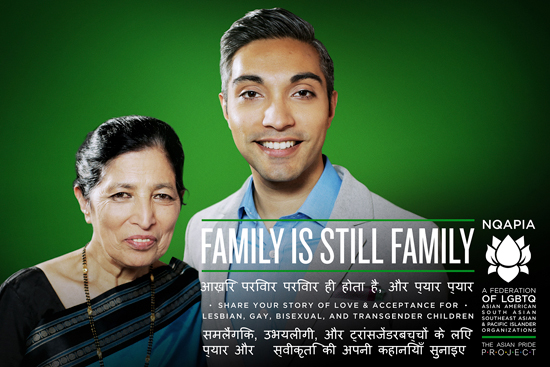 “Something we quickly learned was that families go through a coming out process to support their queer children. They have become the representative [for LGBT families in their communities], like Clara Yoon [who speaks in the Korean campaign], Deana Cheng [who speaks in the Mandarin campaign]. People in the LGBT community and straight community are able to identify who these people are,” Chang says. “All these parents are really brave because someone like Clara, she goes to church. If her PSA is playing on a network, people will see her. And the fact that she is able to step up and do something like that is just really, really brave.”

While all of the videos use approximately the same script, each video contains a parent speaking from the heart about their child, and emphasizes the phrases, “I’m proud of my child. I’ve always been proud of my child.” The look in the parents’ eyes as they said these lines, no matter if I could understand the language or not, made my heart swell — each parent always looks like this isn’t a scripted line, it’s something they are saying from their heart. 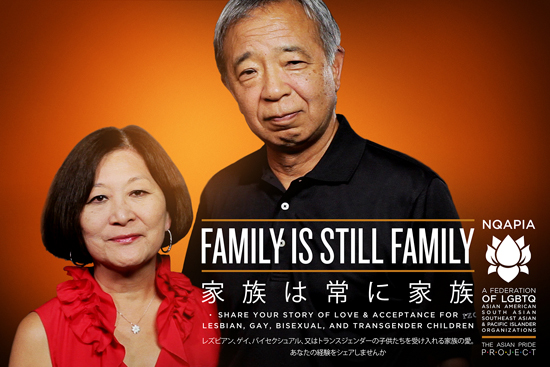 As an APIA person with a non-native English-speaking family who has not always been accepting of me as a queer person, seeing these APIA parents speak so honestly about their love for their children is so important for me, and families like mine, to see. The campaign’s message — that LGBT people are not alone, and more importantly, families of LGBT people are not alone — hits me in my heart, especially as a person whose family didn’t know that having an LGBT daughter was something that they had in common with other people in the APIA community. The campaign’s emphasis on families speaks to me, and I hope that other families will watch these PSAs and see that having LGBT children is not a lonely, estranging thing, but something that can bring families together.

“In Korean, there’s this saying … which means ‘Don’t do anything that would make people look at you twice.’ And I think that says a lot about how a lot of immigrant families in the United States tend to think,” Chang says. “You go with the whole, you go with the group — anything that moves away from that is scary. It’s scary and it’s new … I think it’s really powerful and I want to use that type of energy and apply it to something that is queer-friendly. You want to talk about being like the group, as a unit, right? Let’s emphasize that,” she says. “Instead of worrying so much that your child is different and people are going to talk about your family because someone is ‘dysfunctional’ [for being LGBT] how about we try to flip that mentality and apply it to … let’s be collectively conscious and loving to one another?” 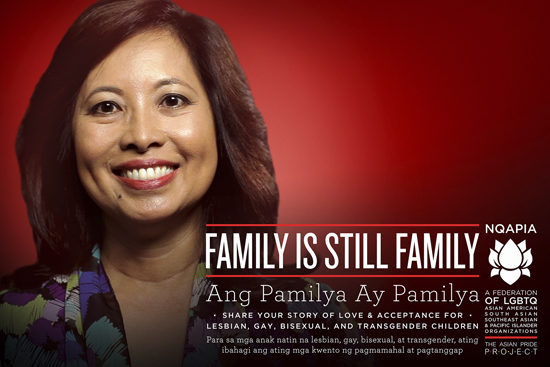 The emphasis on family coming together in this campaign is not just to emphasize how APIA families can be loving and accepting, but also to acknowledge how some APIA families can have a difficult time accepting their LGBT kids. Chang is speaking from her own personal experiences when she was putting together the campaign. “I lost a very good friend of mine very young, and a lot of it had to do with family. I’m not just doing this for her — I feel like even if people don’t take their own lives, a part of you dies inside when you do not have some kind of acceptance within your family,” she says.

“I’m lucky because for the most part my family has come around, but it took a lot of work. It took a lot of work. I feel like now that they have come around, it is my responsibility to not take something like that for granted and do whatever I can to make the road less crazy for others. Because I just know that once my father came around to accepting me, I just felt like I was truly free,” Chang says. “And if I felt like that with one member of my family, I can’t imagine what other folks feel like when their whole family does not accept them.” 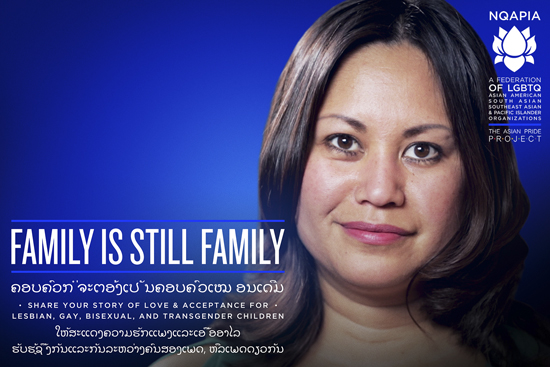 The API Parents Who Love their LGBT Kids campaign is not only attempting to make these messages of family, acceptance, love and belonging accessible to older generations of API individuals with language barriers through these videos, but has also put together a series of one-page, printable “fact sheets” that have been translated into “19 Asian languages and scripts — the largest number of languages ever translated from a single LGBT document,” according to the NQAPIA website. The fact sheet is available to download in English, Hindi, Bengali, Gujarati, Punjabi, Urdu, Tagalog, Ilocano, Khmer, Hmong, Lao, Vietnamese, Indonesian, Arabic, Chinese (both simplified and traditional script) as well as Korean, Japanese, and Thai.

The multilingual video campaign is not just about finding ways to support APIA individuals, but families, too. “We realize that we’re not just making these videos for young gaysians [gay Asian people]. We’re making these videos for families — straight allies. We’re filming these families for families — it’s not just a queer resources,” Chang says. “And I think that’s what sets Asian Pride Project apart from a lot of different LGBT organizations. Because we’re not just here to serve the queer youth — we want to, obviously, but we realize that in order to serve them we need to bring the families in.” 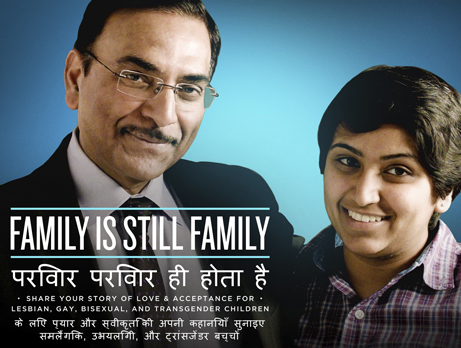 As an Asian-American woman with a Cantonese-speaking family, hearing Rosetta Lai say she is proud of her daughter in Cantonese is incredibly affecting, and watching these PSAs brings me to tears every time. To hear these words being spoken in the language my mom, dad, grandparents and aunts and uncles speak means the world to me. When she looks into the camera and says “I am proud of my daughter. I’ve always been proud of my daughter,” it’s almost like she’s speaking to me, and my family, too.

Visit the NQAPIA website for links to the video PSAs as well as the “Family is Still Family, Love is Still Love” translated fact-sheets.