It’s Boob(s On Your) Tube time! As summer TV gets to swingin’, Natalie wants me to remind you that Quiet Ann’s very special episode of Claws airs this Sunday, so get excited for that! This week, the Facebook Watch show Strangers came back and I still love it. Also Riese got addicted to a whole other Facebook Watch show called Skam Austin! And Kayla recapped a pretty dang queer episode of The Bold Type. 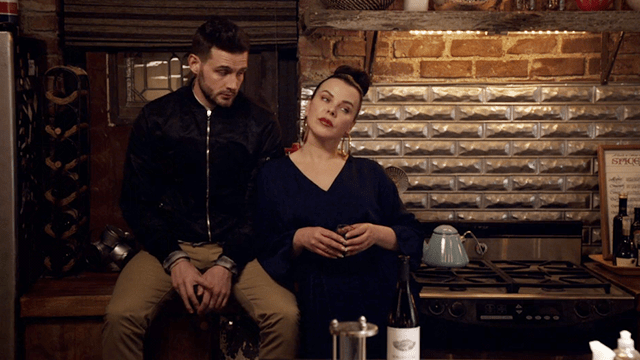 And then Evan Rachel Wood ended the season inside Tessa Thompson.

Summer is actually officially here now because I’ve had time to catch up on my silliest TV pleasure — Younger! I say it’s still because it’s silly how much I love this show that is essentially just a straight love triangle with some occasional Maggie thrown in for comic relief and my own personal delight. Sutton Foster really is some kind of magician with her charm and wit and her whole entire deal with her perfect face. This season, her secret is out! To Charles, at least, thanks to Younger‘s George R.R. Martin and Charles is being a little baby brat about it in a way I frankly did not expect. We’re not President Fitzgerald Grant levels of pissbaby here, but he’s being petty and vindictive and not thinking at all about the people who work for him and count on Empirical/Millennial to, you know, live. He goes from passive-aggressive to aggressive-aggressive to storming into Liza’s meetings and taking her projects. It is not a good look. Honestly, Josh, a 28-year-old washboard-playing tattoo artist whose shotgun green card marriage in Ireland has already fallen apart, is looking infinitely more mature than this guy.

Or maybe I’m just feeling soft on Josh because Younger has finally paired him up with Maggie! Not romantically, of course, but these two have always had great chemistry and always had each other’s backs, and their relationship has existed outside of Liza, which makes them a perfect character match, especially at this moment, because Liza’s drama is all Empirical/Millennial right now. When Josh tells Maggie he’s going on a sex/booze detox due to his broken heart, Maggie literally goes, “I think there are steps you can take that are less Amish than that” and then teases him when he kisses a dog that it’ll be he last smoochin’ for a while. Hey, but the dog in question is kind of abandoned and so he and Maggie set off into the night in Williamsburg to find his owner. (“I just want to remind you the last stray you picked up, you married her,” Maggie zings!)

Obviously Josh sleeps with the puppers’ owner and when he goes to Maggie’s to confess, she just pats him on the knee and gives him a glass of red wine and tells him it was the right thing today; she hasn’t fasted from sex or booze since grade school, okay, and she’s doing just fine.

In other news, Diana is falling in love with that plumber again and Kelsey remains too good for every dude who bats his eyes at her. 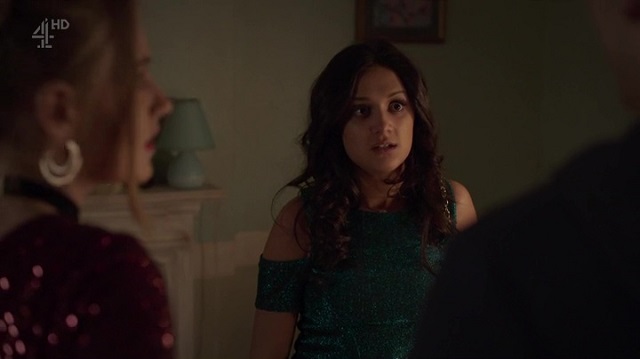 Nasreen’s hunt for a new lady love continued this week on Ackley Bridge and she starts using a Grindr-like app to aid in her search. When the app lights up during lunch with her BFF, Missy, the girls track the proliferation of lesbians to a nearby soccer field (natch!). Missy and Nas take the pitch with the soccer team during their next practice, hoping to suss out which of the girls plays for Nas’ team. One high tackle later, Nas scores herself a date. It does not go well. In fact, it goes so badly, rather than going home with her date, Nas escapes through the bathroom window. Missy’s waiting for her in the alley and they laugh hysterically, as they pile into her half-brother’s car.

The whole situation is so funny that, for a brief moment, Nas’ mask slips and she drops the wrong pronoun… in front of her half-brother, who she’s only known even existed for a few weeks, and who definitely does not know she’s gay. Nas is mortified, Missy silently offers encouragement and Aaron tries to excuse himself from the awkward silence.

“I’m gay,” Nas admits. She steels herself for the backlash — anticipating his disapproval — but it never comes; Aaron doesn’t care who she likes.

“A couple of weeks ago, I didn’t even know I had a sister so it’s all just a bonus,” Aaron tells his sister, her eyes brimming with tears. “Look, I know you didn’t plan on telling me any of this but I’m dead glad you did.”

This was a great episode for Nas — Amy-Leigh Hickman was so good in cycling through Nas’ emotions in a short amount of time — we may not have a girlfriend for her yet, but seeing her expand her support system and build a relationship with her new-to-her brother was still great to watch. — Natalie

So, I finished this season of Westworld and have no more clarity than I did in the middle of the season. It’s frustrating but I will try to focus on the things I did understand/like. For example, Evan Rachel Wood Bisexual. Just like…everything she was doing this season really did it for me. Every time she got shot and didn’t flinch I got gayer. Tessa Thompson and Thandi Newton are unstoppable. It was so nice to have Shannon Woodward back for a while. It could have been gayer. It SHOULD have been gayer. They spent too much time on Douchehat and not enough on literally anyone else. The acting was phenomenal all around, some of the shots were really beautiful. But I feel like I want someone to re-cut the whole season chronologically to help a sister out.

Also I swear to Dolores if the whole season was a simulation I’m going to riot. I don’t think it was because I think Westworld is better than that but I wanted to make that declaration.

At some point this season I wasn’t sure if I was going to watch season three, but the season ended with Dolores and a Hale-shaped host, and there’s a small possibility that Dolores put Teddy’s brain ball in her, which COULD be interesting. Only time will tell if this show will finally be as gay as it should be considering it has bisexual icons (bicons, as they say) Evan Rachel Wood Bisexual and Tessa Thompson at its disposal. — Valerie Anne

Dear reader looking for Detroiters coverage, this week was Carmen’s birthday and we had to pull her away today for that Tessa Thompson beat, but she’s thinking of you and will write up a thing for you next week!