Happy Monday, butternut squash souffles! Welcome back to your weekly round-up of queer-themed teevee. Last week, I rolled out a plan to write one thousand full recaps for you, but fell very short of my goals because I was stricken with Post-Camp Plague (including pink eye!), and also because there’s just too much queer TV to fully recap right now. It’s taking up all my hours, and I have other things I want to write for you! There are so many things to say about Miley Cyrus, for example. So many personal essays that need to be stitched together. I haven’t Photoshopped any cat posters for you in months!

So, Riese and I have talked it over and decided to move The Fosters to this column, instead of doing full recaps, so I can try to get Pretty Little Liars done the day after the episode airs, and do right by Orphan Black. And also, Riese and Gabby and I are tag-teaming hard to get your Orange Is the New Black season three recaps up in a timely manner. So, that’s the plan for now. That’s where we are.

Also, if you’re looking for the place to discuss your Orange Is the Black feelings, you’ll want our FRIDAY OPEN THREAD!

Here’s what happened on the television last week.

We’ve been talking a lot about Sense8 because a lot of our writers and editors are marathoning it right now, and they have lots of different opinions and feelings, so expect a recap/review from Mey and some other folks real soon! 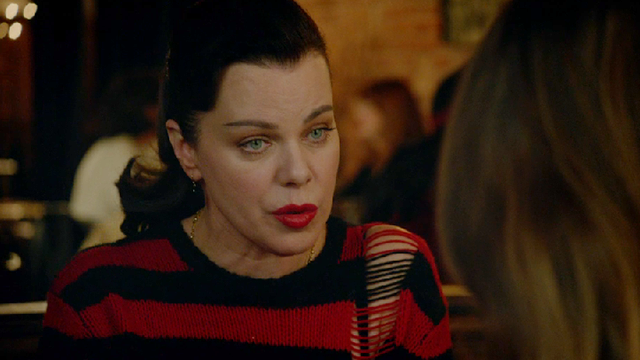 It’s never too late to switch teams, you know. Ellen is 15 years older than Portia and nobody blinks. 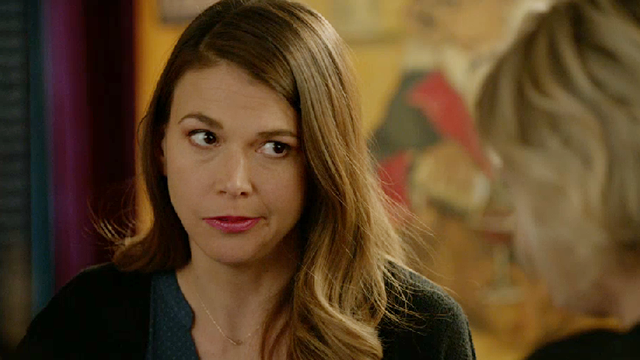 I think the second season is setting up for more of her, though! At the end of the finale, Liza’s daughter decided to move to Brooklyn to live with her mom and Maggie for a while. And also, Liza confessed to her boyfriend about her Big Lies, and they dealt with it and made up, so that should pave the way to more interactions with her lifelong best friend in the future. And I’m still not giving up hope for a Maggie/Lauren May/December love affair.

It wasn’t a deep, thinky first season, but it was a enjoyable one! It’s on TV Land on-demand, if you’re looking for a breezy way to spend an indoor weekend this summer. 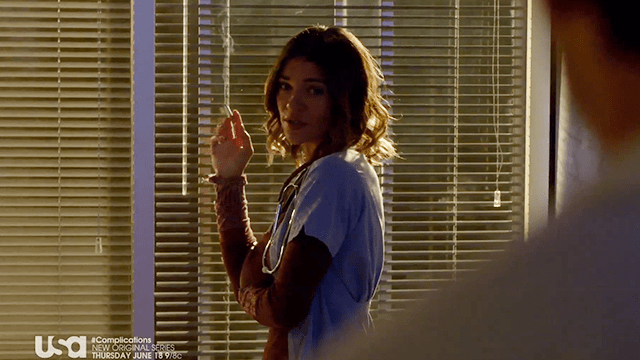 One more “XOXO” joke and I break your nose.

Jessica Szohr arrives on the series premiere of Complications this Thursday night, but you can go ahead watch the first 15 minutes of the show right now over at USA’s website page. It seems like a Batman origin story so far: Rich white guy works out the trauma of losing his family by becoming a vigilante. But Szohr’s few minutes of screentime as Gretchen Polk make me love her already. She seems like if Daria Morgendorffer were a lesbian nurse, which is basically all it takes to make me buy an engagement ring, if I’m being honest.

We’ll talk about the show more fully once the episode airs. 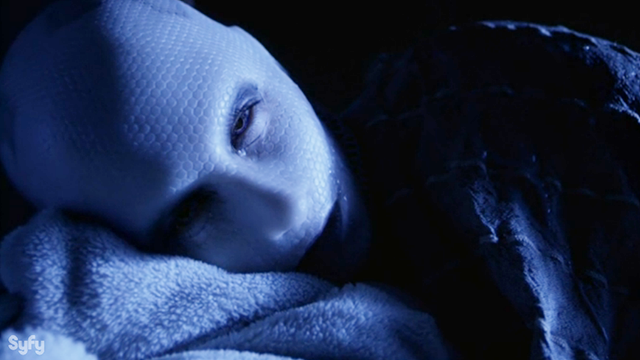 On Friday, Defiance opened its third season with a decisive, two-hour swing for the fences that left me slack-jawed and creeped out and mesmerized and even more smitten than I was last summer. This is one of my favorite science fiction shows ever, and my for sure favorite thing airing on Syfy these days (sorry, Lost Girl!), but it struggled during its first two seasons to figure out what, exactly, it wanted to be. A sci-fi western? A latter day BSG/Caprica-esque rumination on the meaning of life, with space stuff? A third-person shooter video game tie-in? Or a hardcore post-apocalyptic drama about the realities of multiple alien species living with humans on a busted earth after a world war that nearly destroyed the entire galaxy?

“The World We Seize” and “The Last Unicorns” settled firmly (and correctly) on that last thing. It added layers to every character by forcing all of them to make duplicitous and dubious choices for the greater good of their families, or the greater good of Defiance — except, ironically, lesbian Indogene doctor, Meh Yewll, who has made zillions of grey-area choices over the years and was forced to give up some of her own skin this week to heal a member of a new, hostile alien race that showed up in Defiance with the tools to mine the gulanite the town needs to supply itself with electricity. I say “ironically” because Yewll was part of a whole lot of shady doings during the war to ensure the survival of the Voltan, and even cloned Amanda’s sister and implanted a memory-fucker device in her brain to save her own life just last season, so it was very bizarre to see the tables turned and Yewll’s cool autonomy stripped away so quickly. Hopefully her ghost wife comes back to help her process her revenge.

Everybody’s double-crossing everybody, and everybody is going to pay!

Also, it’s worth mentioning that Jaime Murray’s Stahma Tarr is one of the best sci-fi characters of our time. She is a badass Slytherin feminist whose story arc during the first two seasons was so satisfying, and so surprisingly queer that it felt like breathing clean air for the very first time. Her feminist awakening happened in the bed of Mia Kirsher, y’all. It was outrageous and fantastic and I just want more, more, more.

+ Orange Is The New Black Episode 301 Recap: All About Your Mothers
IT’S HERE. WE’RE ALL HERE TOGETHER AND IT’S HERE.

+ FRIDAY OPEN THREAD: Your “Orange Is the New Black” Season 3 Feelings Go Here!
It’s live! Tell us all your feelings, and we will tell you ours!

+ Fan Fiction Friday: Get Your Six-Legged Monkey Crawl On With These 8 “Defiance” Fics
“Stahma Tarr has undergone one of the most remarkable patriarchy-smashing story arcs I’ve ever seen, just a straight up Squib-to-Slytherin transformation that actually all started when she fell in love with another woman.”

+ 26 Excerpts From Scathing Amazon and Netflix Reviews Of “Orange Is The New Black”
“Two sets of breasts in the first 50 seconds told me not to bother.”