Previously on The Fosters, Stef and Lena tried to find the balance between saving all the world’s children and being sexy lesbian wives who are in love. Monty, the new vice-principal at Anchor Beach, made it weird the way straight girls do when they put their face close to your face and splash all their intimate feelings all over you like spilled champagne and act like it’s NBD WHATEVER because they’re straight. “Straight.” Lips touched lips. It was not good. Callie’s life was just one shitshow after another, until her birth dad finally checked his entitled straight white rich guy wanktitude and signed the papers letting Stef and Lena adopt her. Mariana learned to code and began her ascension toward the presidency of the galaxy. Connor and Jude held pinkies, kissed on the lips, played Minecraft in bed together, and only one of them got shot, and only once, and it was just in the foot, and that’s progress! Jesus wrestled and took off his shirt a lot. Also, there was a fatal car crash. 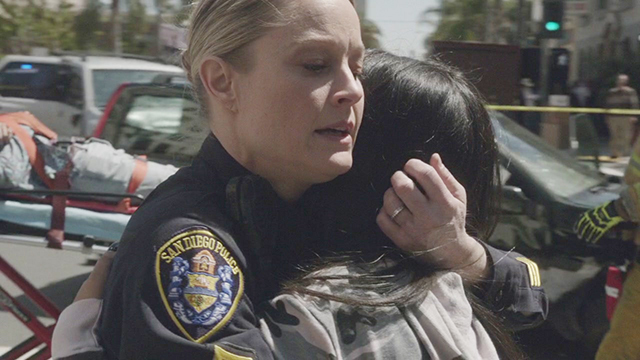 I love all of my children equally!

Stef wakes up from a PTSD-induced nightmare about what happened after the season finale, when she arrived at the scene of the car crash and Mariana was all bruised up but Jesus was getting wheeled away into an ambulance all covered in blood. Lena stirs and asks her what’s wrong and Stef’s like, “I’m having a hard time sleeping because I’m obsessing over all the things I can’t control that can hurt our children. ‘Hero’ and ‘Mom’ are two of the three main circles in the Venn diagram of my whole self, and I’m starting to realize there might not be as much overlap there as I thought.” Lena kisses her face and big spoons her and assures her that she is a very good hero and a very good mom and very good HeroMom and together they can face all the things neither of them can control. 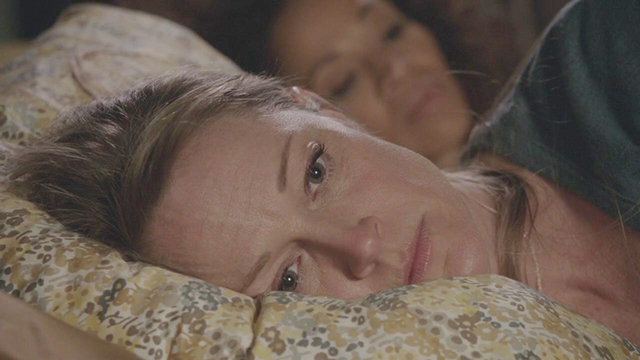 I don’t really care for Brandon.

Has there ever been a lesbian less interested in talking about her feelings than Stef? She’s the rarest species in the entire Queer Animal Kingdom.

Adams Foster Breakfast Express. Stef and Lena call Jesus at Wrestling Academy and pass the phone around to all the children so they can talk to him for a while, since he’s definitely alive and not dead from that car crash. In fact, no one is dead from the car crash. Ana got walloped, but she’s okay and so is her baby. Mariana will be helping her out for a while. Callie’s okay, too. She’s been approved to do an independent study at the foster kids center to help her fill out the credits she needs to graduate. Jude has grown two unicorn sizes; he’s also good. Everyone is good! 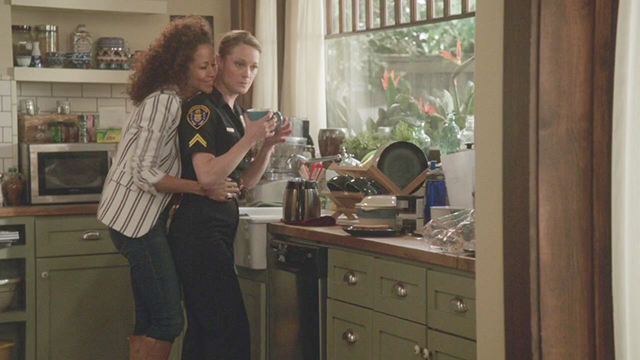 Quick smooch before the zoo opens!

Well, except for Brandon, who cannot believe he’s got to drive to his elite music camp, instead of taking a chartered jet or sleeping on site in the Jay-Z Suite.

While the standard morning hullabaloo is going on — I honestly don’t know how they do it; I need two hours of complete silence and two cups of coffee before I even interact with the cat — Monty texts to ask Lena kind of coffee she can bring her, and Mike arrives to talk about how he and Stef are investigating the car crash that hammered Jesus and Mariana. (Spoiler alert: Neither of these things are wise ideas.) Finally, everyone zooms off to their own summer business.

At Anchor Beach, for some reason. Summer school? 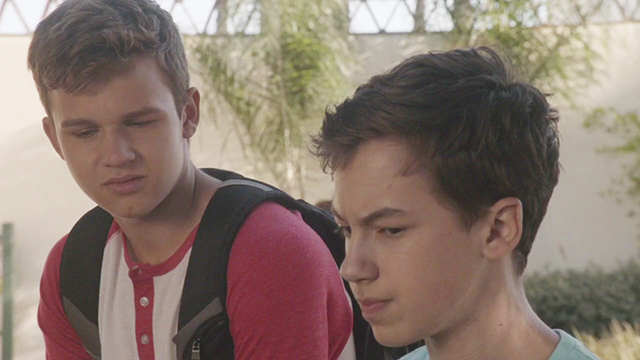 Are we going to announce that we’re boyfriends, or do you think people will just infer it from see us holding hands and kissing?

Connor: Hey, Boyfriend!
Jude: Hey, Boyfriend!
Jude: How about let’s tell no one about this, though?
Connor: Wait, for real? ‘Cause, like, your moms are lesbians and everyone’s cool with it. Monty is obviously super queer for Lena, and no one seems to mind. The Supreme Court is about to rule in favor of marriage equality. And I mean, have you ever even been on Tumblr?
Jude: I don’t know. I’m not feeling being loud about it.
Connor: You’re kind of stomping all over the sacrifice I made of getting shot to make out with you, dude.
Jude: I have to go do things somewhere else now, bye.

The so-very-true-to-life juxtaposition of Callie and Brandon’s worlds continues to be one of the least talked about but most interesting parts of this show. Callie is on her way to work at the foster center when she gets street harassed by this dude who turns out to be a foster kid himself, a thing Callie only finds out when he shows up at the center, hungry and looking to use a computer. So you know what she does? She makes him a sandwich and talks to him about his life in the system and his brother and how they made up a superhero to signal each other and communicate when they were trapped in separate homes. Afterwards, Rafael is like, “You’re so otherworldly empathetic and generous with your heart and but also hard in the places you need to be, I think you’d made a very good social worker.” He also tells her not to ever leave Chekhov’s Spray Paint Cabinet unlocked in the presence of the foster teens.

And Brandon, he goes to fancy music camp in the woods, where he finds out he wasn’t accepted for being a pianist, but was, instead, accepted for being a composer. So he stomps to this classroom to be by himself and play the piano angrily and sulk, when this whole other composer named Kat comes in and compliments his mad “rock star” skills — okay, but that’s before she finds out Brandon is going to be her composing partner for the summer. She has a fit! It is a fit worthy of Brandon’s fits! They should hook up and get married and have so many fits about how hard impossible is when you don’t get praised for doing classical music the way you want to do classical music! 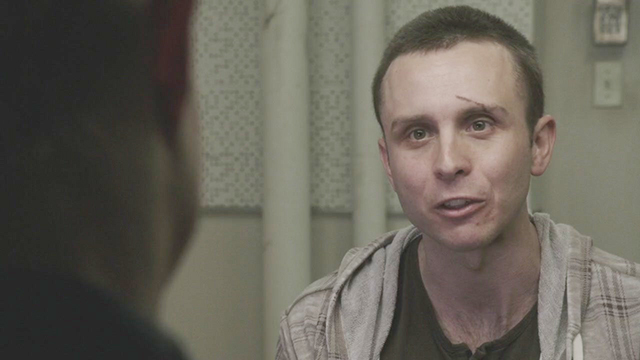 Mad Max is a propaganda film that promotes a matriarchal society! 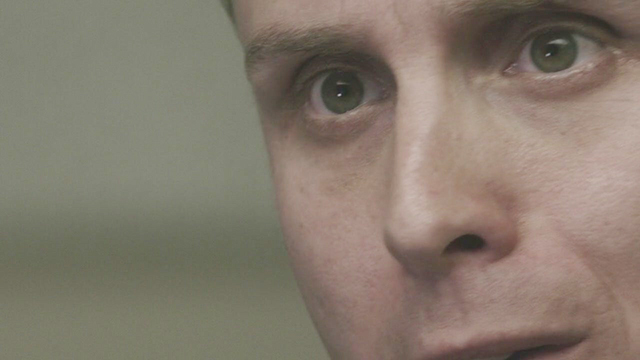 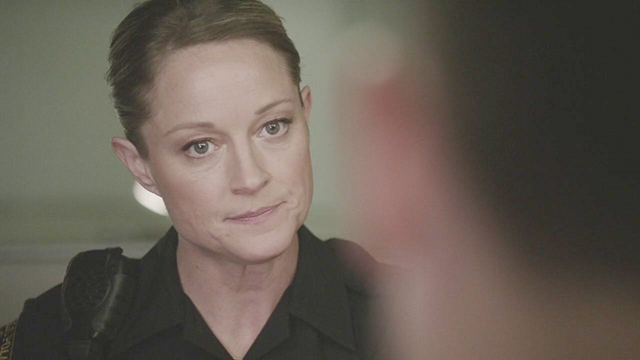 In the real world, Stef and Mike do some investigating about the car accident. The guy who owned the truck that smashed into Ana’s car, well he reported it stolen after the accident, and also he’s got a son he conveniently did not tell the police about when he called in his missing truck. Stef wants to murder him right there on the spot, one less person in the world threatening her baby bears, but Mike guides her away before she can dismantle him. Their next stop is the son of the guy who owns the truck. He gets squirrely with Stef and so she decides he’s the one that smashed into her kids, and so she’s going to deal a swift blow of justice to his face. She’s halfway there when Mike, again, talks her down by explaining that this kids’ prints are not in the truck. So, thwarted once more, Stef just goes to the junkyard where the two cars are being kept and sets the truck on fire.